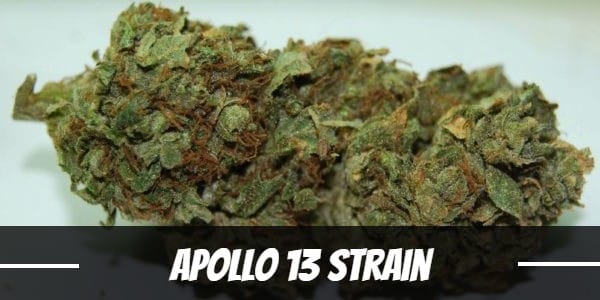 Apollo 13 refers to the lunar mission in 1970, but with everything the strain can do, leaving users spacey is not one of them… usually. Like many Sativa-dominant strains, it delivers a mental high that induces creative thinking. For most people, the buzzing head high does not cause one to be impaired. But once the tolerance limit is breached, then the users do travel in space as the psychedelic effects kick in.

Apollo 13 is a rare cannabis strain that is extremely hard to get a hold of. Since its creation, it has remained one of the most sought after strain. Apollo 13, Originally bred by Brothers Grimm using two of their own esteemed strains Princess 75 and a phenotype of Jack Herer, is itself a legendary strain.

Originally, there were only 500 seeds released by the breeder. If it were not not for the efforts of other breeders in keeping this strain alive, who knows if it would still exist today? Over the decades, even as it went through different generations, Apollo 13 continues to retain its best traits and potency.

Apollo 13 is a Sativa dominant strain. What cannabis connoisseurs should be aware of is that there is also an Indica-dominant variant that goes by the same name.

In the past, going to space is impossible for most of us. As space travel becomes commercialized, only the richest can afford to. So, for us to go to space, there is the Apollo 13 which could take us on an amazing joy ride. Still, this is not an easy strain to find. But what happens when one were to acquire some and use it?

As the mental high kicks in, users start to feel good. No big deal here as this is what most Sativa-dominant strains do. As it continues to intensify, users now start to feel euphoric and extremely happy. Again, there is no surprise here.

Like drinking a cup of double espresso, Apollo 13 also provides a boost in energy. Now, this is where the strain is different from many others. Instead of feeling spacey, users tend to have a clearer mind with better ability to focus. For most users, they tend to feel giggly and much more sociable.

Be careful, though. Apollo 13 is still a spacecraft. Uncontrolled, there is a tendency for psychedelic effects to kick in. Once that happens, think about the spacecraft returning to earth without anyone in control.

Apollo 13 has a very peppery and earthy smell in a pleasant kind of way. What makes it uniquely interesting is the sour tone of citrus blended in. Admittedly, its scent may come off as a little too much for some people.

Although it does not have a great aroma, it does do a little better when it comes to its flavors. Instead of the more distinct earthy smell, it has a sweet taste of tea that would have been much nicer if its smoke were a little smoother than it is.

On using Apollo 13, one question is if the users can handle it. This is not an easy strain for some people as it comes with negative reactions that are more nuisances than anything more serious. Even so, a nuisance is still a nuisance.

To begin, there is the matter of getting a headache from its use. It does not happen to everyone, but it is also not to be ignored. As a way to reduce that, stay hydrated. Drinking a lot of water should lessen or eliminate chances of headaches, as well as having dry mouth and eyes.

Like many strains with buzzing mental high, it may also lead to some people feeling dizzy. The best advice to novice users or anyone new to this strain is to take it easy the first few times.

So, we have noted how the use of this strain can cause headaches. But believe it or not, most medical cannabis users use Apollo 13 to deal with headaches. A strain that can cause headaches is also used to manage headaches… confusing? In other words, it works for some while it does the opposite for others.

Looking to buy seeds like Apollo 13? Check out our marijuana seed bank.

There are also other uses for Apollo 13 with regards to its medicinal values. For instance, it can help reduce the symptoms of mild pains and aches. In some instances, it can also help people deal with stress and depression. Because it gives energy to users, it can also be used to deal with fatigue.

Growing cannabis is such a delight for many. It does not matter what the season is, so as long as one has the proper equipment, it can be done right inside the house. Of course, like many others, it can also be grown outdoor. Because it needs less maintenance and attention, Apollo 13 may prove to be an easy strain to grow. As such, it makes for a wonderful starter for newbies in gardening.

We do not have complete information on growing, but from the little that we know of, it is not a tall plant. So, we can expect a short plant with thicker stems than usual. It does have beautiful dark green buds with sticky trichrome.

Download my free Grow Bible and grow your own Apollo 13!

It appears that Apollo 13 can also be harvested earlier than most Sativa-dominant strains. Of course, that would depend on the indoor garden set up. At any rate, the estimated yield per square meter could be between 12 to 16 ounces. It has a flowering time that falls between 7 to 8 weeks.

As mentioned, Apollo 13 needs less maintenance than normal which makes it an ideal strain for beginners. In a warm climate, the plant should be ready sometime in mid-September. Each plant could give 16 ounces or more.

What is the Apollo 13 strain yield?

How much THC does Apollo 13 have?

What are the origins of the Apollo 13 strain?

Have you ever smoked or grown your own Apollo 13? Please let me know what you think about this marijuana strain in the comments below.