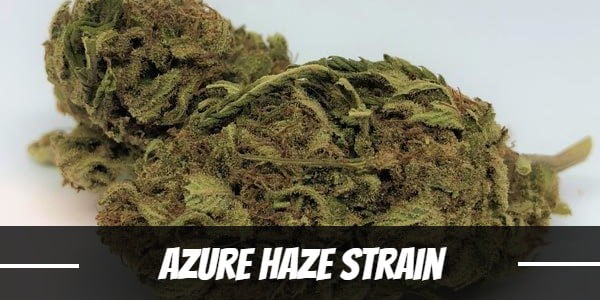 Azure Haze is a delicious strain with potent levels of THC, averaging between 18% to 24%. In moderation, it delivers a pleasant high that starts with an uplifting head high before it spreads throughout the body like a soothing buzz that envelops users in dreamy tranquility. Although it is largely Indica-leaning, its effects have a gentle stimulating quality that lasts for hours.

To create the strain, DJ Short used Blueberry as a genetic base. The former is a fruity Indica-leaning bud with a diverse parentage. It has a relaxing body high with a therapeutic effect. Later, it was crossed with Super Silver Haze for its long-lasting high and head-to-toe invigoration. Like the latter, it has a place among the mainstays of the industry.

Although it is almost similar to Blue Dream, the major difference lies in the generation of the former. Rather than an f5, the disc jock used an f4 which is closer to the original genetics of its parents. Although seemingly minor, this distinction led to the creation of Azure Haze.

A buzz of euphoria swarms the mind at the onset. It clears away doubts or distractions and replaces it with pleasant thoughts. For casual users, the mental clarity brings fresh perspectives and ideas to the table. Along with an upbeat disposition, one feels motivated to finish tasks with total focus.

Gradually, a light pressure trickles down from the temples. It surges through the muscles, untying knots and removing tension while blanketing users in deep relaxation. Despite its intensity, it does not lock users to the couch. Instead, it is a soothing buzz that is kept at bay by its initial cerebral onset.

Because of the strong influence of its Sativa genes, Azure Haze can be used any time during the day. It can also be used at night to relieve any of the accumulated stress at work.

Azure Haze has a tropical scent that tantalizes the nasal senses with a blend of blueberries, berries, and melons. Enhancing it is a tangy citrus with a refreshing note of evergreen especially when the buds are broken apart. Upon combustion, its sweet overtones fill the room.

In the palate, Azure Haze’s tropical flavors take center stage. It fills the mouth with a sweet but tangy blend of blueberry, berry, melon, and citrus. On the exhale, its smooth smoke leaves a refreshing aftertaste of evergreen.

Red eyes and a cottonmouth are two of the most reactions to smoking Azure Haze and any other strain for that matter. Although the effects are inevitable, it usually goes away on its own after a few hours. Still, if it persists, users may down a few glasses of water throughout the day as well as avoid caffeinated and alcoholic drinks.

A rare experience that comes with using Azure Haze is greening out, a condition which is characterized by temporary dizziness and a keen awareness that triggers anxiety. It is affected by one’s disposition before the high as well as the dosage. As such, users should pace consumption of the bud or avoid it altogether.

Stress relief is one of the top reasons that users consume cannabis. To this end, Azure Haze works well. It delivers a soothing euphoria that calms the mind while uplifting the mood. Similarly, it manages symptoms of depression, anxiety, and other mental health issues like PTSD.

In invigorating the mind, the same psychoactive compound also stimulates the appetite. Before doing so, however, it first relaxes the stomach to get rid of the distracting hunger pangs that keep one from enjoying a meal. For this reason, it is a great food companion to patients dealing with cachexia or eating disorders like anorexia.

Through a similar mechanism, Azure Haze invigorates and removes aches from all over the body. It blankets users in tranquility as it brings back one’s former limberness. At the same time, it kneads away the tension in the muscles.

Free from mental and physical burdens, users fall into a deep, unencumbered slumber as the relaxing effects persist. With its sedating properties, it enhances the quality and quantity of sleep.

Download my free Grow Bible and grow your own Azure Haze!

Azure Haze is among the easiest plants to grow. Although it grows tall and looks like a Sativa plant, it has a single cola with a sturdy structure that can withstand a variety of growing factors. As such, it is a great beginner’s strain that be cultivated in gardens or farms in the northern hemisphere.

with a sturdy structure that can withstand a variety of growing factors. As such, it is a great beginner’s strain that be cultivated in gardens or farms in the northern hemisphere.

Because it grows quite tall, it works best with the Screen of Green method. It brings up the lower nodes to create an even canopy. With better light distribution, it creates more budding sites that produce more buds. Pairing it with a hydroponics setup will hasten its long flowering period while significantly increasing yields. Using soil as a medium is also an option as it improves terpene profiles.

Azure Haze has an indoor flowering period of 9 to 10 weeks. At harvest, it yields between 10 to 12 ounces of buds per square meter. However, seasoned growers can expect a bigger turnout.

Outdoors, Azure Haze blossoms between the second to the last week of October. Growers can expect at least 12 ounces of buds per plant once it is fully mature.

What is the Azure Haze strain yield?

How much THC does Azure Haze have?

What are the origins of the Azure Haze strain?

Have you ever smoked or grown your own Azure Haze? Please let me know what you think about this marijuana strain in the comments below.