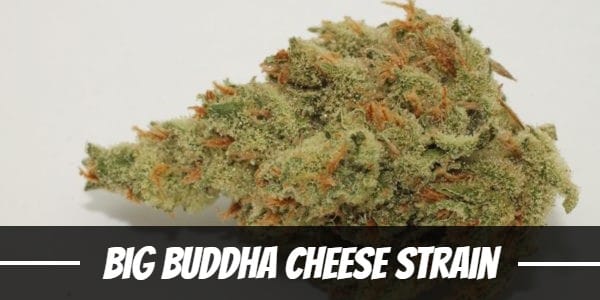 Big Buddha Cheese is arguably one of the most popular strains to have originated from the United Kingdom. Over the last decade, it has continued to not only thrive but also to gain a new following. Not a lot of people today realize that the most widely available from the family of cheese strains might not have existed were it not for a group of free-spirited people.

The strain first made its appearance on the scene as an unnamed clone-only plant. Because of its unique aroma and traits, it was passed on from one individual to another. It later became known as UK Cheese (or simply Cheese).

In 2004, a company called Big Buddha Seeds was able to obtain a clone of UK Cheese. In their endeavor to finally extend the cheese lineage with one that can produce seeds, they crossed it with an Afghani Indica plant. The resulting strain was then named after the breeder and called Big Buddha Cheese.

It retains much of the same aroma that made its predecessor a big hit among the consumers. Furthermore, it also is a milder version but still potent enough to deliver a satisfying mental and physical experience. Considered as one of the best daytime cannabis hybrids, it promotes the sense of wellness as well as influence users to be more sociable.

In more ways than one, Big Buddha Cheese is a better version of UK Cheese. Because it is available in seed form, it soon found its way all over the world. Among its most notable recognition is being named as the best Indica in the High Times Cannabis Cup 2006.

Big Buddha Cheese tilts more towards its Indica side. However, it does deliver a more pronounced Sativa effects. With regards to its potency, tests show its THC to be in the range of 13% to 18%. In other words, it is at worse still above-average in strength.

At its onset, it delivers an uplifting and energizing buzz that swings the mood of users. As happiness sets in, most people also have a tendency to focus better. Soon, this is followed by the constant flow of ideas but not to the point where random thoughts pop in and out without any sense at all. Feeling motivated, working on tasks become more efficient.

As the physical high also sets in, it blends very well with the mental high. Users start to feel a full-body relaxation. It is not the kind that causes a numbing sensation but more like a soothing calm.

One thing users have come to love about Big Buddha Cheese is that it does not produce extreme psychoactive effects like others. Hence, it is unlikely that anyone would experience racing to the top of the mountain only to come crashing down. Instead, the experience is more stable yet incredibly fulfilling.

Big Buddha Cheese has to be proud of its lineage. All over the world, there is only a few family of strains that have gained prominence. One of them is cheese lineage; the other is skunk lineage. On its fragrance, both these lineages are evident.

As one can surmise, it combines the odor of fresh earth with the sharp scent of cheese with a skunky note.

Some people love describing the cheesy smell of Big Buddha Cheese as stinky. In reality, it is not at all unpleasant. Perhaps some people may need a little time getting used to its exotic taste, but most will find that it is reminiscent of parmesan. Accompanying the creamy texture is a sweet note.

For many people, using Big Buddha Cheese results in experiencing dry mouth. Not that it is much of a concern, but it can be uncomfortable.

As mentioned, the strain may be a little bit milder than UK Cheese. Nonetheless, it remains potent. Due to the gentle nature of its hit, many also tend to use a little bit more than usual. Hence, it possibly may lead to a few more adverse effects.

People who overindulge may have a headache. It is also possible that some people may even have dry eyes.

The combined effects of Big Buddha Cheese can do wonders for medical cannabis users. Unfortunately, due to its low CBD, it cannot be used as a treatment for seizures and epilepsy. On the other hand, its mental and physical effects can bring comfort to patients.

Feeling uplifted and happy, it is only natural that the strain can do a splendid job of acting as a stress-reliever. In turn, this helps people fight off depression. Instead of focusing on the dark hold, they find light amidst the cerebral euphoria induced by Big Buddha Cheese.

The mild Indica effects can also be helpful as a pain reliever, but that is only for mild cases.

Download my free Grow Bible and grow your own Big Buddha Cheese!

Big Buddha Cheese is easy to cultivate. All that growers need to do is to follow the recommended guidelines in growing plants. They also have a choice of whether to plant it indoor or outdoor.

Big Buddha Cheese can grow well using soil as a medium. But hydroponics is a better choice as it allows for explosive growth. Between 7 to 9 weeks, it should be ready for flowering. Growers can expect a harvest of 16 ounces of buds per square meter.

This cannabis hybrid loves plenty of sunshine. Out in the open, it will need a little more space compared to many other strains as its leaves tend to stretch out. By the end of October, it should already have entered the flowering stage. Growers can expect to harvest at least 16 ounces of buds per plant.

What is the Big Buddha Cheese strain yield?

How much THC does Big Buddha Cheese have?

What are the origins of the Big Buddha Cheese strain?

Have you ever smoked or grown your own Big Buddha Cheese? Please let me know what you think about this marijuana strain in the comments below.