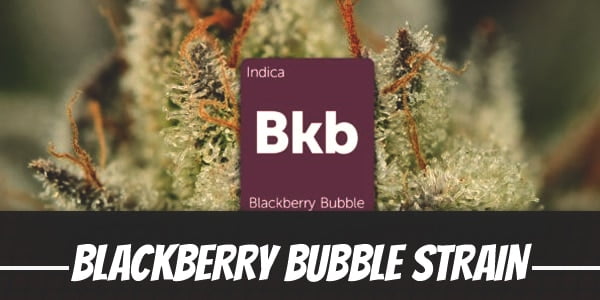 A lot of people take for granted that growing cannabis is not the same as crops. Homegrown for personal use is one thing. But when it is for sale, then there is the added responsibility of delivering the highest quality. It is not only the traits and potency but also making sure it is free from contaminations. Such is the promise of Arizona Natural Selections, the company behind Blackberry Bubble.

Before continuing, here’s a little peek at the parent strains.

Sour Bubble has been around for a while now, and it is quite popular in the medical cannabis user community. Among its most notable traits include pain relief and mood-altering properties.

Blackberry Kush, on the other hand, is a descendant of the legendary Afghani Indica and Blackberry. Like Sour Bubble, this strain is also notable for pain relief.

From both of these parent strains, notice the similarities? Both are not only preferred by recreational users, but the medical benefits they provide also makes them invaluable to medical users. As such, the intent behind creating Blackberry Bubble is clear from the beginning. The company wanted a hybrid that people who are suffering from pains and aches can use.

To do that, they employ state-of-the-art facility in breeding and growing cannabis. At the same time, they also have their proprietary techniques. With that being said, it also means that we do not know much about its cultivation. At the same time, it is unlikely for anyone to obtain a clone of this plant.

Blackberry Bubble is one mean creeper. Before we get into more details, one thing that potential users must know beforehand is that it packs a punch. Having a THC level of up to 20%, that is already a clue to the level of intensity it can deliver. Because it is a creeper, unsuspecting people may think otherwise and end up using more than enough.

In most instances, soon after smoking this strain, its effects are not evident. Instead of a surge that one might come to expect after seeing its THC level, what happens is a gentle euphoric rush that alters the mood. Pretty soon, most people start feeling a sense of happiness and elation. However, some may also have a slight haziness hanging over their head.

At the same time, as the effects move down to the body, users feel their muscles relaxing. Before one realizes it, the full effects of Blackberry Bubble kick in and overwhelm the body. Left in an utter state of relaxation, the users are unlikely to move. For this reason, the strain should only be used at home when it is time to call it a day. Before its effects completely wane, it is likely that users have already fallen asleep.

For medical purposes, the sedative properties should prove to be helpful among people with chronic illnesses.

As soon as one gets close enough, a sweet buttery and bubblegum flavor fills the nose and the senses. It has such a delightful aroma that seems to call one out to hold and use it.

To make it more pleasant for use, the delightful aroma of Blackberry Bubble is evident in its taste. Add to it the earthy freshness and a note of berry and what we have is one of the better tasting strains worldwide.

After reading about all the great things about Blackberry Bubble, here come the not-so-great side effects of using this weed.

Like any strains, the use of cannabis comes with adverse reactions. Expect to experience a certain degree of dry eyes and mouth. There is no other way around this except to stay hydrated.

Another thing that may be a concern is that it can also increase the level of anxiousness. Although mild, if it does occur, perhaps people dealing with anxiety issues should avoid this strain.

Now, for the good news.

There are no other reported adverse reactions other than the ones mentioned above. One thing that users, especially beginners, should keep in mind is that whenever using something they have never tried before, use only a small amount. In the case of strains that possess a high THC content, simply using to the limit is already enough for some unwanted effects to manifest.

As alluded to earlier, the company designed Blackberry Bubble, especially for medicinal use. Among its most popular applications is in helping people deal with pains and aches. It also includes those who are terminally ill. These people who have to suffer at all hours are likely to find relief even if only for a few hours with the use of this strain.

Looking to buy seeds like Blackberry Bubble? Check out our marijuana seed bank.

Besides pain relief, the sedative effects of this strain will cause people to fall asleep. Patients, in this case, can use a little more of that as that aids in recovery. Even the insomniacs may consider the Blackberry Bubble their best friend when it is time to prepare for sleep.

Download my free Grow Bible and grow your own Blackberry Bubble!

Arizona Natural Selections has not released any information at all regarding the cultivation of Blackberry Bubble. In fact, it is not even available in seed form. Hence, about the only thing we can say is that it is likely a plant that grows well in an outdoor or indoor environment like its parent strains.

Our best guess is that this particular cannabis plant likely is ready for flowering between 7 to 9 weeks. As for its potential yield, a good start is in the range of 10 to 12 ounces per square meter.

If this plant is grown outdoor, we think it will not grow more than 6 feet like most Indica type plants. Most likely, it enters bloom stage at the start of October, and each plant will yield at least 12 ounces of buds.

What is the Blackberry Bubble strain yield?

How much THC does Blackberry Bubble have?

What are the origins of the Blackberry Bubble strain?

Have you ever smoked or grown your own Blackberry Bubble? Please let me know what you think about this marijuana strain in the comments below.