Bootlegger is an outstanding Sativa-leaning strain from. Colorado Seed Inc. It has an invigorating head to toe high that begins almost immediately after the first few tokes. It inspires an innate sense of happiness while also thoroughly relaxing the body.

In creating the strain, Colorado Seed Inc. incorporated AK-47. The potent plant, named after a powerful machine, is a literal one-hit wonder. It takes at least a single puff of its combusted buds for users to experience its heavy-hitting high. Afterward, the breeders used their own Gupta Kush – an Indica-leaning strain named after medical marijuana advocate Dr. Sanjay Gupta. It embodies all its namesake stood for – a therapeutic high that crushes stress, uplifts the moods, and reduces pains.

Bootlegger has effects that strike as fast as lightning. Not only because it is a Sativa-leaning strain, but also because of its potent THC levels. Its psychoactive compounds average between 17% to 22%, a range higher than most strains.

The onset introduces itself as a rush of euphoria that envelops the mind. A behavioral change is recognizable within minutes after the first toke. Users seem brighter as smiles are sketched on to the face. The uplifting head high also leaves one feeling upbeat and happy on the inside.

A tingling sensation kneads the muscles free of tension. It starts at the temples before ebbing down slowly to the rest of the body. Its immediate effect is a limber body that moves fluidly like a well-oiled machine. Users may take on new tasks or light physical activities without worrying about potential downtime.

Some users, however, may feel liberated from the reduced mental and physical inhibition. It arouses the carnal senses, priming one for a fun-filled night. Because of this, Bootlegger is best used with a partner or a loved one on a lazy day off.

Bootlegger has an enticing earthy aroma with a hint of berries. It is pungent, due to its high levels of THC. It has a sweet smoke especially after breaking apart the buds and combusting it.

Bootlegger tastes like a tropical shake. It has overtones of berries that entice the palate with a blend of sweet but tangy fruit. On the exhale, however, it leaves an aftertaste of earth and musk.

Red eyes and a cottonmouth are two common reactions to smoking cannabis. Its cannabinoids interfere with moisture production, resulting in a dry spell. Seasoned users often ignore it due to mildness, but beginners may down a few glasses of water throughout the day. A rarer side effect is feeling slightly paranoid and disoriented. Pacing and moderation, however, will keep it at bay.

Stress relief is among Bootlegger’s best uses. It has a quick-acting head high that instantly uplifts the mood. Meanwhile, its calming euphoria appeases the overwhelming dread that users feel when slumped with multiple deadlines.

Long-sufferers of depression and other mental health issues like anxiety or PTSD may also turn to the strain as a reprieve. In inducing its mood-enhancing high, it also temporarily pushes back negative thoughts. At the same time, it improves one’s sense of happiness.

High levels of THC bring out the psychoactive compound’s natural analgesic properties. Thus, it should come as no surprise that users feel various types of aches and pains disappear. Its tranquilizing buzz also improves fatigue, starting at the temples before it envelops the body.

Similarly, it also soothes gastrointestinal problems that prevent food from travelling smoothly to the stomach. It keeps it from regurgitating, so users need not vomit. Because of this, it is a source of comfort for cancer patients suffering from the nauseating effects of chemotherapy.

Bootlegger exhibits typical Indica traits in spite of its Sativa genes. It barely stretches toward the light and remains quite short. Its buds, although tapering on each end, are densely packed instead of fluffy. Its weight is noticeable when placed in the palm of one’s hand. Not to mention, it has a thick coat of trichomes that leave a sticky film on the surfaces it comes in contact.

Its sturdy frame allows growers to cultivate it in farms and gardens where it flourishes under the warmth of the sun. It will need to be planted strategically so it receives ample sunlight while providing enough space between each plant for the breeze to dry off any excess moisture. During extreme weather, such as snows which can kill Bootlegger overnight, a temporary enclosing must be installed.

Growers may also move the plant indoors, where it is easier to adjust factors like temperature, lighting, and temperature. For instance, during the flowering period, growers may switch to higher intensity HPS lights that double bud production. Installing fans and situating the air it produces toward the top will keep it from burning off.

It works best with the Sea of Green method. The setup requires placing at least four plants in a single square meter to maximize space, enhance yields, and hasten the flowering period. However, pruning is essential as Bootlegger’s foliage tends to expand or grow sideways. If left unattended, it may inhibit light and air circulation in the lower nodes – resulting in stunted or slow growth.

TIP: Looking to buy seeds like Bootlegger? Check out our seed bank

Indoor
It takes Bootlegger 8 to 10 weeks of flowering to fully mature. Once ready for harvest, growers can expect between 12 to 16 ounces of buds per square meter.

Outdoor
Bootlegger blossoms between the middle of October up to the last few days of the same month. It yields at least 16 ounces of buds per plant at harvest.

Have you ever smoked or grown your own Bootlegger? Please let me know what you think about this marijuana strain in the comments below. 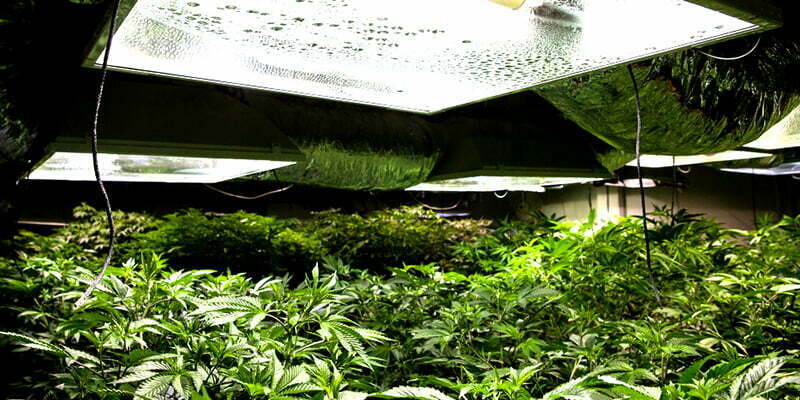