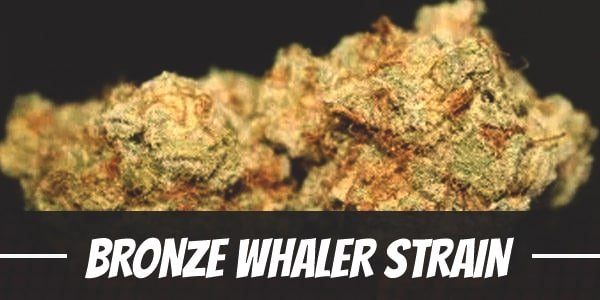 Bronze Whaler is named after a whaler shark that is often spotted in the southern coast of Australia. Like it, the bud has flashes of bronze as a result of its leaves changing color and the pistils turning into a shade of copper. Not to mention, it has a glowing sheen to it too as a result of light bouncing off of its sparkling trichomes in the same way that the ocean catches the sun’s illumination.

While its name is a world wonder, the bud’s appeal is what catches the attention of cannabis users the most. It delivers a soothing head-to-toe high that calms the dread from many of life’s stressors albeit temporarily. Meanwhile, its tranquilizing buzz reduces fatigue so one genuinely feels like relaxing by the beach.

In creating the strain, Australian breeders MJOZ used a fortified F3 Bronze Whaler which has been selected after a long process of phenotype hunting. It was later crossed with Skunk #1 to accentuate its cerebral high while further strengthening its performance in the grow room. The turnout was great too as Bronze Whaler was awarded the Sydney Cannabis Cup in 2002.

Typical of Indica-dominant strains, Bronze Whaler is a slow-starter. Its effects usually manifests 15 minutes after the first two to three puffs. Its high, however, is long-lasting with users reveling for 3 to 4 hours in tranquility. Still, one should be careful about overusing the strain. When used beyond tolerance, it can be an intense possibly overwhelming experience.

With that said, the initial onset is largely cerebral. A rush of euphoria clears the mind and boosts moods. It leaves users feeling cheery from within especially as happy memories play like a montage. Like a gentle breeze, it rocks one into a state of serene calmness before the start of the physical buzz.

Although gentle, the mental stimulation does use up some energy. And so, it should come as no surprise that while in the middle of the uplifting head high users sudden feel hungry. To save time from having to go to the kitchen and prepare food, It might be best to have some snacks prepared ahead of time as the Indica effects can be quite powerful.

Gradually, after about an hour or two, a tingling sensation begins to trickle down to the rest of the body. It soothes each muscle in its wake until users are deeply relaxed. Blanketing users is also a warm, fuzzy feeling that inspires fully complements the initial head high.

Due of its heavy-hitting effects, Bronze Whaler is well suited to evening use after a long day or week of work. This is because the immensely soporific high can eventually lead to drowsiness or laziness. Thus, using it during the day when one has to be alert can be counterproductive.

Bronze Whaler has an enticing and pungent tropical scent with strong fruity overtones. In fact, a whiff is enough to remind one of a previous vacation by the beach. Broken apart or combusted, the sweetness is later balanced out by the comforting aroma of wet soil.

Drawn in, Bronze Whaler’s smoke hints at its South Pacific origin. It is fruity with a tropical flavor that entices the palate with a tinge of honey as it swirls down to the lungs. On the exhale, it leaves a sweet earthy aftertaste that lingers for hours after the last puff.

Regardless of the strain, cannabis will always interfere with the body’s ability to produce moisture. Hence, it should come as no surprise that users experience a cottonmouth and dry eyes even with Bronze Whaler. It usually goes away on its own but one may manage it by staying hydrated throughout the day. Avoiding coffee and alcohol will also keep the dry spell from worsening.

Although rare, it is also possible to green out while using Bronze Whaler. Apart from overconsumption, one’s own tolerance to THC may also play a major factor with regard to the interplay of effects. Hence, users should start with low dosages before gradually building it up.

Presumably, Bronze Whaler was created for recreational enthusiasts. Still, it remains a prolific source of comfort to patients from the medical marijuana. Its cannabinoids’ ability to ease symptoms from a wide array of afflictions give it significant therapeutic value.

Its happy high, for example, uplifts the mood. In doing so, it plants an innate sense of happiness that reduces stress effectively. At the same time, the upbeat disposition also helps manage symptoms of depression, anxiety, and PTSD.

One of the best times to use Bronze Whaler is right before a meal. It encourages a hearty appetite that, before anything else, first soothes the stomach of any turbulence that can lead to vomiting. For this reason, it is a great aid to users with cachexia or eating disorders like anorexia that avert from food. Similarly, cancer patients suffering from the nauseating effects of chemotherapy also find repose in its relaxing buzz.

At such high concentrations, the same psychoactive compound also reduces aches and pains from all over the body.

MJOZ are Australian breeders with over 50 years of experience in the field of growing cannabis. Hence, it should come as no surprise that Bronze Whaler is a wonderful performer in the grow room.

It may need to be topped early though. Unlike most Indica-leaning strains, it can grow up to 8 feet. In all likelihood, it will cramp up a grow room and inhibit the circulation of light as well as air in the lower nodes. Thus, trimming away broad fan leaves and height management is necessary. Removing away dead parts will also improve nutrient distribution among healthier nodes.

Bronze Whaler is best grown using the Sea of Green technique, wherein growers place at least four plants close together. In this way, it will flower faster while producing more budding sites at the same time. This is especially true when it is grown using a hydroponic setup.

As it matures, Bronze Whalers turns into a soft brown that lies between a shade of bronze. Its leaves grow angular but taper with serrated edges that are reminiscent of a shark’s fin. Meanwhile, its buds sport the same copper hue with a tinge of yellow.

Bronze Whaler flowers quicker than most strains. Growers will see flowers begin to bloom within 6 to 8 weeks. And, once mature, it will produce at 10 to 12 ounces of buds per square meter.

In the northern hemisphere, Bronze Whaler blooms between the middle of September to the early days of October. Growers can expect the vigorous producer to yield at least 12 ounces of buds per plant.

Have you ever smoked or grown your own Bronze Whaler? Please let me know what you think about this marijuana strain in the comments below.