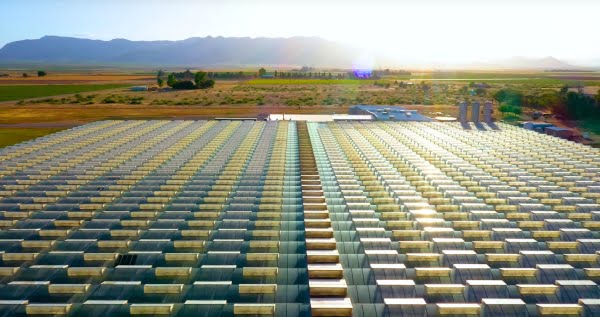 In the season finale of Cannacribs, Nate and the crew visit the Pharm and Sunday Goods, a 322K square foot growhouse, in Wilcox, AZ. Nate talks with Sjoerd Broeks (pronounced Shored Brooks) director of plant science and genetics at the Pharm. Sjoerd is not new to cannabis. According to him, cannabis has always been part of the fabric of his life and “remains so to this day.”

Broeks is Dutch but moved to England for 16 years. He returned to Amsterdam, where he worked as a gardener at the Cannabis College. That was his first job in the cannabis industry.

Nate then begins his tour of The Pharm where Broeks talks about their strains. He explains that they source all of their genetics from the best breeders. They start by growing many plants from one strain, after which Broeks, along with the help of their breeders, find the plants with the strongest genetics to further ensure top quality.

Broeks’ ultimate goal at The Pharm is to conduct research on the different cannabinoids, something which he believes the facility is close to accomplishing. A lot of the old cannabinoids have been sort of “lost,”he explains. They’ve been bred out over the past 30 years. Broeks hopes that they will be able to “tease out” these cannabinoids from older genetics, thereby restoring them for a new generation of smokers.

At Sunday Goods, you can expect to find not only the newer, more popular and well-known strains, but also the older strains that you can’t find at most dispensaries. If you’ve been wanting to try some of the classics, such as Afghani, Sunday Goods is probably the place for you.

The Pharm is a gigantic operation that includes a large number of personnel working with 25 thousand seeds at a time. Sjoerd takes us to speak to Jacob Ray, Cultivation Administrative Manager at The Pharm. According to Jacob, the facility currently houses 24 thousand clones and 500 mothers, after which they select about 50 clones from each mother.

For their rooting simulator, he prefers to use Clonex, which acts as a root system, both by sealing the cut tissue around the stem of the cut clone and then supplying the needed hormones to help stimulate root cell development. Jacob also uses Elite 91 Myco Jordan, a highly concentrated and 100 percent organic inoculant containing the fungi mycorrhizal, which is used to improve the clone’s growth and development, as well as overall health.

To start his clones, his team presoaks the plugs in the Elite 91 solution at the same dilution they plan to use later to water the clones.  This eliminates the need to use a bevy of different products, which could end up compromising the health and integrity of the plant. To help seal in water, they prefer to use Clone Guard, which helps prevent their clones from contracting pests or maladies like powdery mildew, as well as reduce overall stress.

After 2-3 weeks, it’s time to move the clones into the Veg, where the clones live in separate areas depending on their age (6 weeks, 12 weeks, etc). In the Veg, we meet Enrique Ramirez, the cultivation manager at the farm. Enrique is an 18-year veteran of the commercial agricultural industry, making him very high (no pun intended) in demand, and a perfect addition to The Pharm.

The Veg uses draining tubs from FormFlex, which capture runoff from watering, allowing it to be reused. This is a vitally important advancement in cannabis cultivation because it saves on water usage. As anyone who has grown indoor cannabis knows, you’ll need a great deal of water and electricity to do it right. Enrique explains that this process saves them from 25-30 percent in costs.

If that weren’t enough of a benefit, the FormFlex drains greatly reduce the number of pests the plants might attract, by reducing the amount of standing water sitting around the Veg at any given time. To further help with water usage, Enrique and others in the Veg like to use Perlite as a soil amendment, because of its high water retention.

As far as their IPM (integrated pest management) goes, The Pharm prefers to use proactive pest control, such as introducing beneficial pests to take care of the harmful ones. When they do need to spray, they use Trifecta, an organic and nontoxic pest control spray.

It so happens that the day Nate and the crew visit the Pharm, Trifecta owner John Mussare happens to be on the premises as well, advising their team on how to utilize Trifecta best. As it turns out, this type of crop control is most useful when applied during the vegetative stage. If you are growing outdoors, in a less controlled environment, products like Trifecta can be used up to 2 weeks before harvest. This ensures that any leftover chemicals are completely gone before harvest.

Trifecta is great for big operations like the Pharm, but pricy for the everyday grower. If your plants need a little help with pest control, try Bergman’s Plant Protector.

Are you ready to see some real magic? It’s time to enter the Flower Garden, which is where we meet the Director of Agricultural Operations, Tony Stevens. Conditions over at The Pharm are unique because of the facility’s location: the middle of the Arizona desert. Those who are not familiar with a desert climate are probably not aware that monsoons are fairly common during the summer and fall months. As such, people like Tony have to make sure that they are prepared to deal with both a high temperature and a high humidity climate.

The facility is conveniently placed in Willcox, which has a much higher elevation than that of Phoenix. The Pharm utilizes a padded fan-cooled greenhouse, to manage the extreme temperature changes of the Arizona desert climate. It includes a padded wet wall, next to rows of fans that are used to blow moisture across the greenhouse. Two large fans sit in the middle of the greenhouse to keep the plants from collecting too much moisture.

As far as IPM management goes, you can expect things to be a lot different from the vegetative stage. A dedicated crew personally identifies each problematic plant. From there, a special team of IPM specialists to take care of the problem. For IPM management in early flowering stages, they like to use beneficial fungicides, such as Regalia, a product of Marrone Bio, whose products are known for not leaving a residual smell or residue or changing the terpene profile.

“We’re here to produce a quality flower,” Tony says. You can tell they mean it. All of the flowers in The Pharm’s beautiful Flower Garden look healthy and gorgeous.

Now it’s time to trim! This is where we meet Cliff Davis, the general manager “of everything” as Nate so succinctly puts it. Here we see the trimming room, where we meet the staff of 50 devoted trimmers dedicated to bringing Sunday Goods to life. This adds up to about a quarter of their staff. Most of the flower harvested there is hand-trimmed. For this the trimmers use HarvestMore trim bins, which are ergonomically designed to maximize comfort and ease fatigue, a common problem in trimming.

The Pharm also uses machinated trimming, specifically the Centurion Pro Gladiator model, which acts as both wet and dry trimmer. It is a huge time saver for larger operations if they cannot afford to hire additional staff. If you can afford it, you should hire trimmers, for that extra artisanal touch.

At last, it is time to meet the Curemaster OG himself: Charles Crum. Curemaster OG oversees the packaging of the various products Sunday Goods has to offer. To accommodate all of the curing time for the different strains, Curemaster OG categorizes them. He separates those that need the least amount of curing time from those who need more moisture, as well as those that need less time and moisture. Amazingly, he can keep track of most of it in his head, though he does have the help of technology!

Strains are kept in a very strict climate-controlled room consisting of different HVACS. This allows them to control the climate of each strain being cured, maximizing on both time and space. What makes Crum the Curemaster OG? It’s because he knows what consumers are after. “They want that cheese; they want that fire,” he says, knowingly with a wink.

More dank strains have to be “burped” a lot more, he explains. This means air must be released from the curing container more often to be replaced with fresh air. This is one of his secrets for preserving the skunky aroma that consumers love.

TIP: If you’re looking for quality flowers like The Pharm and Sunday Goods you can browse seeds at our seed bank

Lastly, it’s time to become acquainted with Sunday Goods, a highly regarded cannabis brand whose products do not only include things like flower, prerolls, concentrates, and cartridges. Sunday Goods also offers its own line of top-shelf edibles in both the sweet and salty varieties. They also create topicals, like bath bombs (both CBD and THC) and even an intimacy spray (ooh la la).

That concludes our tour of The Pharm, one of the top cannabis production and research companies in the US. Be sure to join us for season 2 of Cannacribs!