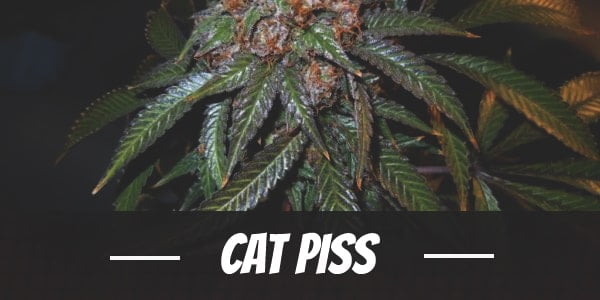 How would you like something that uplifts your mood with a mellow cerebral high that makes you feel positive and happy? Even better, it also gives you a mild body relaxation that does not leave you lethargic and lazy?

Ummm, there’s only one thing.

This strain has a disgusting name, and to make it worse than it appears to be, its name is justified. In other words, it has a pungent stench of ammonia.

Now, before you dismiss Cat Piss, you should know that it does not taste all that bad at all. The truth is that the fragrance of the strain itself is acquired. You might be repelled at the beginning, but in time, you sort of just get used to the aroma, and then you realize how good this Sativa-dominant strain is, after all.

Originally, Cat Piss is a phenotype of Super Silver Haze. Since it came out into the market, another strain was bred, which some people think might be a cross between the original strain and Trainwreck.

As you are now aware of, Cat Piss got its name from how funky it smelled.

Why do people drink coffee first thing in the morning?

So, coffee, which contains caffeine, jolts the brain to full functionality by removing the cobwebs that cloud most people upon waking up. Think of Cat Piss, acting like coffee, but more of the espresso kind, the kind that jumpstarts your energy level early in the day.

It’s not a strain that kicks in hard, instead, what Cat Piss does is to gradually take you on a head high that may be buzzing at times, but you still remain alert and focused. And then it continues to uplift your mood bringing you to new heights in elation and creative thinking. The result is a more jubilant you who would probably laugh at the corniest jokes.

It does have a small amount of Indica properties in that it could also give you a body high, faint, but noticeable. In general, you are left feeling upbeat and positive.

You know what you could do with Cat Piss? Use it and tell your friends about it because you have earned bragging rights. Next, dare them to try it too. Seems like a good party strain, huh?

A pungent stench of ammonia, who wants to smell that? About the only reasons why you would smell is because you have to pee in a stinky comfort room or you pass out, and someone used ammonia to wake you up. But the truth is that it is not as bad as it is made out to be. Sure, there is the smell of ammonia, but in reality, it is more skunky and peppery smell that makes it unique. Again, once you get used to the smell or learn to ignore it, you will soon find out why Cat Piss has a following.

Okay, we are done with the worse part of Cat Piss. How does it taste then? Believe it or not, it does have a pleasant taste. It is hard to describe, but it is something like funky and sour, but also has a sweet and peppery taste with a hint of pine. The weird funky taste does linger but it won’t be long before you are used to it.

Dry mouth, dry eyes, and dizziness, these are some reactions you might expect, which is normal for all cannabis, regardless of their taste. About the only concern is that smoking too much might lead to feeling anxious and paranoid. This is typical of Sativa-dominant strains and might happen due to overindulgence.

One reason why Cat Piss remains in the market is its medical benefits. It is quite good at managing stress levels and other mental health issues such as anxieties, depression, and PTSD. Be mindful though, depending on how well you tolerate Sativa-dominant cannabis, this strain may provoke more anxiety.

Other uses of Cat Piss are in managing minor pains and aches. It is also used as an anti-inflammatory, as well as providing relief from vomiting or nausea. As horrible as the smell might be to some, Cat Piss could also promote better appetite.

Cat Piss is easy enough to grow for those with experience and it thrives well both indoor and outdoor. It does require some work, which means you would be topping, trimming and pruning throughout its growth. But after 7 or 8 weeks, you start to see shiny trichome covered green buds with orange hairs. By then, all your hard work would have paid off.

To date, not much info has been given on the specifics of growing Cat Piss indoor and outdoor. But we know enough to estimate the yield size to be in the range of 12 to 16 ounces per square meter. Cat Piss should grow well in a good indoor garden set up.

Cat Piss grows tall outdoor. You may have to be vigilant of pests and other diseases that might try to ‘piss’ you off by affecting your plant. At any rate, by the end of September, you should be prepared to harvest an expected yield of 20 ounces or more per plant.

Have you ever smoked or grown your own Cat Piss? Please let me know what you think about this marijuana strain in the comments below.