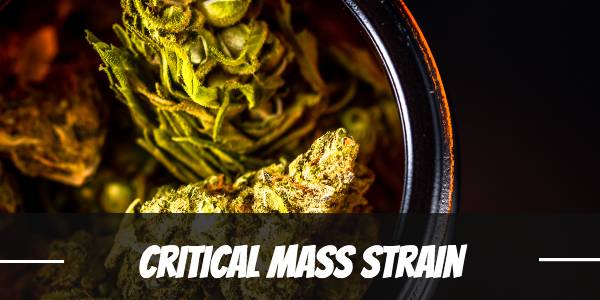 Critical Mass is wildly popular in the medical field for its notable CBD content, that is known to help many pain-related medical conditions. This plant is as smooth as they come, truly defining what it means to be strong indica, and earning its fan base by being consistently easy to cultivate, and offering a generous yield to boot.

This strain is a legend in its own right and is a profitable and generous strain even for novices to cultivate. Critical Mass produces buds that are capable of growing heavy to such a degree that they may be in danger of breaking branches from trying to hold up its impressive weight.

Critical Mass was created by crossing an Afghani indica with renowned heavyweight Skunk #1, thus creating a soothing bud with a potent knock-out punch. This hybrid is a new take on the famed Mr. Nice Seeds strain called Bug Bud, but has carved out a reputation for itself as a true-blue heavy-body indica dominant strain.

Critical Mass is a very reliable relaxant, and is therefore an easy choice to consider when you are in for a relaxed night in watching movies, by yourself or even with company. This strain is quite heavy on the body, so as long as you don’t have to operate heavy machinery, you should be in for a good ride.

Critical Mass is guaranteed to make you feel happy and in a light and floaty mood, and will make it easy for you to tuck away your worries and let them go for the day .

Critical Mass can also make you feel sleepy and if you continue to smoke it in large doses, don’t be surprised if it ends up putting you to sleep.

Critical Mass CBD has a strong body high that is said to last you for a few hours, keeping you in a giggly and euphoric mood for the rest of the night. This hybrid is especially pleasant for those who need a little mood-booster, as it is able to keep you in good spirits and will make you feel thoroughly uplifted.

Critical Mass has a very distinctly refreshing fragrance. This sweet bud can fill the room with its citrus-sugary aroma, making you feel invigorated and invited. It has a slightly skunky hint to it, mixed with the scent of sweet and freshly harvested honey.

This fragrant plant has a taste that does not disappoint. Critical Mass boasts of all the especially sweet flavors you can think of. It will leave a taste of skunky citrus on your tongue upon the inhale, and in the exhale will make you think of a sweet earthy smoke.

Critical Mass has only a few side effects, the most common ones being that you may at times feel slightly dehydrated, and it may leave you with a dry mouth and dry eyes. In some cases you may experience some mild dizziness along with the dehydration, but this does not usually persist.

This indica-dominant hybrid can also induce feelings of anxiety and sometimes even paranoia in some. Critical Mass is quite potent, and is heavy on the body, and so if you aren’t accustomed to its strength, this strain may overwhelm you and cause for you to feel slightly uncomfortable with its high.

Critical Mass is very popular in the medical cannabis community, because of its above average CBD levels. This means that this strain is a master at easing many pain-related discomforts, allowing the patient to go about their day without feeling weighed down by it.

Among the pain conditions it is widely used for, Critical Mass is especially useful for the treatment of joint pain, muscle spasms and migraines. It is also an effective way to treat inflammation, and has proven itself to offer much relief for long term sufferers, without the side effects of prescription medication.

Critical Mass has also been recommended to those who struggle with mood disorders. Chronic stress can be crippling, but this indica dominant hybrid can offer much help in this department, allowing the patient to relax and leave his worries behind. For this same reason, this strain should also be considered for those suffering from depression and insomnia.

Download my free Grow Bible and grow your own Critical Mass!

Critical Mass is a relatively easy strain to cultivate, even for beginner growers. It is generous in its yield, and is happy as long as she gets a lot of sun and warmth, and is shielded from humidity and rain. This plant yields highly and its buds can become heavy and weigh down its branches, so it may need some additional support in holding itself up.

This indica-dominant plant can take around 8 to 9 weeks to flower and be ready for a harvest when grown indoors. Critical Mass can be expected to produce an indoor yield of about 27 ounces per square meter of good and fresh bud.

Critical Mass grown outdoors needs a Mediterranean climate to thrive in, and can be expected to yield an average of about 21 ounces per plant. This strain is usually ready for a harvest around the middle of September.

Critical Mass’s great relaxant effects makes it quite appealing to people who want to chill and have a good time. If you’re looking for something that will make you feel happy and in a light and floaty mood, then Critical Mass is the strain for you!

What is the Critical Mass strain yield?

How much THC does Critical Mass have?

What are the origins of the Critical Mass strain?

Critical Mass was created from a cross between an Afghani indica and Skunk #1 strains.

Have you ever smoked or grown your own Critical Mass? Please let me know what you think about this marijuana strain in the comments below.

YOU CALL IT CRITICAL MASS.
I CALL IT GEEZER WEED.
IT IS WHAT OLD PEOPLE SHOULD SMOKE. I GREW TWO PLANTS THIS YEAR.
THEY YIELDED ABOUT 6 OUNCES ON ONE PLANT AND 5 ON THE OTHER.
I AM 67 SO OF COURSE I HAVE ARTHRITIS IN ABUNDANCE. I ONLY SMOKE AT NIGHT SO I DO NOT SEE A LOT OF RELIEF BUT I DO NOTICE THAT I CAN NOW WALK DOWN A SET OF STAIRS NOT JUST ONE STEP AT A TIME. THAT HAS NOT HAPPENED IN A LONG TIME.
IT TASTES WONDERFUL. AND I DO GIGGLE. VERY LITTLE IF ANY PARANOIA .
SEEDS POPPED IN A GLASS OF WATER IN 24 HOURS.
I HAVE ENOUGH TO GIVE AWAY AT CHRISTMAS.
ALAN