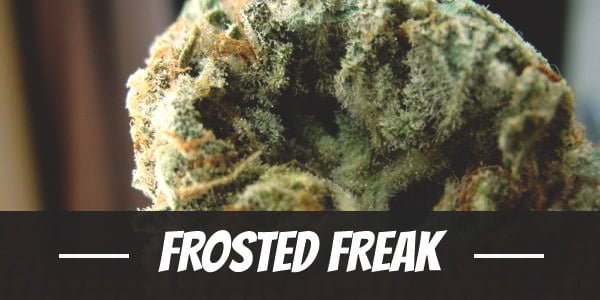 Frosted Freak has strong ties to Michigan. Apart from being a well-loved strain by its constituents, it was created and cultivated there by farmers dedicated to producing the best cannabis products. One of its parents is also a native of the area.

High Roller is a completely elusive clone-only family. Still, its crystallized buds and memorable psychedelic high gained a following among enthusiasts. Equally reputable in the marijuana industry is Brand X. No, not the product used by various companies for their commercials. On the contrary, it is another inheritance from Michigan that gained popularity for its heavy-hitting body buzz.

Resulting from the cross was a balanced hybrid with THC levels averaging at 21%. Although rare, its fast-acting, well-rounded effects entice users from all over the world.

The Sativa influence of Frosted Freak is evident in its quick onset. Right after the first puff, it delivers a mental buzz marked by a rush of euphoria that positively affects outlooks.

The behavioral change is almost immediate. Users radiate with a happiness that comes from within. It is not uncommon for one to feel like floating into a pure state of bliss either. Regardless, the cheery and upbeat disposition is a change of pace in an otherwise dreary day.

With time, a tingling sensation oozes from the temples. It trickles down in the rhythmic fashion of waves until it fully unties knots in the muscles and frees away tension. Rather than crippling users, it envelops the body in total relaxation to make moving easier.

Of course, being such a potent strain, the effects are totally different when one overconsumes Frosted Freak. Instead of experiencing a soothing full-bodied psychedelic high, users are locked to their couches.

Thanks to its balanced effects, Frosted Freak can be enjoyed any time of the day. While it is best used early in the evening, noontime and morning smoke sessions are also welcome.

Frosted Freak has a pungent citric scent akin to fresh oranges and lemons. Blending with it are subtle cooling undertones of mint that are accentuated by sweet vanilla. Broken apart or combusted, it releases a pungent floral aroma.

Carrying over to Frosted Freak’s flavor is its strong minty overtone. Its cooling effect is accentuated by the subtle tropical taste of freshly picked citrus mixed with flowers. On the exhale is the sweet yet creamy aftertaste of vanilla.

Most users experience dehydration while smoking Frosted Freak. Its effects are most notable in the eyes but, as cannabinoids begin to interfere with the production of saliva, a cottonmouth is possible too. As such, it is best to keep hydrated by downing a few glasses of water.

Despite its intimidating name, Frosted Freak comes with a variety of therapeutic benefits. It eases away a variety of afflictions that plague users, including mental and physical stress.

Constantly being bombarded by stress can be a debilitating condition that keeps users from fully living their lives. It can accelerate the onset of depression and exacerbate other conditions like anxiety or PTSD. The constant worrying even creates painful tensions in the body that can lead to over exhaustion or fatigue.

Frosted Freak relieves stress through its stimulating compounds. It induces a happy high that calms the mind by reducing overwhelming dread. The same mentally stimulating high helps stabilize emotions and enhance the mood. In this way, it manages mood disorders and mental illnesses.

Frosted Freak is a relatively easy strain to grow. It grows tall but its stalks are not at all thin. Aspiring growers, however, may need to shorten the vegetative period. Adding to its appeal is its sturdiness. It can withstand various problems caused by humidity such as mold, mildew, and bud rot. Moreover, its branches are sturdy enough to carry the weight of its heavy buds and even hold its own against strong gusts of wind.

At the moment, Frosted Freak’s original breeders have not made its seeds publicly available. Acquiring a clipping is still possible though especially when one makes the trip to Michigan. Moreover, cuts from a mature plant ensures aspiring growers of fine genetics. Plus, it shortens the growing process.

It takes an average of 8 to 9 weeks for Frosted Freak to flower. However, some growers may have to wait for a week more for the buds to mature. Nonetheless, it yields between 12 to 14 ounces worth of goods per square meter.

Have you ever smoked or grown your own Frosted Freak? Please let me know what you think about this marijuana strain in the comments below.