There are opportunities where creativity and resourcefulness beat financial capabilities. Irish32’s Northern Lights growing adventure is no different. With only some recycled materials to serve as the grow space, this rookie grower attempts to know everything there is with the chosen train.

In this grow journal, Irish32 chronicled all things learned from using a bucket as a grow house. With the help of some veteran growers, will this story have a happy ending?

A pure indica strain that mirrors the Northern Lights in the northern hemisphere entices smokers with its resinous buds. This strain actually gives off a pungent sweet and spicy scent and flavor. After the initial mental stimulation, the body is lulled into a calm state that allows the nerves and muscles to relax. Comfortable laziness follows before eventually drifting off to sleep.

Relying on pure Irish luck, Irish32 soaks one Northern Light Feminized with hopes of nurturing it until harvest. 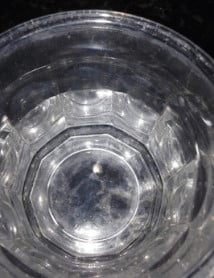 A stealthy grow journey relies on a space bucket with CFLs for survival. Especially one that does not intend to grow bigger than two feet. Those are part of Irish32’s main goal for this growing cycle: to see if he can harvest buds grown without the acknowledgment of anyone else and to learn the most about Northern lights as possible. 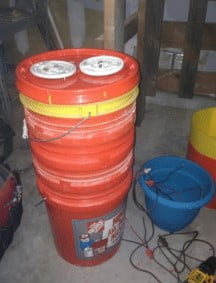 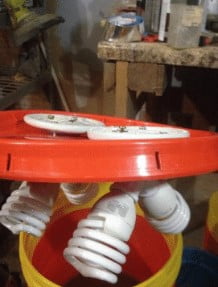 The lone Northern Lights seed successfully popped and is faring fine so far. It is in a red solo cup buried in Fox Farms Ocean Forest soil. While it grew the first set of leaves, the tip of the leaves turned brown. 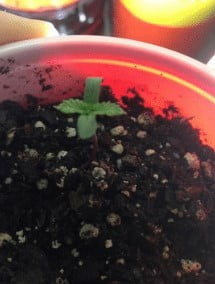 Possible culprits are the CFLs which bring in too much heat and raises the temperature to 85°F. Irish32 also made the mistake of leaving the lights on for 48 hours. Usmcjojo thinks this is a case of nutrients burns. Although, he is certain that it would also recover soon.
To start things off, Irish32 watered the plant using an eye dropper and being extra careful not to over water still.

After much encouragements from other growers, Irish32’s mind is finally at ease. Now, he plans to do the following for the Northern Lights:

1. Not to have the CFLs running for 24 hours. He is sure that the plant is not fond of it. 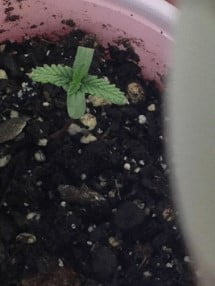 Irish32 suspects that Fox Farms Ocean Forest soil is also playing a part. He sees discoloration and slight burning at the tip of one of the leaves. Although Paranorman suggests that the discoloration at the middle of the leaf is a sign of new growth. 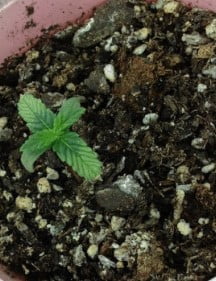 Paranorman knows exactly what he is talking about. As of today, new growths spurt out of the Northern Lights. At the same time, the discoloration that Irish32 pointed out is now a healthy shade of green. 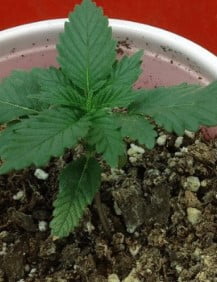 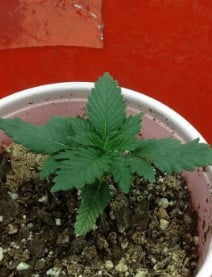 Now that everything sails smoothly, Irish32 readies himself to make some adjustments in the grow space. Starting with the CFL lights, he raised them up to 18” and maintains their light schedule at 18/6.
pH of the reverse osmosis (RO) water is 6.3 and balance at 6.1 before giving the plants.

Next comes the trimming of the bottom leaves to direct the energy on top, where it is supposed to be. 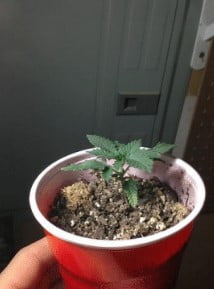 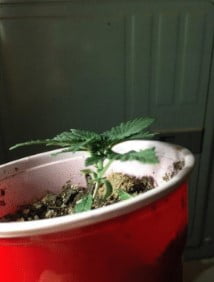 Last stop for the Northern Lights is transporting into the final destination: the growing bucket. 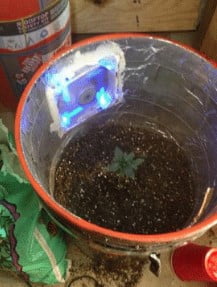 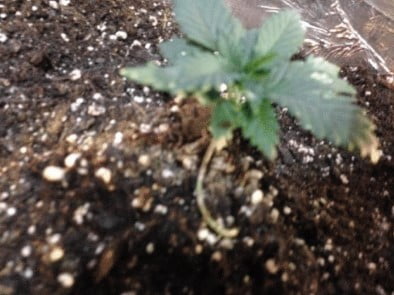 Made from a recycled plastic bucket, Irish32 duct taped the insides of the bucket to ensure there would be no light leak. Then, he cut a space on the side for a small fan.

Low-stress training (LST) means tying parts of the plants to keep the shape without pinching, trimming or intentionally hurting the plants. Irish32 used some pipe cleaners to bend the plants down to where they are supposed to and provide the shape that is apt for the Northern Lights. 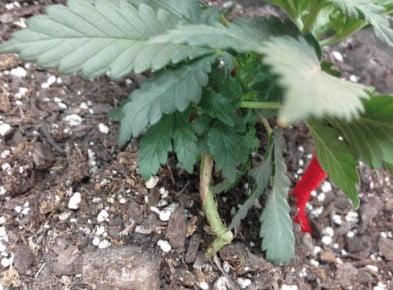 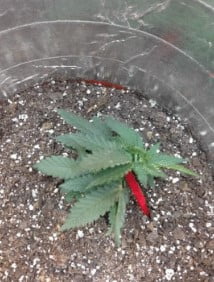 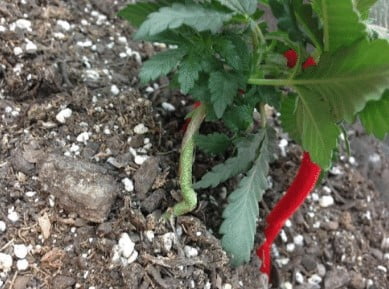 “From the photo, your plant is too small at this point for LST training,” fellow ILGM member Yoshi disagreed. “It has to grow out more to about 5-6 nodes before you can honestly learn what LST training serves.”

The impatient grower listened to Yoshi and removed the pipe cleaners for the meantime. Raising the lights also aided the plants to stretch and grow bigger overnight. 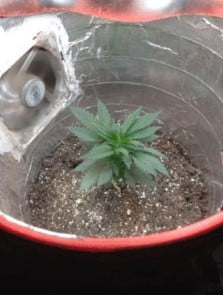 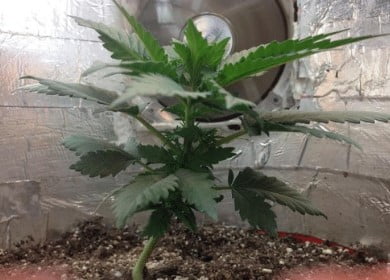 With the Northern lights jumping a couple of inches overnight, the water intake also increased from 16oz to 64oz in less than two days. 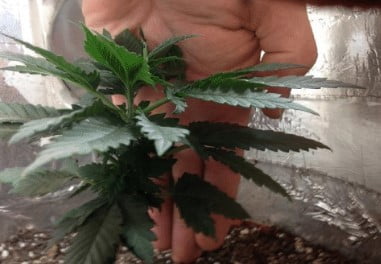 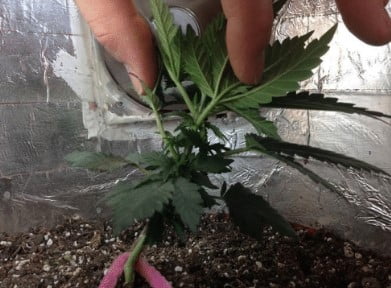 In an attempt to speed up the growth, or at least make it bushier, Irish32 fimmed the lady today.
However, Yoshi proposed getting more lights instead. The Northern Lights grower explains that he wanted to see what effect the CFLs that he currently has would have on the little one.

Ten days after fimming and the lady transformed into a bushy little plant. Watering consistently also helps as Irish32 now gives it 32 ounces every other day. By that time, some leaves are already droopy. However, it does not take them more than ten minutes to perk back up. 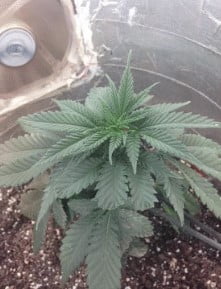 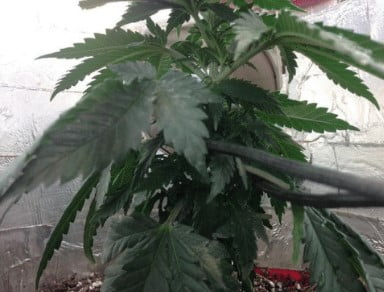 Over the last month, a lot of things happened for the Northern Lights: 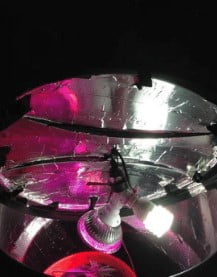 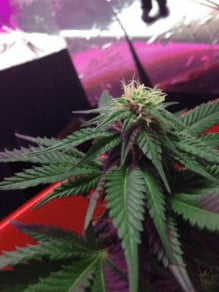 Irish32 also made a DIY Screen of Green (SCRoG) for the plant. By drilling some holes near the top of the bucket and inserting some strings, the net is now ready. 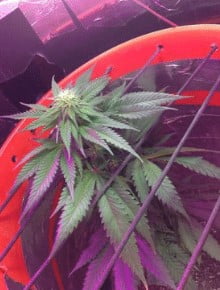 Buds are more apparent as of today. They are starting to form on the main cola and can easily be seen from afar. 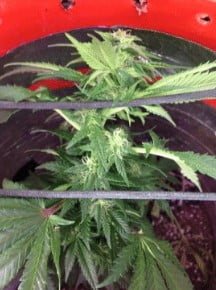 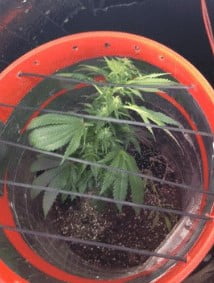 In almost a week, this lady would turn three months old. Still, no nutrients uptake because Irish32 wanted to see the difference of growing with nutrients and without it. As a matter of fact, nothing much changed aside from the lights and the decrease of water uptake to 32 ounces of 6.5 distilled water every three days. The soil is still the Fox Farm Ocean Forest Soil from the time of the first transplant.

Pistils on the buds turn amber over two weeks; a clear sign that the buds mature just fine. 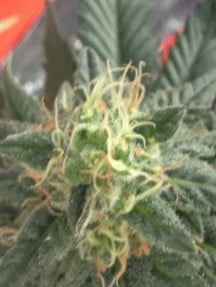 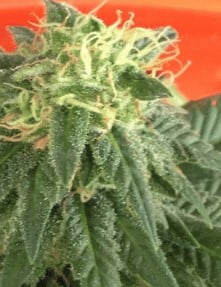 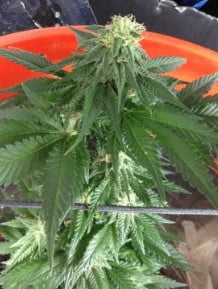 The Irish luck surely rubbed off on Irish32. While he was not able to show the end of the journey, it is safe to say he deserved what he got. Big, juicy buds filled the entire grow tent at the end of the grow. Still, the scene stealer is the grow bucket made of items easily found around the house.

Irish32 taught other members that: