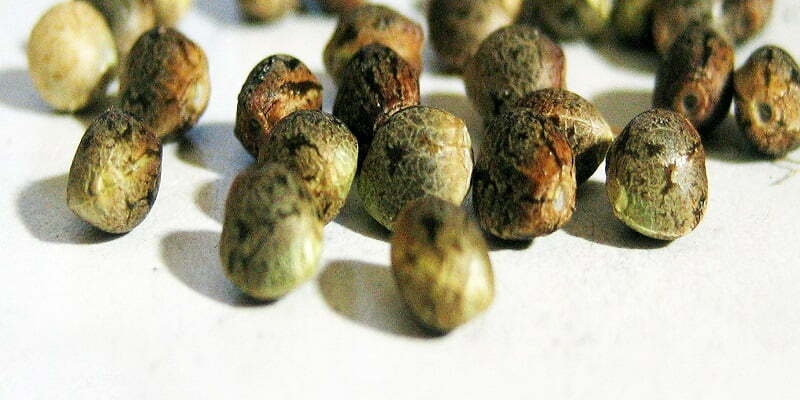 If you find an occasional seed here and there from a sinsemilla bud, then there is a good chance that it will have the genes for hermaphroditism (i.e. the same plant will have both male and female flowers). The problem arises from the relatively short time it takes for the male flowers’ pollen to pollinate the females. This slows down flower growth and increases seed production, making the plant unviable.

If hermaphroditism is not the case, then the flower may have been pollinated by stray pollen. You might know the mother’s pedigree, but the male could be a mystery. Regardless, both plants should be high quality because no one wants to grow a low quality plant.

Seeds from Mexican marijuana are generally not good for cultivation. The varieties grown south of the border tend to be of much lower quality with less THC and less potency than you’d find in domestic marijuana. Whether you grow a mediocre variety or a high-quality hybrid, you still use the same equipment, energy, and effort. If you’ve got the high-quality variety, your efforts are more robustly rewarded.

After you’ve sampled different varieties and have chosen the ones most medically effectual, it’s time to acquire the genetics. Instead of settling for a strain that doesn’t provide the medicinal qualities that you need, you should try to obtain the ones you need (or want).

There are basically two ways to start your garden: seeds or clones. Seeds have the advantage of being easily transportable and widely available through the Internet. Several service like rollitup.org, weedbay.net, and weedtracker.com rate each seed company and the reliability of their distributors. Seeing as how seeds aren’t legal in the U.S., most of the companies are located in Canada and Europe.

Seeds result from the gene combinations of two separate male and female flowers, so they won’t be exact genetic duplicates of the mother plant. Plants grown from them will not be as homogenous as a commercial pack of flower or vegetable seeds. During the growth period and then again after the harvest, gardeners will pick the best plants to continue by taking cuttings and rooting them. They keep only the clones of these selected plants.

As we have seen, cannabis is the only annual plant to be dioecious (i.e. having separate male and female plants). Only the female plants are actually productive, and the males must be eliminated. Although this is tedious, it needs to be done correctly to reduce the chance of producing undesirable seeded buds. Some breeders offer “feminized” seeds that induce female plants to produce pollen. This takes care of the tedious process of eliminating males.

Starting your garden with clones

Clones are rooted cuttings taken from selected female plants. They, of course, have the same genetic makeup as the plant from which they were taken. The advantage is twofold: first, you know the plant is female and, second, it starts you off post-germination to speed up the process.

If you’ve chosen your own variety of clones, that is likely the best option. Most professional cloners take their work very seriously and will only choose the best plants to continually upgrade their selections.

Although clones and cuttings aren’t usually available by mail order, you can still gain access to clones if you live in a state (like California) that permits patient cooperatives or if you already know someone growing a variety that you find useful.

Many seed companies ship from either Canada or Europe to the United States. While these transactions are illegal for both buyer and seller, they tend to be so small and discreet that they make it past most inspections. Several marijuana-related magazines like Cannabis Culture, High Times, and Skunk feature advertisements from seed companies. A limited number of patients’ co-ops and dispensaries in medical marijuana states supply domestically produced seeds.

Starting your garden with seeds

If you’re starting your garden with seeds, they should be germinated indoors for four to eight weeks before they are put outside. Be sure to start off with a high-quality, store-bought pasteurized planting mix in four-inch plastic containers. You could also try Oasis rooting cubes, Jiffy pellets, or rock wool cubes, all of which work satisfactorily. Place the seeds around 1/8 to 1/4 of an inch into the medium and keep the soil moist. Then, put those containers under bright compact fluorescent lights (CFL) with one 60-watt equivalency CFL per square foot. If the plants are going to be transferred outside, keep the light on about 18 hour per day. For inside-only plants, just leave the lights on continuously. The seeds germinate in about three to seven days. Once germination has started, maintain the soil’s current moistness and try not to water it down. Also, you should use houseplant fertilizer as recommended.

If you have not started with seeds that are manipulated to produce only females, then about half of the plants will be males. It’s important to discard these as soon as they are identified. It’s easier to determine sex before the plants are transplanted.

To speed up sex determination, wait until the clones have produced several branches. Remove a side branch from each plant and mark both cutting and plant so they can be matched. Place the cutting in moist planting mix, Oasis cubes, or a jar filled with one inch of water (replace the water every two or three days). Place the cutting in a moderately lit area and give them only eight hours of light daily on a regular basis. In 10 to 15 days all the cutting will grow either male or female flowers. Match the cuttings to the plants, identify the males, and discard them.

If you’re starting out with clones from a dispensary or grower, then you already know that all the plantlets are female and have likely been assured the utmost in quality. These can be transplanted as soon as they are well-rooted.