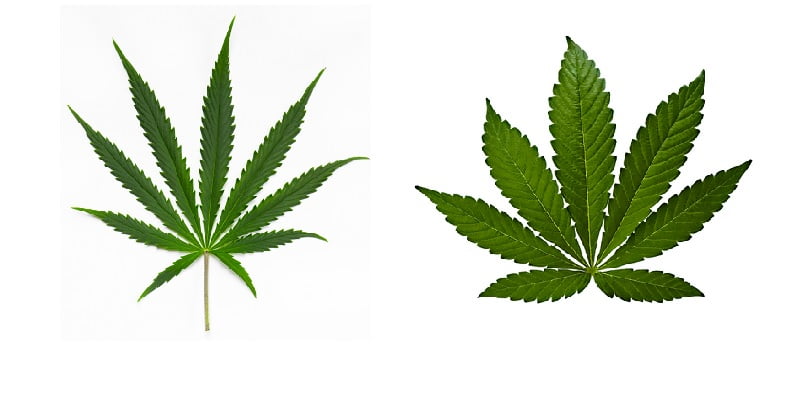 The Cannabis plant has three subspecies that influence its characteristics. Sativa,  Indica, Ruderalis, and hybrid strains each possess specific traits.

It’s no surprise that many wonder about Indica vs Sativa vs Hybrid when thinking about marijuana strains.

The Difference Between Indica, Sativa And Hybrid

Sativa and Indica first appeared around the 1700s, with hybrids appearing later. Sativas originated in temperate climates near the equator, while Indicas likely originated near the harsh Hindu Kush region in present-day Afghanistan.

These contrasting environments help explain why the protective coat of resin is thicker in Indica vs Sativa strains. Today attention has shifted from the origins of Indica and Sativa to the traits, determining the preference of marijuana growers.

Indica vs Sativa: Understanding the Basics

When comparing Sativa vs Indica marijuana strains, no scientific evidence illustrates the difference between the two or that a difference exists at all. Sativa produces notably higher THC and lower CBD, and Indica vice versa. Though plausibly responsible for differing effects, it’s only conclusive in landrace strains. A history of cross-hybridization shows interchangeable THC/CBD levels between strains. Regardless, the marijuana community vastly believes there is a difference.

Swedish botanist Carl Linnaeus classified the strain Cannabis Sativa was in the mid-1700s. Sativa literally means ‘things that are cultivated’ – a fitting description for this renowned plant.

Originating in western Eurasia, the cannabis plant eventually found its way to other regions of the world. For centuries, cultivators harvested Cannabis Sativa for its hemp fiber and seeds.

Closer to the end of the 1700s, French biologist Jean-Baptiste Lamarck discovered another species of Cannabis that was somewhat different from the Sativa.

He classified this species as Cannabis Indica, a reference to where he found the plant –  India. It also helped distinguish the new plant from the already established Cannabis Sativa.

The Cannabis plant is that it comes in many different types of weed plants. Know the three species of cannabis and the role of gender in growing marijuana.

According to Jean-Baptiste Lamarck, this species, much like its predecessor, could be grown for its fiber and seeds but had an intoxicating effect that Sativa did not. It became widely regarded in Europe as a therapeutic remedy during the 1800s.

Today, the strains are commonly known as Sativa and Indica, with much debate surrounding how much these two subspecies differ. Both strains have industrial, recreational, and medicinal use.

The difference in origins isn’t the only thing you’ll notice. The plant also has notable differences between the two strains, especially the contrast between Sativa vs Indica leaves.

While Indica plants typically produce round, broad leaves with dark coloring, Sativa leaves are a lot more narrow and dainty, with a much lighter pigment. These characteristics go a long way in contributing to the overall appearance of each plant.

In addition to the leaves, the Indica plant is bushy and short in stature. Even at maturity, it may only reach heights of just 3.2-9.8 feet.

The Sativa plant is as tall as its leaves are long, reaching heights of up to 19.6 feet. Indica buds are a lot more dense and stout, adding to their overall solid appearance.

Most people describe them as emitting penetrating, earthy aromas. Sativa buds are less compacted, and this, coupled with the thin, long leaves and tall stature, gives it a slender appearance.

They are said to have a gentler scent that is a smooth combination of spicy florals.

They do share some common characteristics, though, with both having marbled colored, soft seeds. Growers and consumers have also compared their sweet scents and sour undertones.

Sativa, known for its cerebral high, contains high levels of the psychoactive THC. Indica tends to contain lower THC and higher CBD levels, which is non-psychoactive. Indicas produce a body high. In general,  Indica vs. Sativa effects fall under the following spectrum.

Indica is the stoner’s favorite, thanks to its deeply relaxing properties. It acts as a sedative, placing your entire body into a deep state of relaxation.

It is ideal for nighttime consumption since it impacts insomnia, body pains, muscle spasms, anxiety, and other uncomfortable situations.

It may also include CBN, which offers additional benefits.

Explore our full selection of Indica weed seeds in our shop.

Sativa, on the other hand, delivers a rush of euphoria and mental awareness. Its energizing effects make it best for morning use. Known to spur divergent, creative thinking and focus, it is popular with artistically inclined users.

Although CBD is used therapeutically more than THC, Ayurvedic medications commonly include Sativa.

Check out other Sativa weed seeds in our online seedbank.

Both Indica and Sativa plants are native to hot regions and require plenty of light and heat, along with regular photoperiods when entering the flowering stage.

A sativa plant’s airy buds are less susceptible to mold than the dense buds of the Indica. Because of this, it thrives in warm and sticky climates. Indicas need an environment with controlled humidity levels.

Outdoor growers may protect their plants from rain and excess moisture or keep them indoors.

Indicas have a built-in resilience to harsh weather conditions, thanks to their origins. This resilience, coupled with a short growing cycle, makes outdoor cultivation viable, while its short, dense bushes make it ideal for indoors.

Whichever you chose, be sure to expose the buds to plenty of light to ensure large, healthy yields. We recommend topping or low-stress training to level the Indicas triangular shape.

Sativa plants are less resilient than Indicas due to their thin leaves, which provide less chlorophyll, but need less fertilizer and fewer feedings.

Sativa plants have a much longer flowering phase and reach great heights, especially in the first two weeks. The ScrOG method is an optimal way to control this.

What About Hybrid Cannabis Strains?

Hybridization combines the best characteristics of various strains to breed a unique blend of Sativa and Indica. Many also include Ruderalis. Cannabis Ruderalis is a little-known hybrid strain native to the Northern Regions of the globe.

The plant is small in stature, growing just 11.8-23.6 inches, and has thick foliage with large leaves like Indica, yet it’s lighter in color like Sativa.

Landrace strains are “pure-bred” with no genetics mixed with any other type of cannabis. Today, most Sativas and Indicas are Hybrids with varying Sativa/Indica ratios.

Growers use this strain for breeding auto-flowering marijuana plants that thrive in colder climates.

Many hybrid strains also induce a balanced high. Because there are many cannabis variations, it is hard to know what you can expect.

Visit our store for our full selection of hybrid weed seeds.

A Sativa vs Indica chart is a handy guideline for the effects you might experience, but the Hybrids lineage is better at predicting traits.

FAQs About Indica vs. Sativa vs. Hybrid

Is there a difference in THC and CBD levels?

Sativa is typically higher in the THC cannabinoid, with lower levels of CBD. While Indica is higher in CBD, this does not automatically equate to low levels of THC. Years of cross-breeding led to Indica-dominant hybrids with THC levels more typically associated with Sativa landraces.

What are landrace strains?

“Landrace” can be translated as origin, which is just what it is. A Landrace strain is the original ancestor strain of all subsequent hybrids. The term Landrace describes a strain that is either pure Indica or pure Sativa.

32 comments on “Indica vs Sativa vs Hybrid”