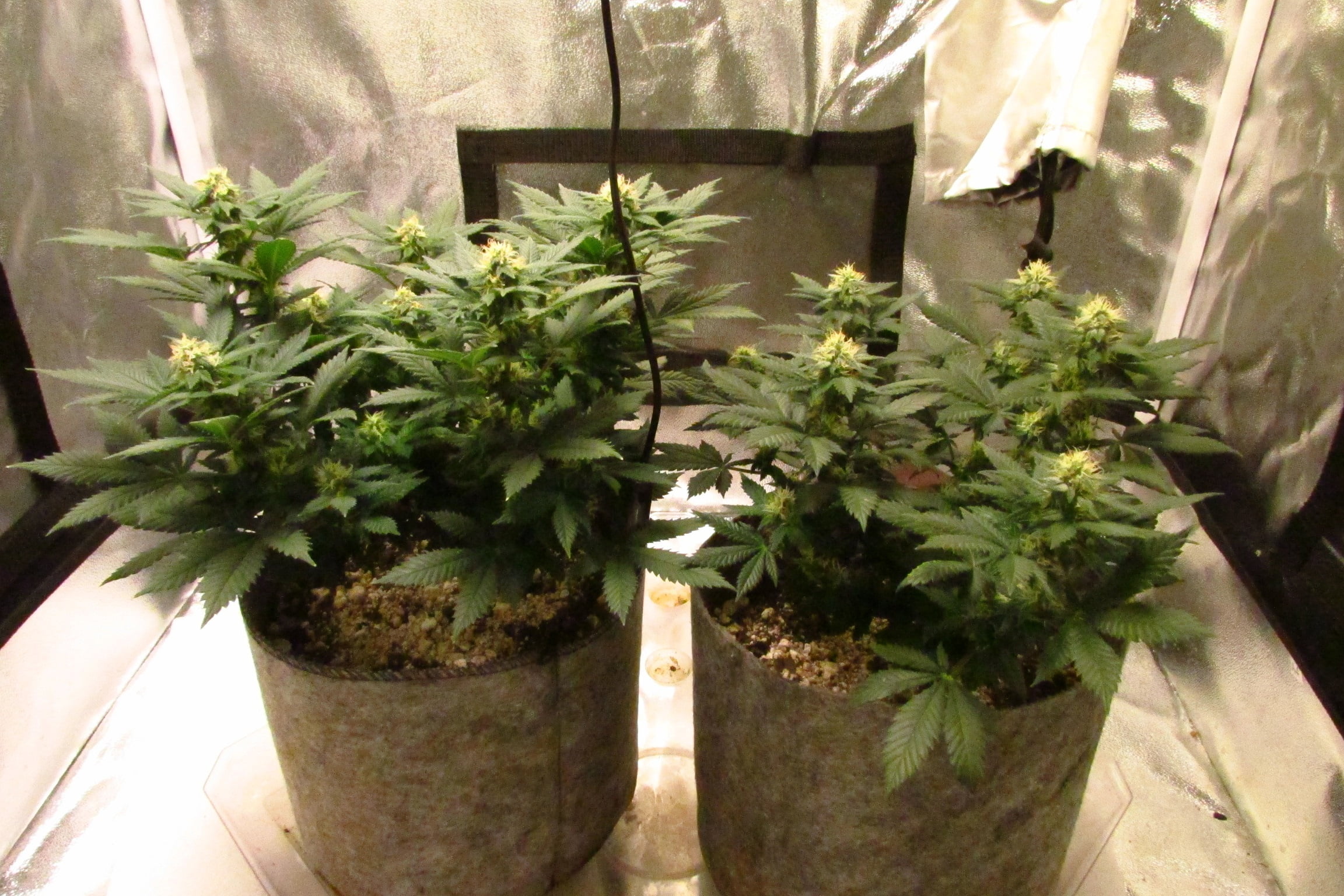 If you’re a novice when it comes to cultivating cannabis, White Widow is the way to go!

In general, White Widow plants are quite easy to grow. They’re known high-yielders and reward growers with a strong payoff. White Widow is also known as one of the most resilient strains capable of withstanding a person’s cannabis-growing blunders. This makes them a perfect plant for beginners.

When grown in a small space, the White Widow’s small and compact size gives it an advantage, making them preferable for indoor, stealth grows. If you don’t want to have a monster plant taking over your limited grow space, this plant may be a perfect match for you. If you’re planning to grow White Widow outdoors, it’s best to have a sunny or Mediterranean climate.

The flowering time can take up to 60 days and you can expect a yield of around 18 ounces per square meter of plant.

Check out how this grower was able to successfully cultivate White Widow plants for his first time ever.

Received 10 White Widow seeds from ILGM yesterday and started germinating 2 seeds this morning via the paper towel method. The paper towel is dampened, placed in a Ziploc baggie, and is toasty warm in the grow tent which has been darkened to a pleasant 77 degrees F.

Peaked in on the two little White Widow seeds and they already have two itty bitty roots poking through. They’ll stay in the paper towels for one more day to let the roots get longer so they have a better chance of survival in the seedling pods waiting for them.

Woke up to ¾ inch roots coming out of both seeds and placed then into the seed started plugs and then under the dome.

One of the seedlings looks fine and has the second leaves starting to open up. The other one has the first leaves curling under and the second leaves poking through. They had a CFL over them but they weren’t showing much growth so the 30W LED was put over them just to see what would happen.

The pH is between 6.0 and 6.5 so maybe they’re just generating roots.

The little ladies did very little other than sprouting in the peat plugs (will NOT use again). After no growth whatsoever yesterday, did a transplant out of the plugs and into peat pots which contain: 1 inch of Perlite on the bottom for drainage and 3 inches of Fox Farms Ocean Forest on the top.

Both pots were flushed to ensure there weren’t excess nutes which would burn the babies.

Two hours later, they weren’t showing any signs of transplant shock. They were watered with pH 6.5 water and humidity is at 42% while temperature is at a perfect 79 degrees F.

It’s their 8th day and the plant on the left is getting worse. Don’t think she’s going to make it. The White Widow on the right seems a bit stronger. Misting when the tops dry out, watered both this morning because the pots were very light. Maintaining the temperature and pH in the hope of helping the one on the left pull through.

On Day 9, the right plant appears to be recovering from the transplant and growing a bit. The plant on the left is really having a hard time but she’s not dying nor producing any new leaves! Come through babies!

Apparently you shouldn’t wait for them to have such a long leg before transferring them to their pots. ¼ inch or less is good enough. Next, don’t go feeding them a bunch of stuff right off the bat. Use simple methods and use as few products as possible until you get a better handle of the situation.

Just leaving them alone for now. They receive nothing but pH-ed water, lots of light, warmth, and humidity. It’s best not to feed them anything until they have 4 to 5 true leaf sets.

The little seedling died. These are the plants in the grow room now.

The larger plant is the original plant which was planted on the 8th of December. It wasn’t growing very well so some adjustments had to be made. A 300W LED was added to the lights setup and the plants are finally starting to take off.

The second, smaller plant is only 3 days old. It grew from in new Aerogarden with the LEDs extending up to 24 inches.

The single, older girl is finally doing well but is behind in her growing rate due to not knowing how to proceed in the beginning. Luckily, things are looking better. Added a small humidifier and it’s making all the difference in the world because it keeps the room humidity between 70% and 80%.

After the death of the first seed, the second girl is at Day 9 and is going strong. She should catch up to the other girl in a reasonable amount of time.

On her 13th day, the younger girl seems to be doing pretty well and she’s working hard on producing her second set of leaves.

Wasn’t able to post on this grow journal but was able to maintain the girls.

During the period without updates, the girls grew like weeds. They are behind in the growing curve but they’re very healthy. The largest one is the one planted last December and has about 7 decent arms coming off of it. The smaller one was transplanted out of the Aerogarden about a month ago.

After the shock of going from water to soil, and getting used to the new additional light, it’s finally taking off. It has about 5 decent arms on it but they’re still little.

The larger plant (right) is at Day 74 from seed and the second (left) is at Day 62. So much growth took place and all they needed was a second light.

They’ve only been getting half the recommended dose of nutes with water every other day (because the thirsty girls need it). However, the plants do receive full-strength CalMag on feeding day. That might be the reason why the girls look so good.

Day 77 for the larger plant and Day 65 for the smaller plant.

They’re still looking very good and appear to be growing nicely in the light. The larger one looks like she may need a transplant and the second one is trying her best to catch up.

The girls are still looking good! Lots of bud sites and little white hairs showing. They aren’t very big still because of the screw up with not enough lighting at the beginning.

This is their 3rd week in flower now. The girls are going nuts! They have lots of white puffs and hairs coming out of them. The smaller one is even catching up with the bigger one and seems like she’ll manage to catch up with her older sister.

Other than the fact they’re drinking like crazy, they look good. They’re a botanical masterpiece.

It’s only their 5th week in flower and their physical appearance will just floor you. There’re a lot of white hairs all over the place with one or two amber ones and lovely buds beginning to swell up. They even have a little frost developing on the tips.

It’s Week 6 and the girls continue to look great, producing lots of amber hairs scattered across nice buds while getting pretty sticky. The finish line is only a couple weeks away.

Harvested the beauties yesterday when they had 80% cloudy and 20% amber trichomes. Not a huge harvest but it was enough to keep anyone happy.

What did you learn after your first attempt in growing cannabis?

BACK TO TOP
Preparation of Water for Irrigation of Cannabis
Using The Moon to Grow Marijuana
Making Marijuana Clones Is Easy!