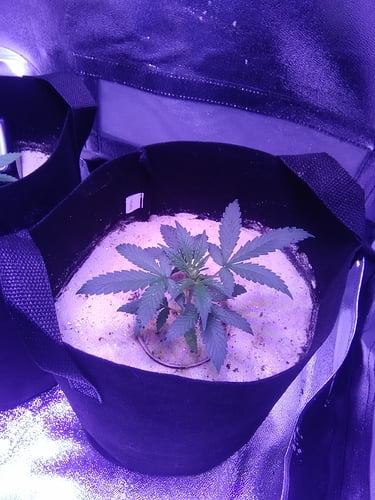 The Great White Shark and Sour Diesel cannabis strains are both sativa-dominant hybrids that produce an intense head high.

Great White Shark, also more popularly known as “the Peacemaker” in the cannabis community, is a potent cross among Super Skunk, Brazilian, and South Indian strains. It has moderately high THC levels which range from 12-15%. Users who have tried smoking the Great White Shark report an immediate onset of intense, head high that makes you distracted, and cloudy. This spaciness is coupled with a slowly spreading warm buzz that takes over the mind and body to leave you relaxed and pain-free.

This bud also has an aroma and taste comparable to sweet tobacco but with a pungent aftertaste upon exhale. Their buds are small, fluffy, and dark green with rich amber hairs, thick trichomes, and sweet resin.

Sour Diesel, also known as “Sour D” or “Sour Deez” is a marijuana strain whose origins are frequently debated in the cannabis community. Whatever its parents are, you can expect this strain to give you a high like no other.

Expect an invigorating, cerebral high that makes you more creative. This strain’s effects are also the reason why this is prescribed for medical patients who want to relieve anxiety, depression, and chronic fatigue. Sour Diesel has one of the most pungent aromas of any strain and you can expect a smooth, and lemon aftertaste. It’s characterized by dense light nugs covered in orange hairs.

Let’s see how these two strains fair in this grow journal.

This marks the start of the autogrow composed of 2 Sour Diesels and 1 Great White Shark. 1 of the Sour Diesels might grow under 12/12 light from the beginning to end as an experiment. Here they are two days after sprouting. One Sour Diesel seed is still germinating.

These three plants are all in Miracle Grow soil but they’ll transfer to Fox Farms Ocean Fresh soil soon. They are growing under a single 100W CFL right now with an 18/6 light schedule.

Unfortunately, one of the Sour Diesels didn’t pop out of the ground so I’m germinating 1 ILGM White Widow auto. That makes three plants in total for this journal.

I got home today and found what looks to be nutrient burn from Miracle Grow soil on the remaining Sour Diesel so I transplanted the plant. Now I’m not so sure if they’d survive but I have more seeds if they don’t. I transplanted them to organic jiffy soil and will use this throughout the

The Great White Shark seedling’s leaves are pointing upwards. It looks thirsty. This usually happens when you sprinkle water instead of a full watering, the plant struggles with root growth. In addition, the pH needs to be between 6.3 and 6.7. Watering should also be done from the side, not dumped on them.

Just transplanted into 3-gallon smart pots with Fox Farms Ocean Fresh soil with DE powder mixed in the bottom and organic jiffy soil on the top with a 2-inch layer of sand to kill any gnats roaming around. Hope it works out. The White Widow died after her leaves were accidentally pulled so we’ll just stick with the Great White Shark and the AK-47 for now.

They’ve grown bigger fan leaves since the last update. Check out the Sour Diesel (left) and the Great White Shark (right). They really got over that nutrient burn from the Miracle Grow soil.

These strains are fast! The Sour Diesel is starting to flower already.

Day 33 from sprout and they receive some flower fuel with a little hydrogen peroxide to maintain the soil pH. The Great White (left) and Sour Diesel (right) are much taller now.

On their 44th day since sprouting, the two ladies are reaching for the skies… or in this case, the fan. So glad there aren’t any major roadblocks at this point of the grow. The Great White Shark is the taller of the two.

And here are more photos in regular light.

They’re 48 days from sprout and had to be tied down today. This should open up some more colas.

Here are the two ladies, both 66 days old.

The Sour Diesel is the stickiest and best-smelling of all the plants I’ve grown. The yield is going to be under an ounce.

The Great White Shark is no slacker. She’s pretty sticky too and is smelling great.

I honestly think they’ll be done in two to three weeks. For now, they still have mostly cloudy trichomes and only a couple of ambers. Just watered them with full-strength CalMag ¼ of all the nutes to help them wean.

The Sour Diesel is ready for harvesting!

Here’s the Sour Diesel undergoing the not-so-delicate curing process. Not much to see here but she’s smelling really good.

After drying, the Great White Shark is now curing. The dry weight for these two plants should be determined in a couple of days.

The final weights are in. The Great White Shark produced 18g of dried and cured buds while the Sour Diesel produced 14.1g. Not bad considering two of their sisters (the other Sour Diesel that never germinated and the White Widow used to replace it) never made it past the seedling stage.

When it comes to growing marijuana, having backup seeds can spell the difference between a successful grow and ending up with an empty grow tent. Fortunately, 50% of the seeds used in this grow germinated and grew until harvest time.

In the end, this grow journal ended on a good note with two successful plants. Coming from different strains is a plus too. It means the grower will have two different weed flavors and effects to choose from.

Can you think of other advantages of a multi-strain grow?