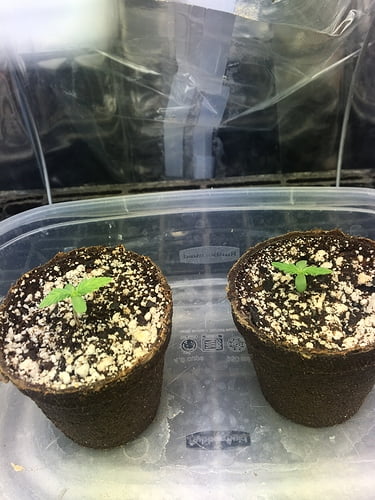 The Blue Dream strain is a strong hybrid which has gained legendary status in California. It became popular as a daytime strain because if its “pick-me-up” effects without being overpowering. It provides a full-body relaxation and fans of this strain praise its capability of inducing a calm form of euphoria. It’s the perfect strain for a novice smoker.

It’s also compatible for newbie marijuana growers. Blue Dream grows tall and is easy to maintain indoors. This strain is moderately difficult for outdoors due to its sensitivity to extreme weather changes. Outdoor growers are advised that this strain prefers Mediterranean or subtropical climates.

Check out this grow journal highlighting the process of growing ILGM’s Blue Dream.

Today marks the beginning of some fun stuff. Two Blue Dream plants from ILGM broke the surface of the soil this morning. They were then transferred to peat pots with a mix of Fox Farms Ocean Fresh and some starter mix.

Looking back at the germination, the process started with paper towels and soaking. The soaked seed soaked about 20 hours and was still floating a little until it sank. Three days after putting it in the soil mix, it finally broke the surface. The seed placed in the wet paper towel cracked open last Tuesday and is now about ½ inch tall. Between the two methods, the paper towel germination is a bit quicker.

Today, the seedlings are 4 days old. Both look healthy despite the fact keeping the humidity just right for them is a struggle. Adding a humidifier to the set up really helped a lot. The humidity is still low but it has improved. Both plants are nice and green but they aren’t growing much.

Took these photos at the end of the day on Day 5. They’re inching their way up.

After some duct tape and weather stripping, the doors and small holes were sealed and the humidity is doing pretty well. At night time, it’s about 42 %.

They are turning yellow and have drooping leaves. Unfortunately, this is due to overwatering. They were supposed to just be misted at this point but they were being watered with a gallon jug. This is how the discolorations look like.

Putting a fan on them should help them dry out and it worked out just fine. After 48 hours, they were watered with a cup of water.

On their 13th day, they’re recovering from being overwatered but they still seem small for their age.

Things are moving along nicely. The girls are picking up speed. One of them may have suffered a bit of burn. The leaves are yellowish so the soil was changed and switched to a mix of seed starter and a little Fox Farms Ocean Fresh which is what they had started in. Hopefully new growth will be a nice green.

Both plants are still in the seedling phase. One plant is doing nicely and growth has started to pick up a bit. Second plant needed a flush yesterday. She has sulfur deficiency. She’s still growing but she’s been putting out yellow and deformed leaves.

Both were flushed using pH 6.44 water with ½ tablespoon of Epsom salt per gallon.

Check out the plants on their 26th day. This one is doing better with very little yellowing of the lower leaves.

Meanwhile, this one is still recovering from the issue. She received an all-in-ne nutrient with sulfure added at half strength. Next feeding will be full-strength.

Here are photos of both girls. Clearly, the one on the right is doing so much better. She seems to be handling the nutrients just fine.

The damaged plant is finally showing signs of recovery. New growths look good and she’s overall much greener. This is due to the sulfur and CalMag which were added to the Fox Farm nutrients. This combination allowed her to make improvements with the last feeding.

The healthier plant is still doing great and is still growing like it should. She was FIMMED just yesterday.

Some lights were added to the setup: a 23W 6500K provides lights from each side.

The damaged plant has improved a lot but her growth seems to have slowed down because she’s only half the size of the other plant. A lot of the green has come back to the plant and given life to it. It’s been fed with pH-ed water because the PPM is high at 2582. Next watering will just be a flush to get rid of some of that extra nutrients before going to flower.

The second plant is doing well although she’s starting to show signs of nitrogen toxicity. She has slight burnt tips. She’ll be flushed with the next watering to reduce the toxic buildup.

It’s their 60th day. Switched all the lights from 6500K to 2700K and the timers are on 12/12. Both plants seem to be doing good but still not using any nutes with the watering. They’ll have to get used to the new light schedule before receiving nutes with half strength.

It’s only a week into flowering and you can already see fine, white hairs!

Both plants are 11 days into flowering. Starting to show white hairs all over the place. One plant is stretching like crazy and moving towards the light every day. The one that had the issues is not growing as tall as her sister. 4 CFLs surround the plants for added light and to help the lower buds develop a bit more.

Buds are starting up all over the ladies.

Both plants are doing well on the 26th day of flowering. They’re starting to show some sugary frost on the buds. The plant on the right is still growing slower. Amazing how different the colors are despite being the same strain.

Here are a couple photos of the ladies. The one on the left is the better plant. The one on the right will obviously not be as big as the other one but at least it’s something.

Their colors are fantastic. The photos don’t do them justice. This weekend will be harvest time for both of them. They’ll be placed on a 48-hour dark period before they’ll be cut down.

Today was the day of harvesting. Here is what they look like just before cutting down.

Here they are all trimmed and pretty.

This grow was a success. It ended up with 1.4 ounces from 2 plants. One struggled but the yield was still good overall. The smoke was pretty amazing. This strain produced a nice head high!

This is the grower’s first time to cultivate marijuana. Despite the problematic plant, it was still able to produce half an ounce. The only snags in this grow were humidity problems and nute burn but it was easily resolved in a way that any newbie grower can easily do.