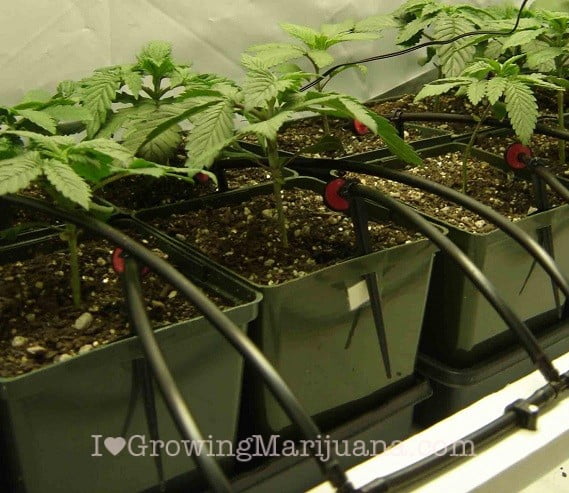 Both systems will work well in a marijuana garden. With the reservoir system, you’ll use horticultural clay pellets or pea-sized volcanic lava in plastic pots. The containers are put in a tray that contains a water-nutrient solution that is about one quarter of the height of the container. A container that is 10 inches high will have about one inch of soaking rock. A large portion of the medium stays above the waterline. Capillary action keeps the rock moist by drawing up water. All the clay pebbles in the container remain moist as long as water says in the reservoir.

As soon as the water-nutrient solution is added to the tray, plain unenriched water needs to be added to keep the water level and strength of the nutrient solution at equilibrium. As water evaporates, the concentration of nutrients rises. Adding water will lower it.

Most of the literature suggests that roots should not be sitting in water. There are two reasons why this is occasionally true. First, the sitting water might not have dissolved oxygen. The roots utilize oxygen and will incur diseases without it. Second, some mediums are incredibly dense and take up so much water that there isn’t any air left. The roots then suffer from a lack of oxygen. In a reservoir system, large air spaces are left in between pieces of clay pebbles or lava so that there is enough air and the roots can access the oxygen more easily. Download my free grow guide for more tips&trick at this link

Roots that grow into the water look different than those that grow above it. They won’t have the fine network of root hairs and are denser even in water that has been depleted of oxygen. Other roots appear to supply oxygen to the roots in the water.

Marijuana gardeners concerned about a lack of oxygen for the water roots can infuse the water with the gas with a small air-stone attached to an air pump. The column of rising bubbles moves the water around. A larger amount of the surface area contacts the air and absorbs oxygen while releasing CO2.

The never ending drip system also utilizes clay pellets or pea-sized lava in containers that are sitting in a tray that drains into a reservoir below. A pump supplies a constant gentle stream of water through the tubing to each container so that a wispy stream of water is always trickling over the stones. This system is rather easy, but it still promotes vigorous growth. Keeping the drain hole blocked with the tubing that raises the drain to the desired height makes for an easy combo constant drip/reservoir system. With this, the marijuana plants are receiving a constant stream of water and the water roots are given space in the reservoir.

Small, submersible pumps don’t use that much power and produce small amounts of heat. They can be used in reservoirs effectively without running the risk of boiling the roots. In general, the water temperature needs to be kept at around 72*F.

Check out my marijuana seedshop  for a wide selection of top-quality marijuana seeds . We ship to the United States, Canada, and numerous other countries. All customers get 24/7 grow support. And don’t forget to download my free grow bible…

1 comments on “Hydro Marijuana Growing – Better Use A Reservoir Or Drip System?”