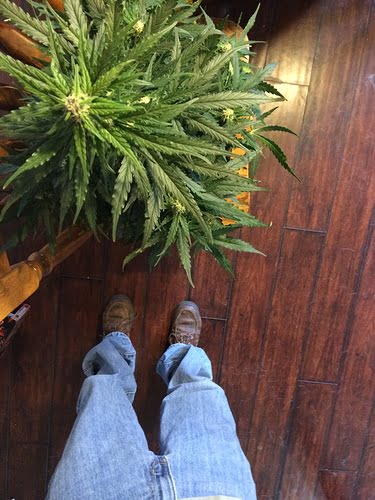 White Widow is among the most famous strains in the world. It creates a powerful burst of euphoria and gives plenty of energy, stimulating both conversation and creativity. Its buds are white with crystal resin, giving you a fair warning of the potent effects to come.

When it comes to growing White Widow, they’re one of the easiest strains to cultivate, can reach a height of 2 meters, can produce 40 to 99 grams per square meter, and spend an average of 7 to 9 weeks in flower.

Meanwhile, Blueberry has a legendary status because of its sweet flavors combined with it ability to suppress pain and relieve stress. Growers admire this strain because of its high THC content and colorful hues.

Even novice growers find it an easy strain to cultivate. It can be as tall as 2 meters, with an average flowering time of 7 to 9 weeks.

This grow journal records cultivation of both the White Widow and Blueberry in the same conditions.

The following supplies were used at the start:

Last July 10th, the White Widow seed was soaked in water and by July 11th it was placed in paper towels. The tap root appeared the day after so it was placed into the 1 gallon pot. The White Widow was first watered with 5mL of Advanced Nutrients Grow, Micro, and Bloom with about 7mL of Voodoo Juice and B52, with an additional 5 grams of Actinovate.

5 days later, the seedling sprouted from the soil.

So far, it seems like this girls doesn’t want to take off. She’s three days old now. Usually, White Widows have gotten more growth by now.

She’s 7 days old. It looks like she’s growing albeit slowly. She looks a little droopy though.

Here’s an Auto Blueberry that is only 3 days old.

Just dropping in with some updates. Everything is going well so far. The plants are a little small. Right now, it’s a matter of adjusting the lights to help them stretch out. Just put it 12 inches above the plants.

Here is the White Widow 19 days from sprout.

And here are updates of the Blueberry auto. She’s 15 days from sprout.

Came back from out of town and noticed a little growth. At 24 days old, she was able to put out even more leaves.

And here is the Blueberry at 20 days old. Despite the age difference, it seems she was able to catch up to the White Widow.

In general, they both seem to be awfully short for their age. Maybe it’s time to switch out the lights. Up until Thursday, the lights were 24 inches above them. Then the lights were readjusted to 12 inches away. They seemed to appreciate that and grew a couple of inches towards the light.

This is the White Widow over a month old. Over the last couple of weeks, her growth finally took off. Although she still leaves much to be desired, her appearance now is definitely an improvement from the last update.

Here is the Blueberry at 29 days of age. She’s taller and a lot bushier than the White Widow now.

Just dropping in with some updates. It looks like the White Widow has stopped growing and has concentrated her energies into putting on bud. She’s 46 days old.

The Blueberry has outgrown the White Widow and is getting sticky. Look at her 42 day old self.

So far, these plants are the best of this grower’s personal experience.

They have filled up the box! This White Widow is 54 days old and has slowed down on drinking. The buds are also getting a lot bigger over the last week.

Even the 50-day old Blueberry has slowed down on her drinking and has concentrated on putting on bud size.

The White Widow is about 14 inches and the Blueberry is 20 inches tall. They may not be as tall as desired but they are bushy enough.

Decided to start flushing. No problems with this grow so far. Check out the up close photos of the buds.

Blueberry is also being flushed at 55 days old.

Hopefully, it’s not too early to flush.

Here’s the Blueberry auto right before being jarred. She’s been hanging for 8 days. She was 64 days old when she was chopped.

The White Widow is still hanging. She probably still has three more days left before being ready. She was 72 days old at harvest.

There’s a big difference between the smell of the two. The Blueberry stinks up much nicer but the carbon filter wasn’t containing all of it.

It’s weight was quite disappointing. It’s not even half of the Blueberry. Still not bad, the total yield for this grow is 70 grams.

Overall, the White Widow lagged behind the Blueberry despite being exposed to the same environment. The ILGM Blueberry autos though are really nice. Try to finish Blueberry in 60 days. It seems they are great at that age. These ILGM seeds are good producers too.

This grow is semi-successful.

Perhaps one of the reasons why the White Widow did not grow to its potential is the light. Perhaps a more powerful light or some additional lights shining down on different areas of the plants could have spelled the difference and helped the White Widow grow a few more inches. Meanwhile the Blueberry is a smooth-sailing success.

Which cannabis strains do you want to compare next?