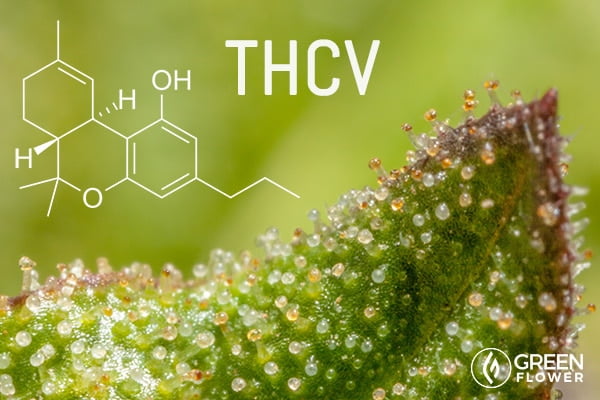 Tetrahydrocannabivarin (THCV) is a compound found in the cannabis plant that is a psychoactive but in a different way than THC. THCV has a variety of great health benefits that make it quite different from cannabinoids such as CBD and THC.

You will likely find it hard to come by this cannabinoid since it is usually present in limited amounts. However, rest assured that this article will give you information on where to find strains with good levels of THCV. Regardless of what your reasons are for consuming cannabis, knowing the benefits of THCV is essential to becoming a knowledgeable consumer. As more research is conducted and the awareness raises, its popularity is sure to rise. So far, scientists are already aware of many positive uses for this compound that patients around the world can benefit from.

What is Tetrahydrocannabivarin (THCV)?

THCV is unique in comparison to other common cannabinoids because unlike CBD and THC it does not derive from CBGA. Tetrahydrocannabivarin is derived from THCVA through a process of disintegrating CBGVA with UV light or heat. Steep Hill Labs has named THCV as a more potent psychoactive compound having a shorter effect than THC.

When researchers reported the affects THCV has on recipients, the high is described as allowing you to remain mentally sharp and offering more of hallucinatory experience. But not all research shared the same potent results from THVC use. Some research reports this cannabinoid restricted certain impacts of THC while at the same time, other properties are increased.

One study where human volunteers were given either a placebo or 10mg oral pure tetrahydrocannabivarin on a daily basis over a five-day period revealed 9 out of 10 volunteers thought THC was not as strong. While this is great information to give us an idea of how THCV works, more research is required since this was a small controlled experiment.

It is possible that the outcomes of these studies differ because tetrahydrocannabivarin responds like a CB1 receptor agonist (like THC) in high amounts. On the flip side, when taken in smaller amounts, this cannabinoid functions as a CB1 antagonist that could get rid of your high. One reason may be that it is likely the participants in the study were administered just enough THCV to cause the antagonist results.

However, Steep Hill Labs insists that tetrahydrocannabivarin has more of a hallucinatory effect than a THC high and also does not last as long. With that being said, there will need to be additional studies where participants consume larger doses of THCV for us to have a better understanding of its effects.

THCV, like other cannabinoids, can have a very positive effect on your overall health. This cannabinoid is very beneficial for patients who have health conditions such as type 2 diabetes, obesity, anxiety, Parkinson’s and PTSD.

Researchers conducted experiments on mice that showed tetrahydrocannabivarin stopped THC from raising their heart rate. The scientist conducted this research with the intent to discover a safer cannabinoid that does not cause the unfavorable psychiatric results (such as paranoia). This is a significant finding because it means those who struggle with anxiety will be able to use THCV without any dangerous risk.

This study on mice also revealed that THCV had no serious impact on appetite or weight. What did change is the amount of energy they used. As a result, they decided that THCV could possibly be an effective way to treat obesity.

So far, we do not have enough research to say for sure the effects this compound has on PTSD patients, but some scientists allude to the possibility of it being helpful for this condition.

The Therapeutic Benefits of THCV

So, by now you are already aware that while THCV may be some likeness to THC, however, it is its own unique entity when it comes to health benefits.

Here are some remarkable THCV benefits you will want to know about.

Studies report that THCV is a blood sugar regulator and it also decreases insulin resistance.

THCV boosts bone cell growth. This is causing researchers to consider this cannabinoid as a potential form of treatment for bone-related diseases, including osteoporosis.

If you are a cannabis user who is concerned about weight gain, THCV may be the solution. While THC stimulates appetite, THCV is said to do quite the opposite. If you want to lose weight, this cannabinoid could be a great way to help.

PTSD patients who consume THCV will experience a reduction in anxiety attacks and do not have to be concerned with holding back emotions.

How to Find Strains with THCV?

We aren’t naming every possible option for getting your hands on strains with high levels of THCV, but it gives you some of the more common ones that are known for this. The average cannabis strain has just a small amount of THCV which create a challenge when it comes to getting the benefits you want. Eventually, more high-level THCV strains should become available, since more users are becoming aware of it.

Strains with large amounts of THCV can be taken in the flower form, made into an oil, edibles or extracts if you prefer more potent cannabinoids. When searching for high-THCV strains, look for African sativas like Pineapple Purps and Doug’s Varin. African landrace sativas, such as Durban Poison, also have a high concentration of tetrahydrocannabivarin. If for any reason, you are not able to find African sativa, there are strains with hybrid African makeups which gives it more THCV. For example, because Cherry Pie is derived from Durban Poison, it is likely to have a good amount of this cannabinoid.