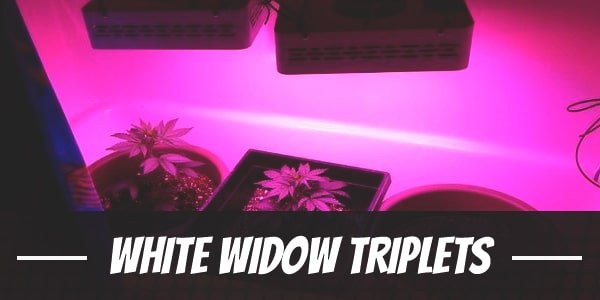 White Widow is one of the easiest marijuana plants to grow. Even newbies will be impressed with the level of ease provided by this strain. Among different strains of cannabis, White Widow is an enthusiastic plant that just wants to please its owner.

Once their grow cycle is started, you can expect explosive growth overnight. They can grow into a gorgeous marijuana plant which sparkles with crystals signaling a more than decent THC content. With a quick flowering time of 8 short weeks, this strain is enjoyed by newbies and expert growers!

Be careful not to touch the stems and leaves too much otherwise the crystals might get damaged and your fingers will get sticky with resin.

This grow journal documents the cultivation of three White Widow seeds from ILGM.

Bertha’s the largest seed by far and was accidentally planted about an inch deep so she came out pretty strong! Here she is at two weeks from sprout.

And here’s Tiny at 2 weeks old. She’s still the smallest among the siblings.

Despite their differences in height, all three girls are showing pistils today. Each girls is under 100W CFL at the moment and are starting to show signs of “light overdose.” Couldn’t find a good sweet spot so they had to be placed under 18/6 light cycle at 10 days old. It’s a bit soon but they appear to be doing well.

They have been sprayed a few times, about three times a day for the most part. However, for the past four days, they’ve been given 5 ounces of water twice. The watering seems to be keeping the heat stress at bay but Bertha showed a curled tip this morning so they were all given a solid pint.

Everything looks great so far. Even with these CFLs, the girls appear to be doing pretty well. Eager stretched a little then fell over a little bit. That lean will be used to do some LST on her later on.

All three girls are in Fox Farms Ocean Forest and the two top inches is FFOX missed with Miracle-Gro Moisture Control, and 20% perlite. So far the soil is staying loose and appears to be drying/draining pretty well.

Lights will be provided to the three plants via two mars Hydro 300W LEDs which are due to arrive in a few days.

Went out to check on the girls and their smell despite being only 2 weeks old is a surprise. It’s neither sweet nor dank but it’s strong enough to be smelled from 4 feet away. The tent and filter system needs to be installed sooner than later.

The two new Mars Hydro 300W LEDs came in today. Right on schedule! The lights were installed so the girls can receive plenty of much-needed light. The lights are set at 14 inches above the canopy and no bad reactions so far.

All three are 16 days old now and are pinned down to get their LST officially started.

It’s amazing how quickly things change with these autos. Just a couple days ago, the girls started putting out a faint scent. Now, the scent is very similar to buds as it has shifted to a pungent sweetness.

The LEDs had to be raised a couple of inches higher as the ladies were getting some light toxicity as shown by greying on smaller leaves. They were misted as well.

The girls are three weeks old today. Eager is responding pretty well to the LST. She needs to stretch a bit more so she can be pinned down again. Bertha is staying bushy but this may be because she’s getting overlapped from both LEDs. And finally, Tiny has stretched and is now the tallest of the bunch at 11 inches. Bertha on the other hand is only 8 inches tall.

Here’s a group photo of the girls today.

Here’s a close-up of Eager. She’s the only one who is not showing a lot of pistils yet.

This is Tiny. Not so tiny anymore as she is the tallest among the three.

And finally, this is bushy Bertha. She’s darker compared to the other girls and she’s very squat at 8 inches tall but still looking good. She needs to get taller and open up a little more so more light can get inside.

Girls seem to be responding to the increased water after being watered one quart each.

Grabbed some more photos this morning. Bertha and Tiny are obviously on their way to flowering. Eager, while being the early leader in growth, has slowed down a bit and does not appear to be showing signs of flower just yet. Maybe the small attempt at LST was more stressful than intended.

Here they are at three weeks and two days old.

Raising the lights definitely kick started something! There’s an explosion of growth! Bertha, always the bushiest, has really opened up and has spread her branches to allow more light to the inner bud sites. She also picked up about three inches in height since Friday.

Eager sprouted up a few inches over the weekend and has produced several more budding sites. She’s not showing a lot of pistils just yet.

Tiny took off like a rocket. She stretched and spread her wings and presented several more flower sites.

And here they are. Three girls in a shower! Bertha is a bit wilted. Both she and Tiny had dusty bone-dry soil. Only light moisture remained in Eager’s pot. Each of them were hit with 6 cups of pH 6.5 water and they should perk up by tomorrow.

Today marks the girl’s one-month birthday and they are doing awesomely. Two are in full-on flowering stage while Eager is finally showing more pre-flower signs. Each is given their full-gallon watering today.

Here they are in all their glory. They have really exploded this past week. For being only four weeks old, these plants are amazing.

Eager here has just entered pre-flower, apparently maturing about a week or so behind her sisters.

Watered the girls today and each was given a gallon with 6mL of Mammoth P and a few drops of Super Thrive. Bertha was looking a little rough. It appears getting overlap from both lights has been a bit much for her so she swapped places with Eager. This will lower the light intensity on Bertha. The next few days should show if she becomes happier.

Girls are doing pretty well. Here are some bud shots for today.

They are just getting started and are fairly firm. Eager still has not flowered but she looks like she’s about to flower tonight.

Eager almost showed signs of being hermie but she turned out producing a calyx, not a nanner. They’re getting a gallon of water every third day now. Mammoth P and Super Thrive are added to each watering. They got one dose of Nectar for the Gods nutes and appear to have done well with it.

Since these are autos, Tiny and Bertha should be ready to harvest in 3 to 4 weeks. Eager fell behind and is not even fully in flower yet so who knows how long she will take. The attempt on LST definitely stressed her out and slowed her growth cycle.

Showing about 10% amber on both Tiny and Bertha. They were sort of a disappointment because the buds did not swell at all.

The third plant, Eager, is budding well but not even showing trichomes.

The two White Widows stopped maturing at 10% amber. The buds did not fill out and the trichomes just stopped developing. Harvest was done too early and they yielded a total of 6.5 ounces before drying. During the first couple of weeks of curing, they were supremely sticky – the slightest touch will make you need to wash your hands.

It’s curious why the buds stopped maturing at 10% amber. The grower suspected hermies and accidental pollination. These reasons contributed to the need to be harvested prematurely. While only 6.5 ounces of wet bud was produced, it’s all right considering the circumstances.

Have you experienced cannabis buds that are stubborn and won’t mature?