Dabbing: Is It Dangerous?

Dabbing has been around for the past ten years, but it is only in recent years that it has become a popular way to consume marijuana. This is due to the legalization of marijuana consumption in a few US states. There isn’t much information out there about dabbing, also known as ‘dabs.’ We do know it uses butane hash oil (BHO), honey oil, budder, shatter, or wax. This article will cover the basics of dabbing and whether it is safe to partake in it or not. 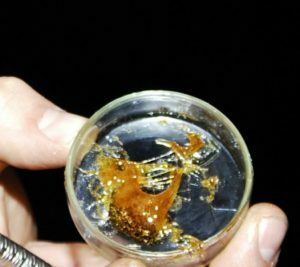 Dabs are a marijuana concentrate that are at least four times stronger than smoking a joint, delivering the high to users all at once rather than over time as with smoking. Dabs are brown or green and look thick and gummy, like hot wax. Users generally partake in dabbing by smoking through a modified bong, which leads to that immediate, intense high. Its potency is no surprise, given the fact that the product being smoked is comprised of sometimes higher than 95 percent THC.

Dabs are made by extracting THC as well as other cannabinoids from marijuana, often by using butane or carbon dioxide. The result is a sticky, wax-like consistency that is heated up and subsequently smoked. THC is easily the main reason for the resulting intensity of the high, but some other compounds like CBD, terpenes, or aromatic oils may also be extracted.

Why is it considered dangerous? 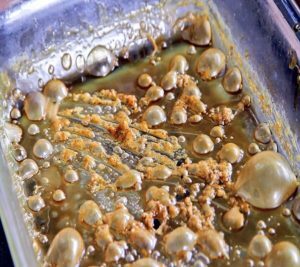 One of the main reasons dabs are considered dangerous is because the process used to produce them is a huge fire hazard — especially when done by amateurs. The sad fact is, deadly accidents happen quite often. The process of making dabs includes the use of butane gas to remove the THC from marijuana. This mixture is then heated up to evaporate the butane and leave only the concentrate for smoking.

This part of the process is the dangerous part — often gas remains in the air, and an open flame can quickly cause an explosion. Some of these explosions are big and some are small, but either way it is a fire hazard due to the ease at which one tiny spark could cause an explosion and house fire.

Both in states where marijuana is legal and illegal, this process will likely be done more and more frequently, especially given the number of instructions and YouTube videos found online to describe how to do it. With so much information being out on the internet for everyone to read, anyone can feel like an expert and wants to try the dangerous process at home. This is when accidents happen, whether they were through legal operations or not.

Other risks lie in the actual smoking of dabs. People smoking it for the first time may not be aware of the intense effect it will have, and other chemicals may also be smoked along with it. There are not many studies on the effects on dabs, so it may also be unsafe to presume that dabbing has the same risks as smoking ‘regular’ marijuana. It has been hypothesized that it could lead to increased tolerances and worse symptoms of withdrawal, given its extreme concentration. 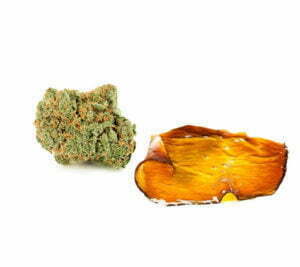 If you have never seen dabbing before, you might be shocked by how it looks. Dabs are heated up on a nail or in a glass bong by using a blow torch — making it look awfully similar to smoking crack to the untrained eye. This has helped along the bad reputation that dabbing has been receiving lately, with references not only to smoking crack but also to drugs like meth, making marijuana suddenly seem ‘hard’ and dangerous. This could potentially cause setbacks in the legalization movement across the United States.

Because of the high concentration of dabs, amateurs might smoke too much all at once and could have an uncomfortable high or even could pass out. This makes it scarily similar to the experience of overdosing that comes with most other drugs. Part of the reason marijuana is popular and becoming more widely accepted in the United States (and around the world) is because it is impossible to overdose on marijuana. That being said, dabs and other concentrates might be the substances to disprove this. Suddenly, overdosing on marijuana seems possible, and this makes marijuana seem dangerous again.

Why dabbing is different than edibles

Dabbing can be enjoyable and safe if you use correct doses. Unfortunately, because dabbing materials are so concentrated, finding the perfect amount is hard for some people. There aren’t tools that measure a proper serving size, and “a tiny amount” means different things to different people.
If you are purchasing a legal wax, shatter, hash or other concentrates, potency levels will be included on the label. Most concentrates used in dabbing are 60-90% cannabinoids. As a reference, legal edibles typically come in serving sizes that are 5-10%. A single gram of concentrate could contain as much as 900mg of cannabinoids in it if it is 90%. In fact, it is so concentrated, that it is nearly impossible to get anything less than 5g in a single dab. Therefore, a “tiny dab” would be close to an entire brownie.
Even dabbing a small amount is much stronger than any other form of marijuana. If you react poorly to edibles, you do not want to start dabbing.

How to safely dab

To ensure you only dab a “tiny amount,” you will need to use tools. Pick a tool that works well for a variety of dabbing substances, and is easy to find when you need it. Pointed tools work great with shatter, while a scooping tool works better for extracts. However, broad-tipped paddle-shaped dabbers tend to work for both. Your tool will help you take the prescribed “tiny amount.”
Another way to ensure you never accidentally overdo it is to portion your concentrate when you first get it. Since you know that a 1 gram 90% substance will be 900grams of cannabinoids, break it into nine equal portions. You now have 100g portions to dab from, which is equivalent to a plate with 10 brownies on it. Although you still do not want to consume the entire 100g in one sitting, you may not hurt yourself if you do. You should be able to get 4-5 dabs out of each portion.
If the idea of portioning sounds too cumbersome, consider using pre-portioned vaporizer cartridges. These come pre-measured so that each pull or hit is a proper dose. Many list the total amount of mg in each concentrate, as well as the number of hits/pulls. To figure out your dosage, just divide the total mg by the number of hit/pulls.
When dabbing, you must start small, no matter how much you typically smoke. Everybody processes endocannabinoids differently, so don’t base it off what your friend can consume. You must take it slow and figure out what works for you. Start with the tiniest dab you can feel – micro-dosing is just like wine tasting; it only makes the full glass taste better.

The benefits of dabbing 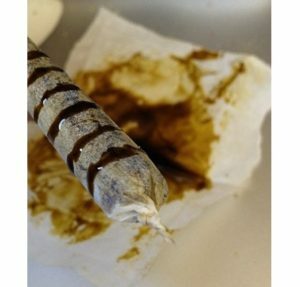 There are plenty of advantages to dabbing, of course. It is becoming more widely used as a medicinal form of marijuana for people who are actually in need, rather than solely a recreational way of experiencing a more intense high. People who suffer from severe, ongoing pain and people who have major bouts of nausea claim that dabbing provides an immediate, highly effective way to relieve themselves of these pains and discomforts. To achieve these same results through ‘normal’ methods of smoking marijuana, patients would need to smoke more weed than is realistic. Smoking for medical patients also wouldn’t have the same immediate effect that dabbing has.

As long as the process of extraction used to create the dabs is done in a professional environment by experienced people, it can be contained and kept completely safe. House fires do not happen when professionals use sophisticated machines and equipment to extract the THC in a safer, more contained way. Other methods for extraction are also available, which alleviate the possibility of an explosion or fire. These methods include using carbon dioxide or ice water.

The fact of the matter is that the safe creation and consumption of dabs requires more research and understanding. The marijuana industry is a growing one, and new technologies and methods of consumption are bound to continue popping up until the process is perfected. Presumably these concentrates will be soon sold legally, therefore lessening the need to do it at home and risk the explosions. Dabbing is one of many options that plenty of people find to be useful, and it may even increase the quality of life when used for its medicinal purposes. Marijuana concentrates are the future, and it is inevitably going to become more sophisticated and more widely accepted.

BACK TO TOP
11 Comments