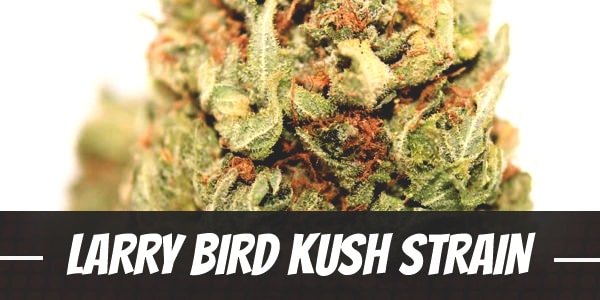 Larry Bird Kush wows the crowd with its off-the-roof THC levels of 24% to 26%. Upon consumption, it delivers a stellar head high that instantly improves the mood within minutes. It leaves users feeling upbeat, motivated, and energized for work. Complementing it is a calming physical buzz that relaxes users while simultaneously removing aches and pains all over the body.

Its earthy and minty flavors are rooted in Thin Mint Girl Scout Cookies’ batter. From it, too, Larry Bird Kush gained its relaxing Indica buzz, deep purple hues, and impressive trichome production. A dash of Sunset Sherbet was added to the mix for a sweeter smoke as well as an elevated, sensational high.

Fun fact, it is named after the basketball legend Larry Bird. He is considered to be one of the best pure shooters of all time. He also helped the Boston Celtics land a spot to three different NBA championships during the 1980s, validating his induction into the Basketball Hall of Fame in 1998.

Our + Name of the Strain + Strain Review

Larry Bird Kush delivers an uplifting head high that keeps users feeling upbeat. It could be an excellent alternative to one’s usual cup of coffee in the morning. This is because, apart from enhancing the mood, it also delivers an invigorating rush of energy.

Casual users benefit the most from its enlivening effects. It refreshes the mind, creates a pathway for thoughts, and inspires a surge in creativity. Along with the improved outlook and newfound motivation, one can work on tasks for hours without losing concentration.

Eventually, the initial buzz of energy turns into a tingling sensation that passes through the back of the neck as it makes its way down the lower extremities. It soothes each muscle, kneading it free of tension like a masseuse. The physical tranquility is intense enough to put users into a state of relaxation, but mellow enough to not lead one astray from the day’s plans.

No doubt, the best time to use Larry Bird Kush is during the day. It provides the needed vitality to power through the day. Using it at night is possible too since the Sativa-like high eventually turns into a deep relaxation.

Larry Bird Kush has a rich, grape aroma with sweet undertones that complement its overall fragrance. Crushing and combusting the buds intensifies its tanginess but also brings out an earthy floral with hints of mint.

Immediately after the first toke, Larry Bird Kush catches the attention of users with its thick earthy smoke and floral notes. It eventually develops sweet but tangy notes from its grape overtones. Enhancing the overall experience is its minty aftertaste.

There is no escaping Larry Bird Kush’s dry spell. As such, users will have to brace for the cottonmouth and some mild irritation in the eyes. It is rarely a cause for concern, but users may want to down a tall glass of water as it tends to last for hours.

Larry Bird Kush’s up to 1% CBD as well as potent THC levels provide quick relief to users in need. It has an uplifting head high that instills a sense of calm, eliminating the overwhelming dread and anxiety that often come with chronic stress from day-to-day work. In its place, there is a relaxing invigoration that encourages the mind to take a break.

Long-sufferers of depression and PTSD may also find comfort in Larry Bird Kush. In enhancing the mood and clearing the mind, it stabilizes feelings like despair and hopelessness. Users may also find that the newfound zest in life fights off apathy.

Among its best attributes is its ability to relieve pain. Its powerful body buzz works as a natural analgesic and anti-inflammatory that manages symptoms of arthritis, joint pains, and stomachaches among others. And, compared to OTC painkillers, it does not produce side effects like nausea.

In fact, it aids in relieving various gastrointestinal issues. It soothes the stomach, reduces turbulence in the gastrointestinal tract, and prevents vomiting. Additionally, it entices the appetite. As such, cancer patients could use the strain after a chemotherapy session to combat its nauseating side effects.

Larry Bird Kush’s effects are typically associated with Sativas. But its growth profile showcases its Indica genetics very well. It tends to stay short, rarely going beyond 3 feet when cultivated indoors. Outdoors, the most it can stretch is around 6 feet, but it usually stays under that.

Apart from its height, other influences include a thick stalk, broad leaves, and impressive immunity to many common pests and diseases. It is also easy to grow, making it excellent for beginners and interested users who would like to exercise their green thumbs. The strain not only offers a robust and adaptable structure, but also vigorous production of buds.

Experienced breeders can apply advanced growing techniques like the Screen or Sea of Green depending on its conditions. Either way, both will shorten the vegetative phase without affecting yields.

Lowering the temperatures as it enters the flowering period will add bag appeal. It brings out the distinct purple hues of its Indica heritage. The same goes for manicuring the buds. Be careful of removing tiny sugar leaves though. It contains a dusting of resin and trichome which contribute to its potency.

Larry Bird Kush has a short flowering period that lasts approximately 8 to 10 weeks. Upon harvest, it produces anywhere between 19 to 27 ounces of buds per square meter.

Flowers are usually ready for picking around the early days of October up to the second or third week. With which, growers can then expect a bountiful 26 ounces of buds per plant.

What is the Larry Bird Kush strain yield?

How much THC does Larry Bird Kush have?

What are the origins of the Larry Bird Kush strain?

Have you ever smoked or grown your own Larry Bird Kush? Please let me know what you think about this marijuana strain in the comments below.