Marijuana In The Body

Home › Medical › Marijuana In The Body

In the early 1990s, researchers discovered that cannabinoids resemble a chemical that occurs naturally in the human brain, and that marijuana’s effects are actually produced by biological mechanisms affected by a natural chemical. Dr. William Devane found this chemical (“anandamide”) in 1992. Devane’s colleague, Dr. Raphael Mechoulam, gave the chemical its name “anandamide” because of its etymological similarity to the Sanskrit word for “bliss.” 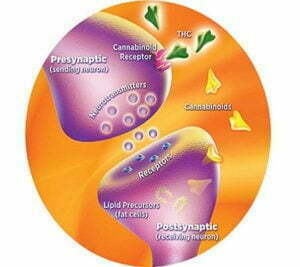 In the brain and nervous systems, you’ll find several different structures of biological mechanisms referred to as receptor systems. Receptors (wiki) are sites that only react to specific chemicals and will produce specific reactions. These chemicals are called neurotransmitters and they produce fluid and massive chain reactions throughout the various networks in the brain and nervous systems to facilitate communication between such networks. For the most part, drugs produce their effects by blocking or activating the processes of these specific systems. For instance, barbiturates have a nonspecific effect on chloride ion channels that increases the activity of a neurotransmitter called GABA. Increasing GABA activity has a marked sedative effect. Benzodiazepines, like Valium, have a specific effect on receptor sites that increase GABA activity. 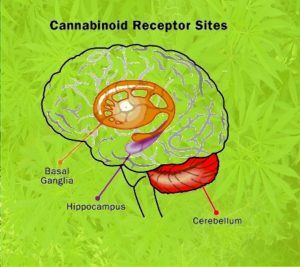 Prior to the discovery of a cannabinoid receptor system at the beginning of the 1990s, some scientists hypothesized that marijuana produced its intended effects through nonspecific action a la barbiturates. Nonspecific effects tend to be broader and more dangerous than effects that are produced directly at the receptor site.

Indeed, marijuana’s effects are produced by a cannabinoid receptor system comprised of at least two cannabinoid receptor types: CB1 and CB2. You’ll find CB1 receptors mostly in the brain and largely in the hippocampus and cerebral cortex which are responsible for memory and cognition. CB2 receptors are found usually in the arms and legs and in immune tissues (e.g. the spleen and white blood cells). Their concentration in body tissues away from the brain put them in the classification of “peripheral” receptors. Marijuana’s psychoactive effects occur as a result of action on the CB1 receptors. The CB2 receptors, on the other hand, might be involved in other, purely “medicinal” effects like anti-inflammatory action.

Some biological actions linked to cannabinoid receptors include marijuana’s effects on memory, cognition, locomotive function, pain, endocrine actions, and other biological functions and changes. It is also implicated in body temperature reduction, changes in heart rate, suppression of nausea and vomiting, and a decrease in intraocular (eye) pressure. Scientists are aware on some level how the CB1 receptors function, but they ultimately have an incomplete understanding of how cannabinoceptive neurons interact with other neural systems. CB2 was actually discovered later than CB1, and we know considerably less about CB2 than CB1.

Of course, the cannabinoid receptor system in humans did not evolve as a response to marijuana. Immediately after discovering the CB1 and CB2 receptors, researchers knew that cannabinoids already had to exist in the human body to react with those receptors. The internal cannabinoid-related neurotransmitters are called endocannabinoids. 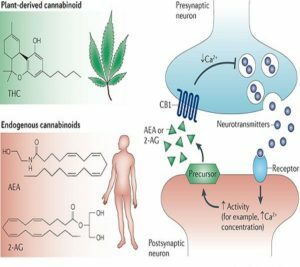 The main endocannabinoid is called anandamide (wiki) which is a word taken from the Sanskrit term for “bliss.” Anandamide deteriorates much faster than THC and also seems to interact less potently with the CB1 receptor. Anandamide and its receptors are found in the brains of all mammals along with many other animals, and are thought to have evolved over the process of hundreds of millions of years. Another endocannabinoid called 2-AG (2-arachidonylglycerol) was found after the discovery of anandamide, and many scientists believe there could be others.

New studies suggest that the endogenous cannabinoids transmit signals backwards. Nerve signals are normally transmitted forward from synapses to neurons, but cannabinoids work in a retrograde manner sending signals from the neurons back through the synapse.

Understanding the function of the endocannabinoid system is only in its infancy. Various animal studies have suggested that it plays a key role in regulating immunity, inflammation, neurotoxicity, trauma, blood pressure, body temperature, appetite, gastrointestinal function, analgesia, glaucoma, epilepsy, depression, anxiety, and even bone formation. Dr. Robert Melamede has indicated that the function of the endocannabinoid system is virtually “homeostatic,” or tending to restore balance. Endocannabinoids can usually fine tune the biological responses upwards or downwards in order to maintain healthy and effective function. This also works as a good metaphor for the therapeutic effects of marijuana. 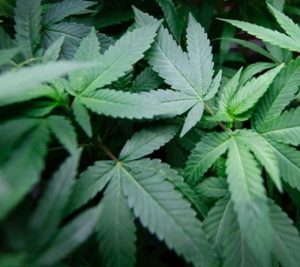 As mentioned previously, heavy use of marijuana over an extended period of time can produce a certain tolerance for the drug in some patients. Tolerance typically develops from consistent exposure to sizable amounts of cannabinoids. As a response, the brain will decrease the number of receptor sites available to bind cannabinoids and produce the desired effect. The receptor sites will return to a natural level once the heavy exposure ends.