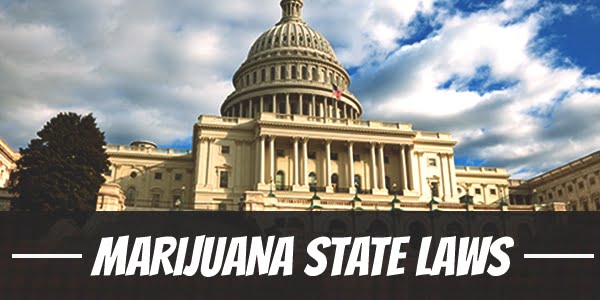 It’s no surprise that the marijuana laws across the United States differ significantly. Even in states where it is legal (such as Colorado), marijuana remains illegal in the eyes of the federal government. So, what are the laws around growing and using marijuana in the US? And what is the history of these laws? More importantly, where are the recreational weed states? Here’s a summary of what you need to know about marijuana laws in the United States.

Under the Controlled Substances Act, there is still no acknowledged difference between marijuana used for medical or for recreational purposes. The laws against marijuana are the same as drugs such as heroin, cocaine, and meth.

Marijuana is also classified the same as dangerous drugs since it is a “Schedule I drug.” This means it is highly addictive and has no medical uses. Because of this, marijuana may not legally be prescribed for medical purposes. Still, since 2014 the federal government has not been pursuing those who use medical marijuana.

Despite the growing wave of support for marijuana legalization (especially on the medical level), the federal government of the United States still has not changed its tune. There is some hope that this could eventually change if some members of Congress get voted out in the November 2020 election. So, if you’re a US citizen, don’t forget to vote!

The History of Marijuana Laws

The truth is, there is a long and differing history surrounding marijuana in the United States. It certainly has not always been considered a dangerous, addictive drug without any medical use in the eyes of the law. In fact, from the 1600s to the late 1800s, it was encouraged to grow as much marijuana as possible. Hemp production was used for many useful things, including clothing, sails, and rope. By the year 1619, Virginia required every farmer to grow cannabis in addition to their crops of choice. In the states of Maryland, Pennsylvania, and Virginia, hemp could legally be used in place of money.

The widespread growing of cannabis continued until the end of the Civil War, at which point numerous imports were used in place of hemp for a variety of products. That wasn’t the end of marijuana in the United States, however, as cannabis became a valuable medicinal ingredient to a variety of medicines. There were no restrictions on its sales.

The first regulation came about in 1906 when cannabis was required to be clearly labeled before being sold over the counter. It wasn’t used recreationally in the United States until the early 1900s when introduced by incoming Mexican immigrants. A growing fear of the new foreigners became associated with a fear of marijuana. It didn’t help that the Great Depression followed shortly after that, adding to more fear and resentment of newcomers and their use of marijuana. Studies were done that linked crime and violence with marijuana, and by the year 1931, most of the country had outlawed the herb.

Hemp became useful again in the 1940s (during World War II) when materials were scarce, and Americans were once again encouraged to grow the plant to help provide much-needed materials for several products. Seeds were even handed out. Even so, that didn’t stop the stricter sentencing laws of the 1950s. Suddenly people who possessed marijuana could be sentenced to jail for years.

Despite all this, the very first state to legalize the medical use of Marijuana was California in 1996. The ball has continued to roll since then. Check the links below to find out more about marijuana laws in your state.

At the time of writing, 29 states, as well as the District of Columbia, allow medical marijuana to be used in some way or another. Laws vary from strictly regulated with few, very specific ailments allowed (such as in Minnesota), to a full allowance of marijuana in a recreational context, but with some restrictions on the amount and number of plants you can possess (such as in Colorado).

Interestingly enough, the legalization of medical marijuana is one of the few big bipartisan issues that exist today. There are numerous Republicans, Democrats, Libertarians, and Independents involved in trying to legalize marijuana on their state levels as well as on the federal level.

While the states are pushing federal action, they haven’t always had the most logical laws on marijuana, however. Several states, perhaps most notably Texas, have a “marijuana tax stamp” law that says that, even though marijuana is illegal, people who do have it must purchase a state-issued stamp that is then placed on the illegal product. Of course, people rarely adhere to such laws, given the fact that they are afraid of such a purchase incriminating themselves. For this reason, the laws are presumably another way of tacking on an additional charge (tax evasion) to those who are caught with the illegal substance.

Additionally, in the state of New York, you can’t be arrested for possessing marijuana if it is in your pocket and is in a small amount. If you outwardly display it, however, by taking it out of your pocket or by smoking it in front of a police officer, then you could be arrested. This has led to a number of police officers demanding that people take marijuana out of their pockets so that they can arrest them for displaying it.

Recreational marijuana was already legalized in 2014. You can only buy weed if you’re 21, and you can only have an ounce in your possession.

Adults age 21 and up can have an ounce of weed or less. Gifts of marijuana must be 28.5 grams or less.

Marijuana can be recreationally enjoyed in Colorado as long as you’re 21 years old. Don’t sell it, though.

As of January 2020, Illinois has legalized the use of marijuana for adults 21 plus. Go Illinois!

You can legally possess 2.5 ounces of recreational marijuana in the state of Maine.

Recreational marijuana is allowed in Massachusetts and has been operational since 2018.

Michigan residents have enjoyed a working recreational program since 2019.

Adults over 21 can have an ounce of recreational marijuana. Don’t share more than an ounce with your friends, or you could be facing a felony.

Oregon has had an operational recreational marijuana program since 2014. You can have as much as an ounce of weed in your possession.

Adults age 21 and up may have an ounce of weed (medical users may carry two ounces at once).

You should not smoke in public, but you can have an ounce of marijuana for recreational uses.

While DC isn’t technically one of the recreational weed states, recreational marijuana is legal here. Everyone can carry as much as two ounces at a time.

Download my free Grow Bible and start growing your own Marijuana seeds!

Marijuana growers can have up to six plants growing at one time in total. They should make sure that, at any one time, there are three or fewer plants that are in their mature (flowering) stage. Make sure you don’t carry more than an ounce of weed with you because otherwise, it’s a misdemeanor.

The largest of the recreational weed states also allows recreational growing of up to 6 plants. Medicinal growers can grow as many as they need, assuming they can prove it’s necessary for their medical condition. In California, you can even give away marijuana without there being any legal penalties. If you’re growing marijuana plants, though, make sure you’re not selling the harvest unless you’re registered as a dispensary.

If you are using marijuana for medical reasons, you can be growing six plants at a time. As is common in many states, only three of these plants may be in their flowering phase at a time, so plan it right. It is conveniently also allowed to gift someone with recreational marijuana, as long as it’s not more than an ounce and as long as you don’t receive money for it.

Although it is not one of the many West Coast recreational weed states, you can still grow on these Islands. Under its medicinal marijuana program, Hawaii’s local patients may grow as many as seven marijuana plants at a time. You don’t need to be too careful about the timing of this growing, as all of the plants can be in their mature stages at the same time without a legal problem.

If you are a registered medical marijuana patient, you may grow as many as five plants at a time in the state of Illinois. Don’t smoke your stuff in public, as that’s not allowed. The good news is that recreational marijuana is allowed in Illinois now.

This New England state has an operational recreational marijuana program, and residents may grow as many as six plants at the same time at home. There are more than 30 dispensaries in the state now, something that stems back to the year 2018.

Michigan is a great state when it comes to home growing marijuana plants. Any resident of this state may grow up to a whopping 12 plants from home and doing so is completely legal! Don’t sell your week though, or even share it with your friends, as this could be a fine or a felony.

Residents of the great state of Montana may grow up to four plants at a mature stage, as well as four plants at the seedling stage, at a time. However, this is only allowed for people who have registered as medical marijuana patients; otherwise, it is not allowed.

Patients who are registered under the medical marijuana program are possibly allowed to grow 12 plants at a time (and they can all be mature at the same time). However, be sure to check into whether this applies to you before planting; it depends on how far away your nearest dispensary is.

As part of their working medicinal marijuana program, New Mexico residents who are registered patients can grow 16 plants or less from home. The key here is that they must only have four plants that are in the flowering phase at the same time.

Under its extensive recreational marijuana program, residents of Oregon can grow four plants at home if it is for recreational purposes. If you happen to be a registered patient under its medicinal program, however, you can have six mature plants growing alongside as many as eighteen seedlings at home.

Marijuana cultivators have a fairly easy time in Rhode Island. As long as you are growing your plants all in the same place and are kept indoors, medicinal growers can have up to 12 plants growing and 12 seedlings at the same time. You must hold a medical marijuana card to do so.

Residents of Vermont may grow marijuana plants recreationally at home. Growing is limited to two mature plants and four plants in their younger stages. This applies only to adults who are 21 years of age or more.

Although the state of Washington does have a working and functional recreational marijuana program, you must be a registered medical marijuana patient in order to grow at home. You can grow up to six plants at a time. Medical patients also have the benefit of being able to carry as much as 3 ounces of weed.

Which state was the first to legalize medical marijuana?

The very first state to legalize the medical use of Marijuana was California in 1996.

In which states is it legal to smoke recreational marijuana?

In which states is it legal to grow marijuana?