Exactly how many strains of marijuana are out there, no one knows. At the very least, there must be thousands of them already through the years. As such, naming strains becomes a challenge. Already, there are strains named after movies, places, and anything else under the sun. It goes without saying that there are also those named after planets such as Mars OG.

Before getting into its origin, first, we want to know what this strain could do. According to users, its Sativa effects are less pronounced compared to others. Of course, that is not surprising as it is an Indica heavy strain. As a result, the mellow buzz it delivers is soon overwhelmed by complete body relaxation. For that reason, Mars OG is a great choice if it consumed at the end of the day.

At the mention of Mars OG, people with active imagination may think of little green Martians. After all, the Nuggets are green color covered by brown-orange hairs. But that is not how its name came to be.

As it turns out, this hybrid belongs to a group of marijuana plants in the planetary family. It is a reference to a distinct way of cultivating it. To induce these plants to produce a higher flower-to-leaf ratio, it is first planted indoor. After which, the grower moves them outdoor during the final phase of their growth.

Using one of these plants, Mars, and crossing it with OG Kush, the original breeder created Mars OG.

As confusing as the vast number of strains are, it is a great thing too. For instance, one could keep a few varieties for use depending on mood or necessity. Thus, it is good to know what Mars OG can and cannot do.

Because its Sativa side is pretty small at around 20%, the onset of its effects is one that is gentle. The best way to describe how one feels is happy contentment. For sure, it is a far cry from the intense uplifting cerebral high of heavy Sativa strains.

On some days, one may feel a little more than content. In that case, then one is bound to feel sociable and giggle at nothing. On the flip side, its Indica side starts to work its magic. As it creeps down to the body, it causes one to feel relaxed. Unlike other Indica heavy strains, it is not likely to cause one to feel lazy. But one word of caution here. Mars OG has an above average potency. As such, consuming too much then all bets are off.

About the only word one could use to describe its fragrance is pungent. Depending on the source, some may come with a little undertone of fruits. Regardless, while its scent may not be spectacular, it is also not bad at all.

Mar OG does not only deliver a gentle high on the mind and the body. It also does so in a smooth way, both during inhalation and exhalation. One distinct flavor that users could detect would be the taste of sugary sweet pine wood. With that, this hybrid is bound to appeal to most cannabis users as far as its taste goes.

We have established that Mars OG delivers wonderful effects. But that comes at a price too. Cannabis users know for a fact that using weed causes dry mouth and eyes. We are certain that breeders have been finding ways to create strains that do not cause them. Unfortunately, that has been unsuccessful. As a result, cannabis users will have to get used to it.

One other concern that may occur is feeling dizzy. In most cases, this is due to low tolerance. Novice and first-timers are more susceptible to this than experienced ones.

When it comes to medical benefits, Mars OG delivers on two conditions where it can help. But in doing so, it also presents a dilemma.

One benefit is in stimulating appetite. As users of this strain know, they do tend to feel hungry. Another benefit is that it also makes users feel sleepy. Here is where the dilemma is. Does one eat or go to sleep? Either way, that it can help those with poor appetite and Insomniacs is an undeniable fact.

Because this plant belongs to those deemed as planetary types, it will take more experience to grow Mars OG.

From what we could gather, cultivating is possible both outdoor and indoor. But to cultivate one that has a higher yield and potency, then it has to be grown indoor first. During the latter part of the vegetative cycle, it moves to an outdoor environment. For this reason, it is best to grow this once one has enough experience.

Indoors
Not much information is available so we could only make an estimate after looking at its lineage. From all indications, Mars OG needs around 8 to 9 weeks before it is ready. By then, the estimated yield per square meter should be around 12 to 16 ounces.

Outdoors
If grown outdoor, harvesting the little Green Martians should fall somewhere between the end of September to early October. By then, each plant should give at least 16 ounces.

Have you ever smoked or grown your own Mars OG? Please let me know what you think about this marijuana strain in the comments below. 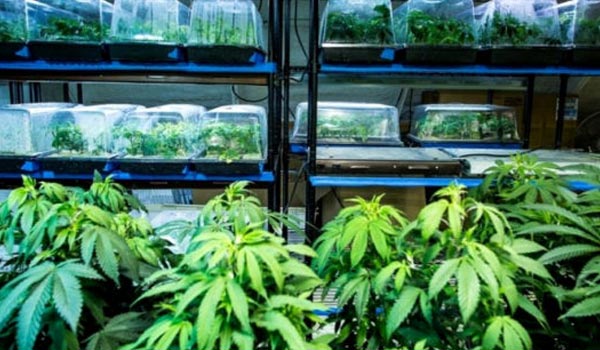 I’ve smoked this strain a number of times and it’s perfect for me, the flavour really cuts through with a great effects. However a friend had a batch that he was selling cheap, the reason being it had seeds (about 5-10 per 7g) not ideal but the flavour and effects were bang on so I had no problem separating the seeds. Usually I would just throw them away but they looked really great, water melon markings, really good quality. I have about 12 In total All germinated within 2 days. Not sure what I’m gonna get but I’m about 10 days in and they’re looking fine – stems a tad bendy tho but nothing to worry about yet