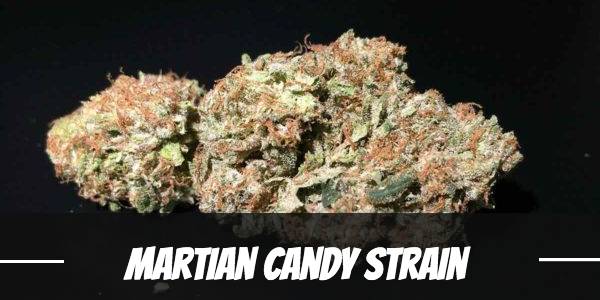 The indica leaning Martian Candy could be categorized as a type of minty treat that users can any time of the day. It delivers a euphoric head high which could double as a source of clarity for casual users. Its body buzz, on the other hand, allows one to move like a well-oiled machine in performing or completing light physical tasks. Eventually, its Indica genes take over and lulls users to bed like a magnet.

It also has merits in the medical marijuana community. Its uplifting onset helps the chronically stressed by increasing the production of happy hormones. As a result, it also helps manage the symptoms of depression and anxiety. To the body, it brings quick relief by inducing a soothing sensation that frees the body of aches and pains.

There is speculation that Martian Candy may have come from OG Kush. This is precisely because it also goes by the name of Martian Candy OG.

Download my free Grow Bible and grow your own Martian Candy!

Martian Candy has a slow-acting high that usually takes around 15 minutes to settle. It starts with a gentle rush of euphoria that elevates the mood, eliminates worries, and instills a sense of calm. It lightens burdens so users can go about the day feeling upbeat.

Casual users will find the mental clarity and positive mindset to be of great use. Not only does it create a space for ideas to ebb and flow, it also increases motivation and sharpens the senses. In this way, users can stay focused while completing tasks.

clarity and positive mindset to be of great use. Not only does it create a space for ideas to ebb and flow, it also increases motivation and sharpens the senses. In this way, users can stay focused while completing tasks.

30 minutes to an hour after the initial onset, a tingling sensation complements the head high. It makes the body limber by releasing tension from the muscles, relieving tightness around the joints. Taking a few extra puffs intensifies the relaxing body high into a sedating buzz. In all likelihood, one will want to look for a comfortable spot to lounge in or roll around. After all, the heaviness that settles into the limbs could lead to a deep, unencumbered slumber.

In the palate, Martian Candy’s minty and spicy flavors take center stage. Enhancing it are floral accents and herbal overtones that give the buds a rich earthy taste. On the exhale, it leaves a woody aftertaste.

Apart from the usual dry eyes and cottonmouth, users can also expect the strain to trigger mild anxiety or a subtle feeling of paranoia. Usually, the keen awareness toward one’s surroundings is the result of overconsumption. Toking in moderation, as well as pacing the dosage, will keep the experience pleasant.

Presumably, Martian Candy was made for the recreational marijuana community. However, its uplifting head buzz and soothing body sensation is multi-purpose.

Its euphoric high provides comfort to long sufferers of depression, anxiety, and PTSD by temporarily stabilizing turbulent emotions such as overwhelming feelings of hopelessness and despair. In its place, there is an innate sense of happiness that not only enhances the mood but also improves confidence as well. At the same time, it manages symptoms of chronic stress such as tiredness and mental exhaustion.

A natural analgesic and anti-inflammatory, Martian Candy relieves a wide variety of aches and pains. It is particularly effective against common issues like arthritis, joint pains, headaches, stomach aches, fatigue as well as inflammations. Meanwhile, its muscle-relaxing properties prevent contractions in the muscles that could lead to spasms and cramps.

It has a sedating comedown that lulls users to bed. The freedom from mental and physical inhibition also allows people with insomnia to fall asleep within minutes and sleep soundly too.

Martian Candy is a great beginner’s strain. It is easy to grow and will yield high regardless of its environment. As such, first time growers need not spend money on expensive fixtures to improve its performance. In fact, one could opt to cultivate it beside a window or in a garden.s

With that said, growers may also invest in life-support equipment that will make adjusting important factors like temperature and humidity easier. For instance, one could place small fans to reduce heat that could dehydrate the plant. A proficient ventilation system is also important in preventing the development of humidity-related problems like mold and mildew.

Lighting is essential when cultivating Martian Candy. Indoors, dedicated tents or small growing needs may require higher intensity lights. This is because the plant requires more light energy to produce buds during the flowering period. Outdoor growers, on the other hand, need not worry as the sun provides all the light needs that the plant requires.

The Indica-leaning plant performs best in the Sea of Green setup. It maximizes its short structure by sowing at least four seeds in a single square meter. The non-invasive method also gently coaxes the main colas toward the light and shortens the vegetative phase without affecting yields.

It takes Martian Candy 7 to 9 weeks to fully flower. Upon maturity, it produces between 10 to 12 ounces of buds per square meter.

In the northern hemisphere, growers can expect Martian Candy to blossom between the last week of September to the middle of October. It yields high, promising at least 12 ounces of buds per plant by chop down.

What is the Martian Candy strain yield?

Martian Candy yields 10 to 12 ounces per square meter indoors and 12 ounces or more per plant outdoors.

How much THC does Martian Candy have?

What are the origins of the Martian Candy strain?

Its exact origins are unknown, but there is speculation that it actually came from the OG Kush strain.

Have you ever smoked or grown your own Martian Candy? Please let me know what you think about this marijuana strain in the comments below.