Joints (marijuana cigarettes) are likely the most common way that people smoke marijuana. They are easy to use and carry, they leave no paraphernalia trail, and can be shared relatively easily. Many people also receive oral satisfaction from toking on a joint in the same way tobacco lovers enjoy smoking a cigarette.

Prior to being rolled into a joint, the marijuana must be broken into small pieces so that it can be evenly distributed. This can be done with scissors or with economical, hand-held herb grinders (for processing sinsemilla).

Users can roll joints using a hand-rolling machine or just their hands. Many joint are rolled in different ways but perhaps the two most common of those are the American joint and the Dutch spliff. Machine rollers are usually reserved for those who have difficulty rolling by hand. These can be found in some smoke shops. Joints come in many sizes and are smoked a lot like a tobacco cigarette. The smoker draws the air through the joint so that the airtstream picks up the smoke and delivers the desired effects. 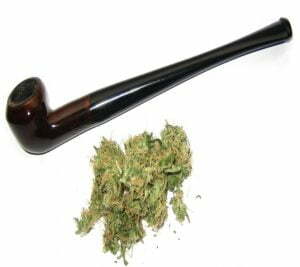 In recent years, pipes have grown in popularity and many people now prefer them to joints. This shift can be seen for many different reasons. For instance, pipes require no paper or glue and, thus, the smoke contains few impurities. In addition, pipes tend to prevent waste because of their small bowls and lack of sidestream smoke. Pipes also avoid the waste associated to the natural limitations of bud length and the human ability to withstand burning fingers.

Pipes come in countless designs, from the most basic implements to true works of art. It doesn’t matter how stylish the pipe is, though. Indeed, any good pipe should have an easy draw, be comfortable to use, and be simple to clean.

Materials are generally just a matter of personal preference as no studies specifically checking residues from heated pipes have been conducted. It’s generally agreed that glass, ceramic, stainless steel, and brass are inert and won’t damage you in any terrible way. Burning wood might produce some toxic fumes, but hardwoods require greater heats than those found in the bowl to start smoldering. Steer clear of plastic pipes. Regardless of the producer’s claims, plastic is more appropriate for blowing bubbles than holding hot coals. 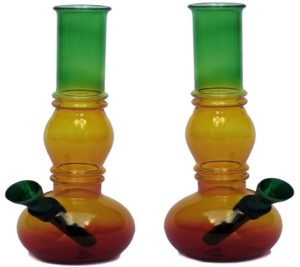 As the name indicates, waterpipes work by drawing the cannabis smoke through a reservoir of water. This cools the smoke and removes any and all particles from it which, in turn, makes the draw smoother. Just like their non-hydro predecessors, waterpipes come in a variety of different styles and designs.

Many pipes have a bowl on top of a stem that culminates below the waterline. The air tube is situated above the water. When you draw on that tube, air is pulled through the bowl, the stem, and the water, so that the water filters the smoke. Smaller bubbles and longer water tubes correlate to better filtering capacity.

A bong is a specialized type of waterline with a large chamber in which the smoke is suspended prior to being inhaled and a carburetor hole not unlike those on a few regular pipes. When the carburetor is released, a large quantity of smoke can be inhaled much faster.

Many individuals enjoy using waterpipes because of the cooler, smoother smoke, but there’s really no evidence that they are in any way healthier for the lungs. One issue with that assumption is that waterpipes usually absorb even more THC than they do carcinogenic compounds. That means that water pipes allow even more harmful smoke toxins to enter the lungs because it takes longer for users to get an adequate amount of THC.

A smoking device study, sponsored by California NORML and MAPS (the Multidisciplinary Association for Psychedelic Studies), discovered that waterpipes absorb more cannabinoids than carcinogenic tars (Gieringer). Thus, to obtain an effective dose of THC, smokers end up having to take in around 30% more tars from a waterpipe than from an unfiltered joint. More thorough water filtration correlates to a lower proportion of THC to total tars and the greater the quantity of THC wasted by pipe water absorption.

Nevertheless, the study didn’t inspect the vapor phase of the smoke, which contains numerous toxic gases like carbon monoxide, aldehydes, phenols, and hydrogen cyanide. Some of these gases are actually quite water soluble, and are therefore likely to be screened out by waterpipes. If that is true, waterpipes could actually have significant health benefits. Of course, more research is required to determine whether the effects of waterpipes are balanced, counterproductive, or helpful. 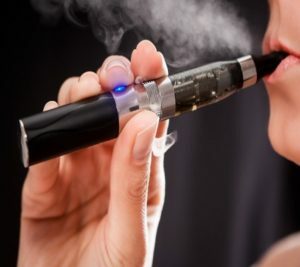 Easily the best option when it comes to avoiding toxic smoke is the vaporizer. These devices heat marijuana to a temperature below the point of combustion—around 356 to 392*F and 180 to 200*C—where the medically active components of the resin evaporate without the toxic damage from smoke or burning. Vapor is then inhaled in smooth, clean, and effective dosages of cannabinoids. This process is viable because the medically beneficial cannabinoids and terpenes can be found in the resin on the exterior of the leaf trichomes, and then these components vaporize below the ignition point of the plant matter. After vaporization, the leftover marijuana is dried and crunchy, but still retains its basic shape with a greenish-brown hue. By contrast, combusted marijuana simply disintegrates into smoldering black and gray ashes.

Vaporization technology has progressed by leaps and bounds since the first edition of this book was published a decade ago. At the time, the technology was still in development phase and commercial models weren’t accessible or readily available. But, as you may have noticed, research has confirmed the effectiveness of vaporizers, and many models have reached the market.

A study sponsored by California NORML and MAPS (Gieringer) showed that a vaporizer called the M-1 Volatizer was found to efficiently deliver THC while entirely eliminating three known toxic hydrocarbons—benzene, toluene, and naphthalene—from the vapor content. Although the study did not test for many other chemicals, it did show substantially reduced carbon monoxide emissions. The M-1 consisted of an electric heater designed to fit over a pipe bowl and then radiate heat downward into the sample. This is definitely not the best design because it often overheats the surface nearest to the heat and under-heat the lower layers.

A comprehensive follow-up study was carried out using a much more advanced vaporization device—the Volcano—manufactured by Storz & Bickel of Tuttlingen, Germany (Gieringer). In the Volcano, you’ll find an automatic temperature control, an air blower to facilitate even heating distribution of the sample, and a vapor collection balloon. The study showed that the Volcano device emitted vapors comprised overwhelmingly by THC. The smoke from combusted marijuana contained at least 100 other chemicals including carcinogenic polycyclic aromatic hydrocarbons.

Dr. Donald Abrams at the University of California at San Francisco then tested the Volcano in human subjects (Abrams, et al). The study investigated the amount of THC delivered directly to the bloodstream through both vaporization and smoking. The Volcano was shown to deliver a consistent dosage of THC to the subjects with somewhat greater efficiency than smoked marijuana. The fact that some THC is destroyed during combustion can account for the Volcano’s increased efficiency. Abrams’ study also revealed lower levels of carbon monoxide gas in subjects who used the vaporizer. It essentially legitimizes vaporizers in medical research and potentially sets the stage for the medicinal use of vaporizers in the future.

Many different kinds of vaporizers are currently available on the market. Paraphernalia laws still prohibit devices specifically designed to administer marijuana, but they are legally sold as “herbal vaporizers” (vaporization does work on many other medicinal herbs along with tobacco). A brief web query will bring up a whole host of devices that will run buyers from $20 to $500. The Volcano is sort of like the Rolls Royce of vaporizers and has been the only vaporizer tested in medical studies. Of course, you can buy relatively inexpensive, portable, hand-held glass vaporization tubes that require you to stuff them with marijuana and heat them externally with a cigarette lighter. Unfortunately, this design provides for a significant amount of flaws in administration since the marijuana is often either burnt by too much heat or left un-vaporized by too little heat.

Still, controllable heat is one of the most important aspects to consider when shopping for vaporizers. Try to avoid models that use direct contact to heat the sample as this can often overheat marijuana closest to the source and can under-heat the marijuana farthest from the source. Many early, rudimentary and homemade designs featured this same flaw in which they relied heavily on hot plates for their heat. The most reliable way to obtain evenly distributed heating is to force heated air through the sample using a blower.

Many vaporizers also feature automatic temperature control which makes it easier on you to produce good results.

One last thing you should consider is convenience and portability. The Volcano’s major disadvantage (along with most other vaporizers) is that it relies on an electrical outlet to be powered. Many vaporizer manufacturers are racing to develop good, portable, and rechargeable devices.

How Long Does THC Stay In Your Body?
Bongs, Pipes and Vaporizers – Marijuana Smoking Equipment
12 Comments