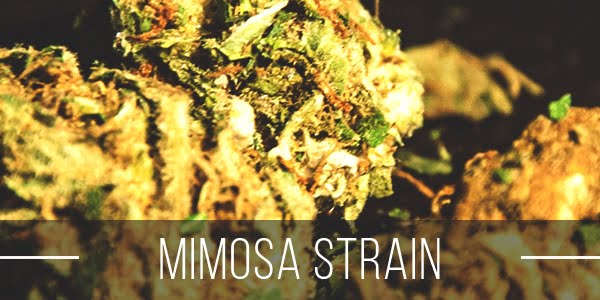 Mimosa is a sativa-dominant hybrid that’s 70% sativa and 30% indica. Its parents are Clementine and Purple Punch, and it’s been growing in popularity since it first appeared in 2017. People enjoy the uplifting effects and cerebral high of this flavorful strain.

For moderate marijuana consumers, it is best to go slow with this one, because the Mimosa strain THC level can vary from 17% to a staggering 30% depending on who grows it and how it’s grown.

Mimosa is a great way to start the day, and it can quickly take the place of your daily cup of coffee.

Information About the Mimosa Strain

As Mimosa’s high sets in, you will feel a gradual burst of energy. If there was any brain fog, it quickly dissipates and is replaced by motivation and focus. Most of the effects are felt in the body rather than in the mind, leaving you euphoric yet relaxed.

Mimosa is a pick-me-up that can chase away sleep and motivate you to get things done. It’s best taken during the day when its uplifting and energy-boosting effects are most useful.

Mimosa has a delicious citrusy aroma. It blends both sweet and sour notes, just like the drink that this cannabis strain is named after. “Fresh earthy herbs” and “woody florals” are commonly used phrases when mimosa strain info is provided by users.

This strain tastes just like it smells, similar to a Mimosa. Berries blend with citrusy, tropical flavors, producing a sweet yet sour effect.

You’ll want to stay hydrated with this strain.  Many people say Mimosa causes severe cottonmouth. This means you should take the necessary precautions, such as hydrating before, during, and after you consume this strain. There’s also dry eyes.

Occasionally, Mimosa induces feelings of anxiety, paranoia or dizziness. This is most likely brought on by taking too much, which is easy to do since it carries quite a punch in terms of its THC content. Proceeding with caution and taking smaller doses might go a long way in warding off this side effect.

Mimosa is an energizing weed strain that also promotes focus, so you could lie awake in your bed lost in your thought until it wears off if you consume this marijuana strain late in the day or at night. It is best to take it as you start your day so that there is time to wear off by the end of your day.

The Mimosa strain genetics of Purple Punch and Clementine produce several terpenes associated with mood and stress relief. Mood disorders, such as depression, are often impacted by this strain, and many say it is quite beneficial.

The therapeutic effects of Mimosa are not limited to uplifting your mood and combating stress, however.  For many, this strain is also an effective pain reliever, making aches and pains melt away in its energetic and analgesic high.

If chronic fatigue has been the bane of your life, Mimosa is a must-try. It provides an energy boost that makes nearly anyone get up and go. A few people say it also helps to reduce nausea.

Mimosa strain seeds are still hard to get hold of, but if you do, feed and nurture them carefully. This strain is still relatively new, so there is little known about its expected yields.  This is not a strain for beginners, and currently, Mimosa strain seeds are not feminized. The Mimosa plant needs lots of nutrients, so be sure to provide plenty of rich soil, or add nutrients such as Bergman’s Plant food. Doing so will improve your chances of producing the highest Mimosa strain THC level.

Download my free Grow Bible and start growing your own Mimosa!

Mimosa is ready to harvest mid to late October.

Mimosa is becoming more popular each day, but it isn’t the easiest to grow. Have you grown it yet? If so, leave your comments below.

FAQ About the Mimosa strain

What is the flowering period of the Mimosa strain?

The Mimosa strain takes about 9 weeks to flower indoors and is ready to harvest mid to late.

How much THC does the Mimosa strain have?

How much CBD does the Mimosa strain have?