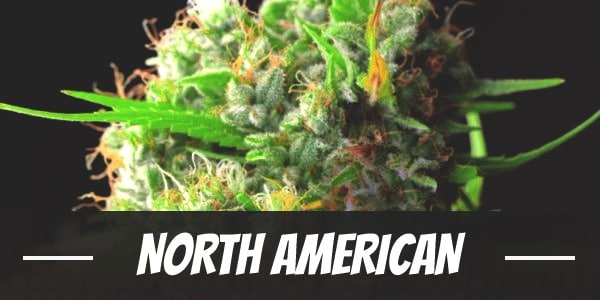 North American Indica is a heavy indica landrace strain that has originated from the North American territories. This strain can make you feel happy and positive, and is best consumed in the late afternoons or evenings, or on weekends when you are all about simply slowing down your roll.

North American Indica refers to the type of strain that grows in its native North American regions, such as the USA and Canada. Due to the soil and climate conditions it is exposed to, this landrace strain tends to turn out to be of 100% indica genetics and qualities, although this may also vary depending on the close proximity to the equator of the strain’s exact origins.

This pure plant typically grows into a short yet bushy plant, with heavy and hardy branches that are specked with endless nugs. North American Indica are very relaxing and uplifting in nature, and can be very enjoyable as an evening night cap, especially when used to induce sleepiness.

North American Indica is a 100% pure indica strain, and its effects are accordingly. This stream is both relaxing that’s all stimulating at the same time, depending on this specific strain itself. These types of strains have the tendency to serve fast as an evening strain, and is commonly consumed at the end of a long and strenuous day.

This pure plant can leave you to feel focused, while feeling calm all over. North American Indica is often used as a sleep aid, as it has effective ways of making you fall asleep faster, and keeping you asleep for longer. This type of strain can also be used on weekends, especially on those days when you have a slow pace schedule.

North American Indica is very popular among users who are always looking for a way to stay uplifted and positive. This strain can make you feel giggly, and you are likely to not be able to control your outbursts of laughter, even in situations that aren’t necessarily funny, as your mood will soar and keep you entertained for hours.

North American Indica is very fragrant without feeling overwhelming, always maintaining its pleasant aroma. This strain smells earthy and like sweet and sour pine, and can also be quite pungent in nature. This plant can also come up as slightly spicy and herbal at times.

North American Indica has the tendency to taste very spicy and earthy on the first inhale, with a distinct woody undertone usually present. This strain can also taste herbal and intense like coffee mixed with a sour pine aftertaste that can easily stick to the inside of your mouth.

North American Indica is usually quite a strong variant that can have some potent side affects on unassuming users. This strain will definitely leave you to feel Thursday, and your mouth and eyes will feel dry and scratchy, so it is recommended to stay hydrated at all times.

This strain can make some users feel dizzy, especially when it is their first time consuming this particular variant. North American Indica may also leave them with a mild headache, often persisting throughout that entire high. This bud ken in rare cases make you feel slightly paranoid, especially when you’re already affected by the other adverse reactions.

North American Indica can be used medicinally, and is often very potent and effective in the treatment of patients who suffer from chronic and severe insomnia. This train can allow patients to go to sleep at their desired time, usually with less delay, allowing them to create healthier sleep patterns for themselves.

This strain is also very effective in the treatment of patients who are looking for a more efficient ways to manage their chronic pain disorders. North American Indica is an ideal choice for the treatment of chronic headaches, back aches, muscle pain as well as severe migraines.

North American Indica can also be used to treat patients who suffer from depression, as it is wildly uplifting and can truly affect the mood. This strain may also be used to combat fatigue, and in cases of cancer patients it has proven to be useful in the treatment of chronic nausea, and can be used daily to reduce its symptoms.

North American Indica likes to be grown and a warm and humid outdoor climate, and can be expected to grow into a short plant with heavy branches covered in trichomes. It’s average THC levels can be found between 17% and 19% on average.

North American Indica grown indoors can yield an estimated 10 ounces per square meter. This bud usually takes around 8 to 9 weeks to finish flowering before it is ready for a harvest.

North American Indica when growing outdoors can produce a yield of around 14 ounces per plan. This strain can be expected to be ready for a harvest around the middle of October.

Have you ever smoked or grown your own North American? Please let me know what you think about this marijuana strain in the comments below.