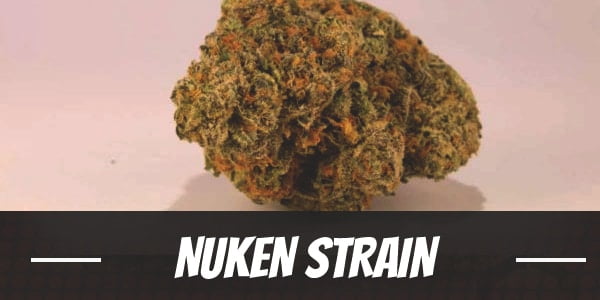 While most people look at marijuana and cringe over the possibility of acquiring unwanted psychedelic effects while forcefully getting drowned in a pungent and odorous stench, they are missing all the other delightful experiences and exotic flavors that the plant can offer.

Contrary to the popular belief of cannabis critics, weed can offer varying intensities in its high and may take on different delightful flavors that can range from fruity to candy-like. Although the infamous pungent taste and skunky aroma of pot are common traits of a highly potent classic strain, it may not always be the case for some strains.

In fact, here is a pretty good example of a cannabis variety with an incredible potency, a well-rounded high and an unexpectedly delicious flavor. This strain is called Nuken. Nuken is like a dangerously potent yet innocently sweet strain. Unlike most weed with more or less the same potency, this tough pot tastes more like candy, giving users an interestingly delicious high.

On top of that, the strain has a solid lineage behind it that only strengthen its credibility. Read on and learn more about this strain. Below is a collection of valuable data about Nuken that prospective users and growers should know about.

Download my free Grow Bible and grow your own Nuken Widow!

The Nuken strain is a relatively classic hybrid that is now gaining popularity throughout the Pacific Northwest and in the states of Oregon and Washington. This Indica-dominant variety is famous for the interesting contrast of its strong yet delicious high.

Users seem to have differing opinions with regards to Nuken’s overall potency. This is mostly due to the fact there has been some noticeable increase in the strain’s THC levels as more tests are conducted. Today, the strain’s THC concentration is believed to be around 13% to 25%. However, some sources would argue that its THC levels can reach as high as 30%

Either way, the strain is currently regarded as a highly potent variety that is certainly not for the faint-hearted. Nuken is Indica-dominant with a concentration ratio of 80:20 and its high is known to be quick and long-lasting.

The onset starts with a cerebral stimulation that leads users into an uplifting euphoria and a happy state of mind. This head buzz often leaves users a little bit too giggly which makes it a good strain choice for social activities. There are also a few reports of the strain sending users into a deep introspection that has the tendency of feeling a bit spacey.

Nonetheless, the strain’s physical high is characterized as a relaxing feeling that is not entirely sedative but may cause users to feel sleepy and find themselves locked on the couch especially in higher doses. This strong Indica effect makes Nuken an ideal evening strain.

Nuken’s smell boasts of sweet marshmallows with a distinct hint of pungent skunk and earthy undertones, making it one of the tastiest highly potent strains available.

While Nuken looks a bit rugged, it has the delicate taste of a freshly baked marshmallow pie with some interesting notes of pine and a skunky tinge upon exhale. Its flavors have always been one of its most sought-after traits.

Just like any cannabis variety, Nuken also has its fair share of adverse reactions. The minimal Sativa concentration in the strain lessens the possibility of psychological effects among users.

To wit, the most common adverse reactions that users experience are dry mouth and dry eyes. There are only a few reported cases that may involve anxiety, dizziness, and headache.

Nuken’s hybrid effects make the strain a well-rounded medicinal alternative for various health conditions. For one, its uplifting cerebral high can be an effective stress reliever for users who need a quick break from a stressful day at work. At the same time, the blissful nature of its mental stimulation can aid patients who are dealing with depression.

Moreover, Nuken’s relaxing body buzz can effectively alleviate pain caused by certain illnesses including muscle spasms. The sedative properties of Nuken, on the other hand, may stimulate sleep which makes it a perfect strain choice for insomniacs.

As any hybrid strain, Nuken may be grown either indoor or outdoor. The strain can thrive well in a SOG growing method using either soil or hydro medium. This could be challenging strain to cultivate, so it is not the best choice for novice growers.

For the experienced growers, it is strongly suggested to always be mindful of humidity levels as Nuken can easily be prone to mold and mildew if its growing environment gets too damp.

Nuken’s indoor cultivation will allow a flowering period of around 7 to 8 weeks. Also, the strain is known to produce heavy yields that can reach per square meter.

There is a varying information about the exact outdoor harvest period of Nuken. However, its average outdoor flowering time should last until late September to mid-October. The yields are just as promising at 20 ounces or more per plant.

What is the Nuken strain yield?

How much THC does Nuken have?

What are the origins of the Nuken strain?

Nuken was created from a mix between Shishkaberry and God Bud.

Have you ever smoked or grown your own Nuken? Please let me know what you think about this marijuana strain in the comments below.