One for the Road: Sweet_quiche’s Trainwreck Grow

Home › Locations › Vermont › One for the Road: Sweet_quiche’s Trainwreck Grow

One for the Road: Sweet_quiche’s Trainwreck Grow:

The reality for marijuana enthusiasts is it is better to grow their buds if circumstances allow them to. Growing marijuana costs less money in the long run while increasing the supply. However, smokers must remind themselves that smoking and cultivating cannabis are two very different things.

Smoking fills one with pleasurable and euphoric feelings. Most of the time, people purchase dried and cured buds ready to be smoked. It goes the other way for growers as frustrations and exhaustion fill them as they come hand in hand with the tedious labor of tending to marijuana plants. Although, the rewards are just exceptional.

Sweet_quiche decided to begin his journey as a marijuana grower by writing an online journal in ILGM’s forums to account the experiences of growing Trainwreck plants. A splendid decision since the whole community was able to reach out to him and interact from the moment of germination up until harvest.

Breeding Mexican and Thai sativas with Afghani indicas produces a sativa-dominant strain that affects the mind and body like that of a fast train. Hence, the name “Trainwreck.”

First, it begins by hitting the mind with a burst of euphoria that aids in awakening creativity in a person. Then, it moves down the body as it relieves migraines, aches, and even arthritis. Other patients use this strain to tone down effects of anxiety, ADD/ADHD, and PTSD.

Two weeks ago, Sweet_quiche decided to jump ship from being a marijuana smoker to being a grower and soaked Trainwreck seeds in a cup. All four have successfully sprouted. 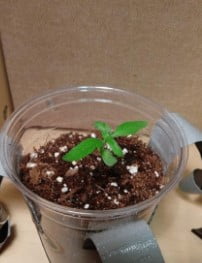 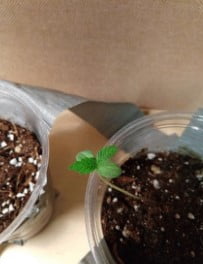 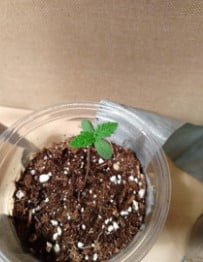 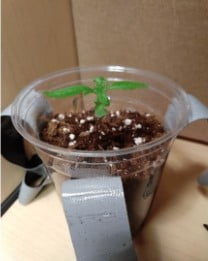 During the day, the sprouts rest by the windowsill where the sun shines indirectly. At night time, Sweet_quiche attaches them to a CFL on the ceiling. This set-up is the reason why the plants need water at least twice a day as it evaporates quicker than usual.

While experienced growers are applauding this system, they are quite skeptical about the use of clear cups. “For tip number 1, I would probably cover your clear cups with something,” Dbrn32 commented. “Roots won’t like the light hitting them.”

Two plants grew three-fingered leaves, but one of them have brown tips filled with spots. While there are a lot of possible reasons, one that stands out for Sweet_quiche is nitrogen burn. Although, others are not too sure about it. 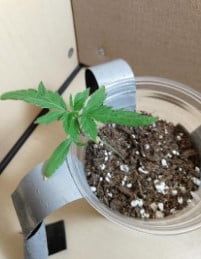 This type of burn happens when nitrogen saturates the soil. However, the element only comes from nutrients, supplements, and fertilizers which the plants have not received yet.

Another lesson that this novice grower learned for the week: how to keep the pH in check. Using a little bit of lemon would lower the pH, and baking soda would bring it higher. These methods were helpful with the plants’ growth and now Sweet_quiche has Trainwrecks with thick, long and stronger stems. 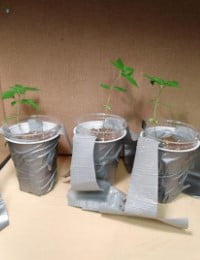 The tallest and biggest plant, christened with the name “Ethel”, is the first one to grow five-fingered leaves. Nonetheless, she grows leaf nodes the slowest among the batch. 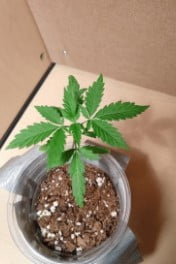 Eight weeks since the Trainwrecks have sprouted and a long time since the last update because Sweet_quiche has been moving houses. For a time, a friend took care of the plants while he moved. During that period, they only received sunlight from a window, which affected their growth.

While the ladies did stretch, it has been very slow with some leaves even dying off. The friend who temporarily took care of the plants must have felt bad for him and gave him another Trainwreck to compensate.

Sweet_quiche still wanted to keep everything stealthy because some people do not approve of this new hobby. He purchased a 2’ x 3’ x 6’ cabinet with a Viparspectra 300-watts LED lights and hopes it would keep the Trainwrecks hidden from plain sight.
H
owever, Sweet_quiche is eager to grow some plants outdoor. Two of the plants are in 5-gallon pots filled with Fox Farm Ocean Forest Potting soil and these would be the ones staying outside. The remaining plants are in 3-gallon pots with the same soil.

When the plants arrived at his home, they were dried up with shriveling leaves. As a remedy, Sweet_quiche had a routine of giving at least a gallon of water more than necessary. In the end, the Trainwrecks look over-watered, droopy, and some leaves even turned yellow. The adopted plant is the palest, but at least she produces more leaves than before. 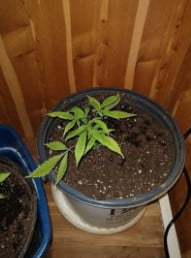 Ethel is not fully recovered yet from receiving barely any light during the time they were at a friends’ house. Top half-inch of the soil is dry, the rest is damp with the buckets feeling heavy. 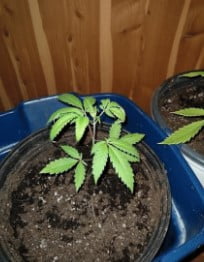 Raustin suggested letting the soil dry out longer than usual to solve the problem. It actually helped and the plants perked up right before Sweet_quiche transferred two Trainwrecks outside.

Sweet_quiche gave the girls a rest before watering again which seemed to help their recovery. The adopted plant and Ethel have certainly bounced back up and have produced more nodes with greener leaves over the days. 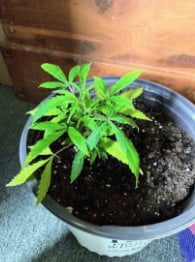 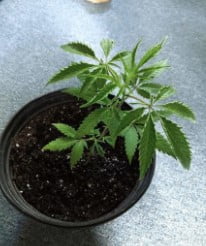 All indoor plants are still adapting to the heat in the cabinet. It might have shocked them as some leaves are curling and turning a little bit yellow. Their grower feeds them two tablespoons of Alaska fertilizer for every gallon of water once a week. He also purchased a micro fan that could hopefully ease the problem. 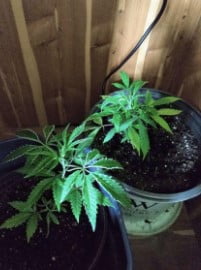 A strange figure appears on some of Ethel’s branches. Sweet_quiche suspects this one is a male/ hermaphrodite as it looks like pollen sacks to him, a clear indicator of the male reproductive system in plants. 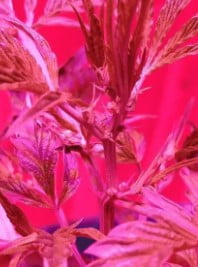 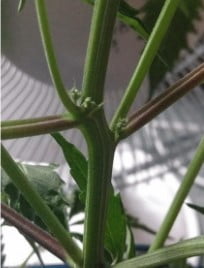 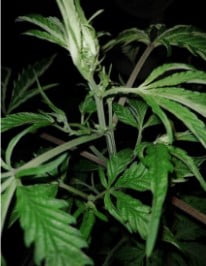 Ethel had to be pulled out of the indoor cabinet before pollens scatter and affect the buds of the other plants. As soon as he was out, Sweet_quiche decided to induce flowering. Easily done by simply switching the light schedule to 12-12. It’s also quite possible that this adopted one is an auto flower since there are already bud sites and pistils appearing. 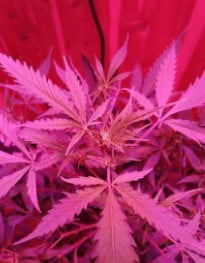 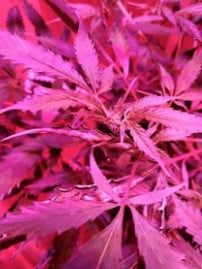 19 days since the beginning of the adopted Trainwreck’s flowering and so far she has been budding up. Not that much but what matters for Sweet_quiche as of now is at least there are buds. 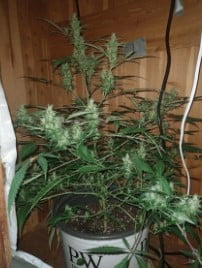 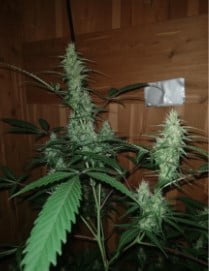 Two weeks later, amber hairs are growing out of the buds, one sign that the buds are nearing ripening for harvest. Actually, there are two marks that growers await before chopping the plants: 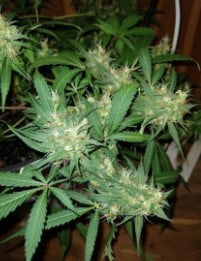 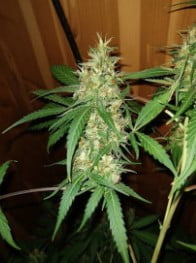 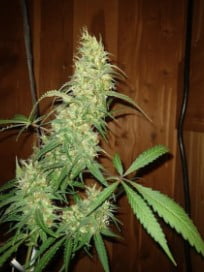 Amber pistils came right on time because Sweet_quiche would attend university soon and would not have anyone to take care of the Trainwrecks for him.

Realizing it’s a bit overdue, Sweet_quiche hurried to chop them down today. 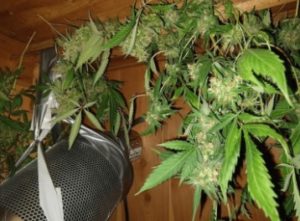 Half an hour later, buds are getting a good trim. 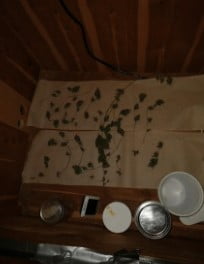 Here are the buds after the sugar leaves are trimmed: 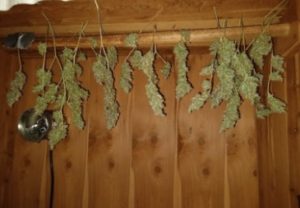 As they hung to dry, these buds look magnificent: 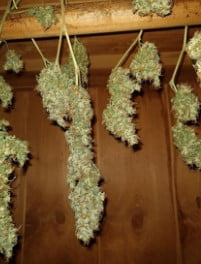 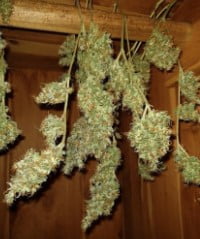 When growing marijuana plants, it is always best to expect the unexpected. There are a lot of things that can happen from germinating the seeds up until the time to harvest the buds. For Sweet_quiche, what started as four plants ended up as one but that did not wear him down.

From this grow, these are the possible things that could occur, especially for beginner grows: