If you are interested in growing the biggest marijuana plants that you possibly can, an outdoor hydroponics setup is certainly for you. Massive marijuana plants produce huge amounts of buds (think more than a pound of weed) at eight feet tall.

If you are growing hydroponically, your marijuana plants can be fed automatically. This is great for growers who need vacation time once in a while, or simply can’t commit to feeding their plants consistently during the entire growing season.

You may also be surprised to learn that the setup costs aren’t outrageous. You could spend $100 for all new equipment, or even less if you use secondhand equipment. Studying a grow journal is the perfect way to understand what you can expect with a new way of growing, so read carefully!

The system is totally recycled, running on discarded aquarium water (20 gallons per week). The TDS levels will remain low throughout the growing cycle, but some nutrients will be added in a few weeks.

Every month the water tank is cleaned out. Every week new water is added as needed. Besides that, the system runs itself and doesn’t need much in the way of hands-on efforts. Nonetheless, lots of marijuana will come out of it.

The timer runs five times a day for fifteen minutes so the plants can get plenty of water.

The temperatures have been fluctuating a lot over the last month, with hot and sunny days as well as cold ones taking turns. There was rain and some hail as well. The plants nonetheless are doing fine.

You can already tell they are going to be huge.

I’ve cleaned the water tank, and the plants are getting some Canna nutrients. The TDS is at 750 (EC 1.5), and the pH level is at 6.3. I used Canna Aqua Vega A & B for the vegetative phase. 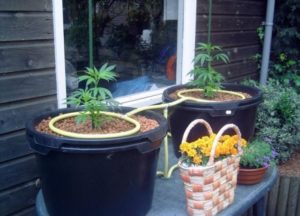 The weather has been nice lately, and the plants are clearly better for it. They are getting lots of sunlight, which means more growth and eventually more buds. We’ll put in a grow net after a few weeks. This will prevent the branches from snapping when the huge buds begin to get too heavy (a great problem to have). 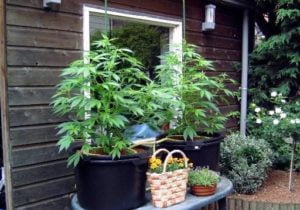 These plants are using three gallons of water per day, and they have already grown to the height of the roof gutter. Because they use so much water, I’m refilling the tank more often. Some nutrients are added once per week. 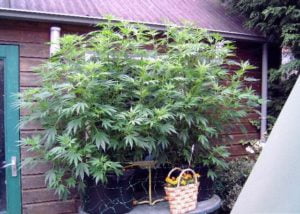 The weather has been great, and the plants are doing really well. They are now taking in approximately five gallons of water every day. A bigger tank is necessary since they are taking in so much water (the 25-gallon tank originally used is not big enough). Pruning and cloning would best be done during this time.

The plants have surpassed the eight-foot mark in terms of height. The weather hasn’t been as nice as August weather usually is (colder than normal), but they are still growing well and using up five gallons of water every day.

You can begin to see some early signs of flowering. The plants are getting Canna Vega A & B still, however. The stems are quite thick, which means they are efficiently transporting water and nutrients throughout the plant.

The plants have surpassed the eight-foot mark in terms of height. The weather hasn’t been as nice as August weather usually is (colder than normal), but they are still growing well and using up five gallons of water every day.

You can begin to see some early signs of flowering. The plants are getting Canna Vega A & B still, however. The stems are quite thick, which means they are efficiently transporting water and nutrients throughout the plant.

The plants finally stopped growing taller and now are growing their buds instead. They are taller than 8 feet and have fully converted to the flowering phase now.

The nutrient regimen has been changed to Canna Flora A & B, which has all the requirements for a healthy flowering phase.

Heavy dew has been forming in the mornings lately, so any amount of wind is good – particularly when the weather is cloudy (to prevent mold). The buds are growing, and the plants are taking in the sun.

The days have been sunny, which means there is more evaporation and therefore a greater consumption of water. The plants are taking in more than six gallons of water per day.

In additional to the Canna Flora, the plants are getting a shot of shooting powder (much like PK 13/14). You can add one sachet per every 25 gallons of water that are in the tank. This increases the TDS to 250, with an EC of 0.5.

Bud rot has afflicted our plants. It was hard to catch because of the massive height of the plants. One branch was absolutely decimated.

The affected branch was removed, and careful inspection of the other branches was done. The other branches appear to be fine, however. Bud rot is a constant risk when the climate is cool and moist.

The buds are getting bigger and bigger, but there have also been more instances of bud rot. If it worsens then the harvest will need to be done right away – better save what we can rather than risking it all.

The plants are back down to absorbing 5 gallons of water per day. They still look happy and healthy.

Today was the harvest day. There were some strong winds last night, causing some damage, and the bud rot was spreading – so the harvest needed to happen now.

Although the buds weren’t as ripe as a grower would prefer, it is enough to smoke plenty of weed for the next year.

The plants are hanging upside down in a shed to dry. There is a small fan aimed just beneath the buds, with a little electric heater preventing nighttime temperatures from getting too low.

There are a wide variety of ways to grow marijuana, and unexpected things will always arise. To make informed decisions and to be best prepared, read lots of different grow journals, from others who have grown marijuana before. Please leave comments or questions below.