Outdoor scrogging can be an excellent way to maximize the yield from your marijuana plants, especially if you want to get a lot of marijuana from just a few plants. Scrogging is an ideal technique for people growing in states where just a few plants (between one and six, for example) are allowed to be grown at one time, or if you only have a certain amount of space.

The term “SCROG” actually comes from “Screen Of Green”. That’s because you put a screen over the plant(s) and then tie all of the growth that comes through to the screen, so it begins growing horizontally. If it grows upwards again (by around 5 inches), then you simply tie it down again.

Some other pruning techniques are often used in combination with scrogging. Topping, for example, works well to widen your plants’ growth, while pinching can help your plant focus on its top, main cola. Read this grow journal for one way outdoor scrogging has worked for me — and could work for you too!

The plant was germinated at the start of April. As of today, it has been outside for a solid two weeks already. I don’t want the neighbors to notice it from how tall it could grow, which is why scrogging will come in handy.

This strain (Sugar Punch) is a sativa-dominant plant, meaning it will have no problem filling up that whole screen. I topped the plant so it will have additional main shoots (rather than just one).

The topping has been successful — I can already see lots of side shoots growing. It’s important for the plant to grow in width rather than height, so I’ve also applied LST (low stress training) techniques. This mostly means I bent the plant gently so I can get the plant to grow lots of colas (which will mean lots of buds).

The stems and leaves all look healthy and good, and there isn’t anything to report in the way of diseases, pests, or leaf damage. Being on top of this by checking it often is important. Your plants can be totally destroyed in a very short time span, especially when they are young. Keep an eye out for snails, rabbits, or deer (believe it or not).

I’ve done a bit more super cropping, topping, and LST over the past several weeks. Super cropping involves squeezing and bending the stem gently (without ripping it or tearing a hole). This helps improve the overall health of the plant.

The plant looks healthy and still has lots it should grow (which is normal for this date). I sprayed the plant with organic pesticide and included some fish mix with the most recent watering.

The plant grew a ton over the past several weeks. There are more than 20 main shoots that are poking through the screen, all of which have been topped. That means we can expect at least 40 main shoots!

These branches growing through the screen will be tied horizontally, creating a single layer of thick green leaves (and lots of buds when that time comes). Because the bottom of the plant has been pinched, all the energy of the plant is focused on its many main shoots.

The plants have been sprayed again to prevent pests and diseases, and the fish mix was added to the last watering.

Nothing really happened, she just keeps growing. Here are some pics…

The branches that have poked through the screen are still tied to it, and the growth continues. The plant looks healthy. No pests and diseases have been found (although the plant is checked often, just in case). There are no nutrient deficiencies or anything — growing marijuana outdoors is easy! 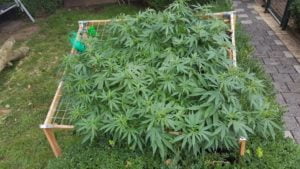 We’re starting to see some of the first flowers and everything looks great. I have changed the nutrient regimen to flowering fertilizer, and the water intake is quite high. It’s important to make sure there’s still plenty of water, especially when the weather is so sunny.

Lots more flowers are starting to appear, and they are beginning to get really huge. The weather is fair and the flowering period has been lasting for just several weeks. Unfortunately, that probably means that the plant will have to be harvested early, but that should be fine.
Her nutrient regiment is the flowering nutrients once a week. It seems to be working well.

Last week, however, a bit of stem rot was discovered. It was lubricated with Vaseline, which takes away its oxygen supply and kills it off.

As of tomorrow, the plant will be in the fifth week of flowering. Some of the plant’s branches broke from some heavy winds, and duct tape wouldn’t work to fix them. They were removed and are now hanging upside down to thoroughly dry.

The chilly nighttime temperatures are causing the buds to turn into a purple color. If the plant lasts another five weeks without any bud rot, it will be perfect.

Some very bad weather combined with mildew and bud rot meant that the plant had to be harvested extremely early. Mildew is okay on its own, but in combination with bud rot, it is impossible to eradicate.

For reference, you can spray your plant with a certain solution to treat mildew. Bud that increases the moisture that is on the plant, which encourages more bud rot to flourish.

Most of the time, a plant growing with the scrogging technique should be a Sativa-dominant strain (since they get taller). Because of their greater size, however, the plant needs additional time to flower — for a cold and rainy climate like mine, indicas are a more reliable plant because they can be harvested before the fall. 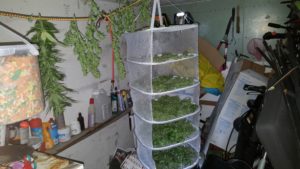 The weed is dry, and there wasn’t as much as I hoped for — just about 11 ounces. While this is plenty, a plant like this can easily get a full pound or more of weed (but it would need to grow for weeks longer). This is the downside of growing outdoors since you can’t control everything.

While it was drying there was more rot, which also reduced the amount of usable weed. It’s good quality, though, and the taste is sweet and not too sharp.

There are a wide variety of ways to grow marijuana, and unexpected things will always arise. To make informed decisions and to be best prepared, read lots of different grow journals, from others who have grown marijuana before. Please leave comments or questions below. 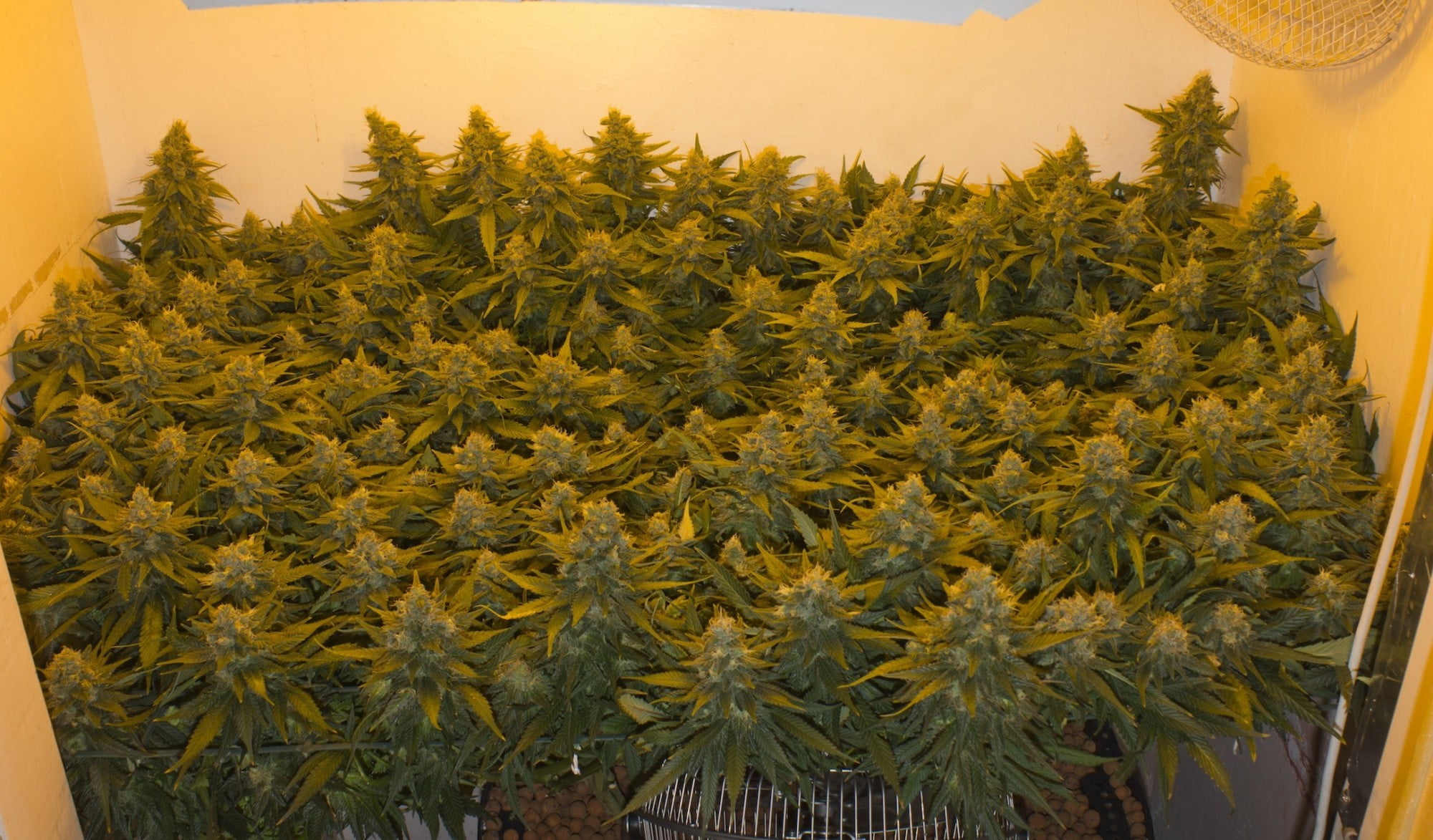