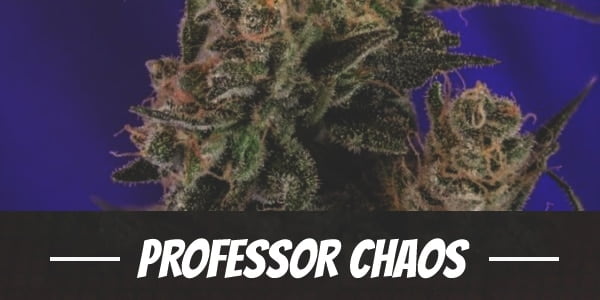 Jack the Ripper is one of the most famous Sativas ever. Since it came out, its rapid onset and energizing effects have taken the marijuana scene by storm. Mad Scientist, on the other hand, is the complete opposite. It is a slow-acting Indica strain that comes delivers a sedating body high. Now, imagine the dynamic combination of the two.

Bred by Homegrown Natural Wonders, Professor Chaos is, in essence, Jack the Ripper but finely tuned for productivity. Apart from the mental clarity it induces, the Indica heritage of the Mad Scientist is very much evident with its analgesic properties. In fact, it is the very reason why it placed 1st overall in the 2011 and 2012 Oregon Medical Cannabis Awards.

As with most Sativas, Professor Chaos has quick and powerful cerebral onset. Drawing in a few puffs, it reinvigorates depleted energy levels and enhances the mood. Not only that, but it also sharpens senses and gives users the ability to focus on tasks at hand.

The mental elevation is followed by a warm fuzzy feeling from the temples extending to the body. Usually, this buzzing sensation takes the edge off of a stressful day. However, it does not outshine the initial head high. Instead, the soothing effects complement it. For this reason, Professor Chaos makes for a great wake-and-bake companion.

Although, one should know that Professor Chaos has THC levels of up to 24%. Tremendously potent, novices and experienced users may feel intimidated. But, so long as it is consumed at a slow pace, its effects are not crippling.

Professor Chaos has an impressionable aroma. A single whiff reveals an exceptionally overpowering apple, which may translate to sour citrus for sensitive noses. For some, it may be a bit too much. Then again, this is only expected as people have different preferences.

Once the buds are crushed or grinded, they release a spicy note of earth. Though diverse, the different scents do fit well together to emit a pleasant enough smell.

Professor Chaos has a pleasant taste, much like real apples but with a hint of berries on the side. Drawn in, the taste of sour citric fruits like lemon and lime become evident. On the exhale, it leaves a spicy aftertaste.

All strains have adverse reactions, and Professor Chaos is no exception. Like most varieties of marijuana, users will get a case of dry eyes and mouths. This isn’t a big deal since most users will be too engaged in the strain’s effects even to notice.

However, the strain may come with some light headache. These side effects often happen to those with low tolerance to THC or those who overindulge.

Professor Chaos has garnered two back to back medical awards. As such, one should already expect that it has multiple medical benefits. For one, its happiness inducing high can relieve stress and comfort those with depression or PTSD.

Aside from the behavioral, Professor Chaos also has effects on the physiological. Much like a painkiller, it alleviates aches and pains. Not only that, but it can also rid people of fatigue and stimulates the appetite.

As a Sativa leaning strain, Professor Chaos is nowhere near as sturdy as an Indica plant. This is largely due to its Sativa heritage. For a successful harvest, the herb would have to be in the expert hands of a seasoned grower. With experience in dealing different kinds of strains, they can easily apply their knowledge of different growing methods such as Screen of Green (SCROG) and Sea of Green (SOG) to optimize the strain. Such cultivators can create the right conditions to trigger any of its four phenotypes.

A tall plant, growers may also want to top its buds early, especially when growing indoors. Combining it with one of the numerous training methods will promote lateral branching. Pruning it will also help save space and keep plants short.

Indoors
Professor Chaos is best grown indoors. In a controlled environment, it is easy to keep an eye on pests and bugs as well as adjust temperatures. With proper care, the plant yields between 8 to 12 ounces per square meter after a flowering period of 8 to 9 weeks.

Outdoors
Outdoors, this Sativa leaning strain thrives in a warm climate. It should flower by the first week of October with yields up to 12 ounces or more per plant during harvest.

Have you ever smoked or grown your own Professor Chaos? Please let me know what you think about this marijuana strain in the comments below.