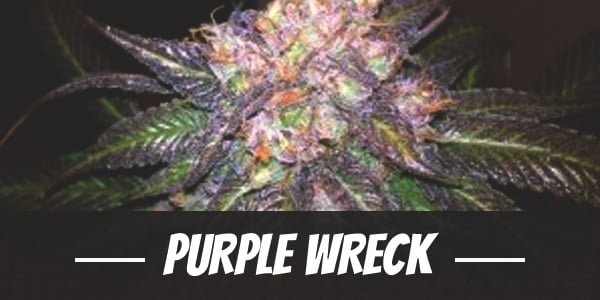 There are obviously thousands of strains available in the market today, each boasting of their individuality. Although it would seem like breeders are creating all these diverse strains just for the fun of it, there are concrete reasons behind it.

Some breeders intentionally breed strains to highlight some of their traits that are particularly more favorable for a particular group of users. Other breeders, on the other hand, may have the goal of creating a strain that can actually alleviate certain health conditions. Either way, it appears that breeders have been quite successful in their ventures over the years.

Their hard work can be seen in how cannabis, in general, have gained the respect and recognition of avid users and the general public respectively. To wit, here is a strain in the name of Purple Wreck that is just one of the many strains out there acknowledged for their pleasant flavors, potent high and their ability to provide symptom relief to users and patients alike.

The following information below will explore more on Purple Wreck’s profile and why the strain has gained the attention of both recreational and medical marijuana users.

DNA Genetics initially developed purple Wreck in Amsterdam. It is the result of crossing the Purple Urkle and Trainwreck strains, thus the name Purple Wreck.

At present, Purple Wreck has earned the respect of the entire cannabis community just like its parent strains. It is mostly popular in Arizona, Colorado, California, and the Pacific Northwest.

First of all, there seems to be quite a disagreement regarding the strain’s accurate THC levels. According to some sources, Purple Wreck has an average THC level of 15% to 18%, making it a moderately potent strain. Other sources, however, would argue that its THC levels can reach as high as 25%. With the recent data in mind, it makes Purple Wreck one of the highly potent strains available.

Nonetheless, users seem to agree on the effects of the type of high that Purple Wreck offers. Many of them would suggest that the strain is better enjoyed when taken in small amounts. That being said, Purple Wreck in small amounts can stimulate happy and creative thoughts that make users feel uplifted and upbeat.

Being an Indica-dominant strain, it also delivers a relaxing experience like no other that frequently lead users into sleepiness. In fact, in larger doses, the strain can quickly promote couch lock with its powerful sedative properties.

There is no better description as to the fragrance of Purple Wreck than a delightful combination of sweet and fruity balanced out by some definite hints of pine and earth. Overall, it has a sweet yet grassy fragrance that is surprisingly pleasant to the senses.

Considering the reputation of its breeder as one that is famous for producing fruit-flavored strains, Purple Wreck is expected to have such characteristic as well. Indeed, It is boasting of the sweet and fruity flavors of blueberry and grapes with some interesting undertones of pine and spice.

As expected, using Purple Wreck may cause some adverse reactions that can range from some mild yet highly possible side effects to those that are less likely to manifest yet are significantly more alarming conditions.

To wit, the most commonly reported adverse reaction from using Purple Wreck is dry mouth followed by milder cases of dry eyes. While these two are not necessarily alarming, users may still need to be careful with their intake.

In fact, larger doses of Purple Wreck can potentially cause paranoia, anxiety, and dizziness especially among users with very low tolerance to high THC contents. For that, beginners need to be extra careful when trying out this variety.

Despite its high THC concentration, Purple Wreck has also become one of the favorite strains of medical marijuana users. The uplifting onset of the strain is indeed an effective stress reliever for users who need a little boost in their mood.

However, most users particularly love the powerful body buzz of Purple Wreck. It happens to be quite effective in relieving pain caused by various health conditions such as muscle spasms. The sedative properties of Purple Wreck can also be beneficial for patients suffering from insomnia.

Purple Wreck may be grown indoor or outdoor and can be very forgiving to novice growers. However, most experienced growers would say that the strain is better off in an indoor cultivation because growing them outdoor would require a tropical or Mediterranean climate.

Prospective growers can choose to cultivate directly on soil or in hydro mediums. The strain can also thrive in a SOG growing method. It is a pretty flexible strain and not to mention the fact that initial purpose of its development was to speed up the growing time of its parent strain, the Purple Urkle.

Indoors
The indoor cultivation of Purple Wreck will take about 8 to 9 weeks and can produce a yield of 14 to 17 ounces per square meter.

Outdoors
Given that the ideal outdoor condition is met, the buds of Purple Wreck should be ready for harvest by late September to early October. The yield is just as abundant at 21 ounces or more per plant.

Have you ever smoked or grown your own Purple Wreck? Please let me know what you think about this marijuana strain in the comments below.