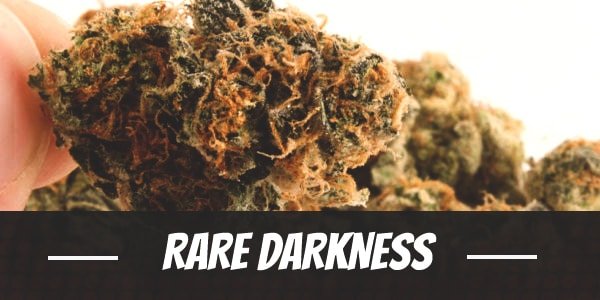 It is not every day that marijuana breeders can develop a strain that it holds precious. Granted that the ones that find its way into the market have exceptional traits, the fact is that from within, there will always be some that are most treasured. One of them is Rare Darkness.

Rare Dankness Seeds, the breeder, used one of their premium strain Rare Dankness No. 1 and paired it with Grape Ape to develop a mostly Indica hybrid that delivers an uplifting and soothing high. While both parents are Indica, they do not necessarily share the same traits.

Rare Dankness No. 1 from the same breeder is a marijuana strain that was chosen for genetic reasons. Aside from its substantial sedative-like properties, it can also give users a cerebral euphoria like no other.

Grape Ape, on the other hand, is an award-winning strain developed by Apothecary Genetics and Barney’s Farm. This Indica dominant hybrid is best at providing its users a carefree relaxation. In fact, it has even received trophies from the Green Cup, Medical Cup, and the High Times Medical Colorado Cup for its excellent effects. Other traits it passed on to Rare Darkness includes its grape aroma and purple leaves that darken as it starts to reach full maturation.

Rare Darkness is not the type of strain used to power up physical activities. And, even if it is a mostly Indica hybrid, the Sativa heritage it retains is most pronounced at the onset. Often, users feel a euphoric rush in the head not too long after smoking it. A nice touch is that it is not at all too intense but can bring one to an upbeat mood. Furthermore, it also helps clear the mind as well as promote creative thoughts.

Like typical Indica, it takes time before it creeps into the body. Once it does though, it is nothing short of bliss. Its body numbing high is potent enough to put one on a spacey high and couch-lock while in deep introspection. At up to 22% THC, Rare Darkness can easily knock out users if one were to smoke too much.

Lost in thoughts while feeling utterly relaxed, most users just fall asleep. Even better, it is waking up the next day feeling refreshed and recharged. If there is anything dark about this strain, it is tuning out everything while sleeping.

Rare Darkness sports a very pronounced grape aroma which captures the attention of most people. However, beneath the overpowering grape scent is the complimentary earthy fragrance with a spicy note. Soon after combusting the nug, its scent becomes more pronounced.

Like its scent, Rare Darkness has a fresh grape flavor blending with the taste of earth. It has an herbal quality with a sweet and spicy hint. Upon exhale, the strain leaves a tangy aftertaste.

A fairly common reaction to smoking marijuana is drying of the mouth and the eyes. Most of the time, these symptoms are ignored because of their mildness. Besides, these are typical with the use of marijuana as experienced users know.

However, some people may end up smoking a little too much. In such cases, Rare Darkness can cause either headaches or dizziness. It may overwhelm some users and cause them to feel a bit anxious.

Rare darkness gives its users an uplifting cerebral high, which can be a big help to those with depression. In uplifting the mood, it helps people cope with emotional issues. By making users feel upbeat, it busts stress away.

Despite its CBD content of 0.1% to 0.5%, Rare Darkness is a great pain reliever. It delivers a sedating body high that not only soothes the muscles but also helps relieve any unwanted tension. Because of its ability to relax the body, users with insomnia can get a good night’s rest after smoking the strain.

Like other plants, Rare Darkness thrives best when it receives a decent amount of sunshine. It grows fast and has an abundant yield especially when cultivated in a warm environment. Moreover, thanks to its predecessor, this plant is quite sturdy. While it may be able to withstand most weather changes, it is best taken inside in case of heavy rain or extreme cold.

On its appearance, it has a deep purple color that makes it easily distinguishable among other strains. Not only that, it has a thick coat of trichomes that makes the bud look like it was coated with sugar.

While growing Rare Darkness, breeders should strive to provide natural elements or apply organic methods to compensate for the artificial environment. A simple start is using soil as it can help the plant reach its full potential and can even maximize its flavors. The strain is likely to produce 10 to 12 ounces of buds per square meter after a flowering period of 8 to 10 weeks.

As with any Indica plant, Rare Darkness flowers as September ends. At times, it may flower at the beginning of October. But, it all depends on the conditions it was grown in. Once ready for harvest, growers can expect 10 ounces or more per plant.

Have you ever smoked or grown your own Rare Darkness? Please let me know what you think about this marijuana strain in the comments below.