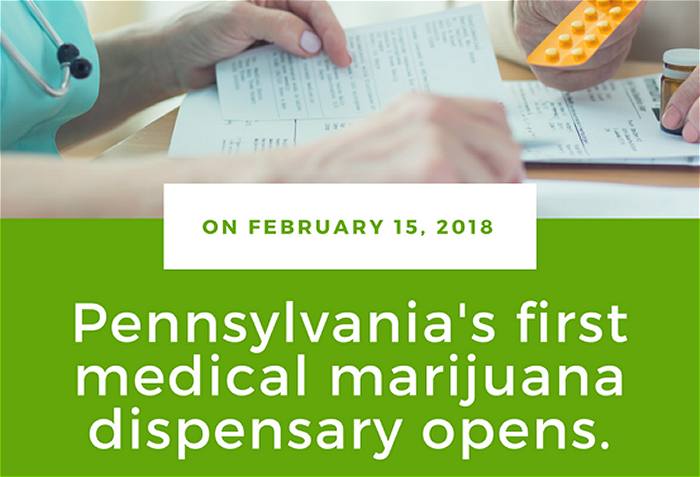 Pennsylvania is going to have its first medical cannabis dispensary operational from Feb 15. The plant for its therapeutic benefits will finally be available for the residents of the Oil State after many months of anticipation.

It’s been nearly two years when the Governor Tom Wolf ratified the state’s medical cannabis program. Pennsylvania did a wise thing by not rushing into implementing its MMJ program. Instead, detailed planning and groundwork has been done by the government to ensure that the program gets materialized without any glitches. The administration has made it certain that all the necessary regulations and rules are in place before the MMJ program becomes effective.

Apart from establishing a regulatory infrastructure, the state administration has also approved a list of physicians who will be eligible to recommend the use of medical cannabis. They have also comprehensively worked on the list of qualifying condition for which medical marijuana can be prescribed. The final draft of the program mentions 17 critical medical conditions that meet the requirements for the administration of MMJ.

Since the governor signed the MMJ bill, around 17,000 patients have been applied for the program out of which more than 4,000 have been given approval. Moreover, 20 cultivators and dispensaries have received approval to run MMJ operations.

As per Pennsylvania’s MMJ program, patients will be allowed to consume MMJ through oils, lotions, tinctures and vaporizers. Cannabis flowers and edibles will remain prohibited and patients can’t purchase marijuana seeds as well.

The first medical marijuana dispensary, Cresco Yeltrah, is opening its doors today, while five other establishments will go operational in next two days. Registered patients have been told to contact the facilities in advance to know whether they will require an appointment and slot before buying any MMJ product. The measure has been taken up so that the first few days of MMJ sales won’t experience any pandemonium.

Even though Feb 15 is termed as the first official day of legalized MMJ sales, but there is a dispensary that has been open for nearly a month now. Keystone Canna Remedies, an MMJ dispensary in the city of Bethlehem, PA, opened his doors in January but only for MMJ awareness workshops and for consultation for registered patients. Now, the dispensary is going to make MMJ sales from Feb 16.

These are testing times for the states moving forward with their cannabis reforms following the annulment of Cole Memo. It’s a bill introduced by the previous federal administration to limit its involvement in states’ business regarding cannabis. However, Pennsylvania’s MMJ program is in good hands because Gov. Tom has always been a strong advocate of the therapeutic use of MMJ.

MMJ operators are also confident that they will not get affected by federal shenanigans. One owner even thinks that the beneficial consequences of the state’s MMJ program perhaps alter the views about the plant at the National level. We have to wait and see how Pennsylvania’s MMJ program rolls out.