How to Grow the Best Sinsemilla Weed

Home › Growing › How to Grow the Best Sinsemilla Weed 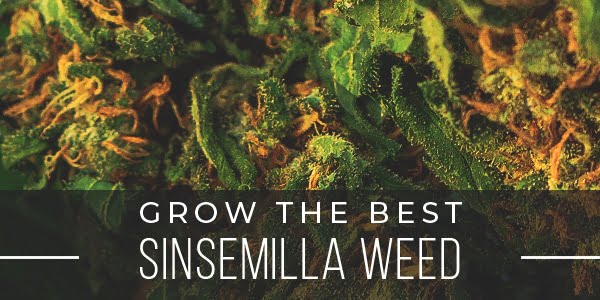 Are you looking for highly potent weed with very few seeds?  If so, you need to try sinsemilla. No, it’s not a specific strain of marijuana. It is a specific type of growing that produces seedless marijuana.

The word sinsemilla is a combination of two different Spanish words: ‘Sin’ (without) and ‘Semilla’ (seed). The term became popular in the 1970s as a technique used by indoor growers on female cannabis plants. The technique ensures that the flowers of female plants do not come in contact with male plant pollen. This keeps the female plants from developing seeds.

Instead of seeds, these unfertilized females develop thicker branches and larger, resinous flower buds. It is also an effective way of boosting THC.  In fact, sinsemilla marijuana produces THC that is 2 to 10 times higher than fertilized cannabis.

Download my free Grow Bible and learn how to grow your own sinsemilla weed!

What is a Sinsemilla Plant?

There is no such thing. Sinsemilla refers to a specific characteristic of the flowers of a marijuana plant. However, many people mistakenly use the term to refer to the plant or weed in general. Technically, marijuana (weed) can include other parts of the plant, so you could say sinsemilla weed and plants don’t exist.  However, since most people are only familiar with using the flowers of a marijuana plant, incorrectly thinking about sinsemilla as a quality of the plant instead of the flowers isn’t that big of a deal.

Sinsemilla means a plant has never been pollinated. Pollination is great for passing on traits and creating more plants in the future; however, it can also be a bad thing, and here’s why:

Pollination causes marijuana plants to use their energy to create numerous seeds for reproduction instead of quality, potent flowers.

For many marijuana growers, the ultimate goal is quality. You want potent trichomes, visible resins, high THC and, of course, great taste and aroma.

The sinsemilla growing technique increases your chances of cultivating just that.

Once again, you can prevent the production of seeds by preventing pollination. Males pollinate females, so you’d want to avoid growing males.

The easiest way to avoid males is by planting feminized seeds indoors. These seeds will only produce female plants. You could also plant feminized seeds outdoors, but guaranteeing your females won’t get fertilized is tricky, since male plants can contaminate and pollinate females up to an entire mile away. It is much easier to stop male plants from pollinating females in a closed environment.

Not sure if you have a male plant in your garden? Read this detailed guide on plant reproduction to learn how to identify the sex of your plants.

Growing sinsemilla weed takes more effort, but in the end, it is worth it. Plus, when combined with strong genetics, you can produce highly potent, flavorful weed.  Here are some feminized seeds that I recommend for sinsemilla growing.

Gorilla Glue Autoflower by ILGM seeds require very little maintenance to produce compact plants with potent buds. The 50/50 Indica Sativa hybrid can produce up to 26% THC levels. Plus, because the plants are so compact, they are perfect for small spaces. Since it is an autoflowering plant, it will grow fast; however, this autoflower isn’t lacking on the THC. It also resists most of the common mildews and molds, making it perfect for first-time sinsemilla growers.

Gorilla Glue Autoflower is a mixture of Chocolate Diesel and Chem’s Sister that delivers an uplifted yet relaxed mood.

MK Ultra seeds grow into plants that produce extremely powerful couch-lock effects combined with a cerebral high. With THC levels up to 21%, this 50/50 hybrid is perfect for days when you have nothing better to do but enjoy your high. This easy-to-grow award-winning strain produces average-sized plants that flower quickly.

MK Ultra is a cross between G-13 and OG Kush.

LA Confidential seeds produce Indica dominant hybrid cannabis plants with THC levels that can reach 25%. This strain is an easy-to-grow mixture of OG LA Affie and Afghani super strains. Although it’s one of the world’s simplest strains to grow, it does best with the SCROG (screen of green) technique. Users can expect to experience a mind-soothing, body-calming type of euphoria, and its often used at raves.

How Common is Sinsemilla?

During the 1970s, most marijuana had seeds. Nowadays, it is hard to find anything but seedless marijuana. To produce marijuana without seeds most growers either grow sinsemilla marijuana or go through the painstaking process of removing the seeds before they sell their harvest.

Even if you are consuming marijuana without seeds, that doesn’t mean it is sinsemilla. Once again, the difference is the growing technique. Sinsemilla marijuana is grown without seeds and, as a result, tends to have a higher potency and more terpenes.

For many people, the only way to know if you are truly enjoying sinsemilla is to grow the weed yourself, and why wouldn’t you? The process isn’t difficult if done indoors, and if you start with feminized seeds, it’s almost foolproof.

What is sinsemilla cannabis?

Sinsemilla is not a specific plant, but rather a method that growers use to produce marijuana plants with high THC levels, by making sure that female plants do not get pollinated by male plants.

It is believed that the original seeds came from Mexico.

Where does the word “sinsemilla” come from?

The word “sinsemilla” comes from the Spanish words “sin” and “semilla”, which mean “without seed”.

You don’t have to settle for lower quality weed. Help your plant reach its full potential by keeping your flowers sinsemilla.