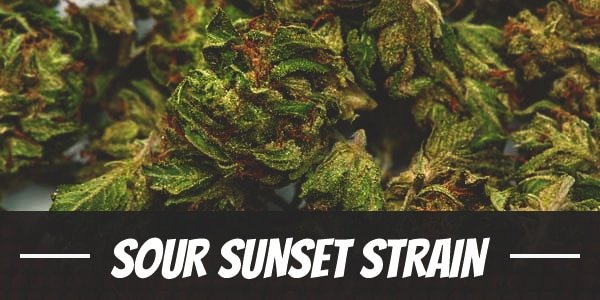 Sour Sunset truly lives up to its name. A puff of its smoke makes the face scrunch due to its sourness. Once the flavors have settled, however, a sweet tropical undertone entices the palate and delivers a rather stimulating head high. Its delicious smoke also has an appealing body buzz that provide patients with a therapeutic buzz. It gradually relaxes the muscles as well as entice one to sleep.

In creating the strain, DNA Genetics’ Crockett Family Farms used Sour Diesel and Secret Sherbet. The former laid down the base for its tangy overtones while the latter intensified it. It also laid the foundation for a sturdier Indica-leaning frame as well as dense buds.

Sour Sunset has a quick onset that begins almost immediately after the first few puffs. It starts as a gentle buzz that slowly intensifies with each puff. Its reinvigorating effects wakes users up from lethargy while starting the mind’s engine. Thus, it is not uncommon to find enthusiasts feeling ready to face the day.

At the onset, a rush of euphoria ushers in cheery memories that inspires an innate sense of happiness. The upbeat disposition is complemented by a mental clarity. Gradually, as the high continues, a surge in creativity levels manifest. It allows thoughts to flow freely and form into new ideas. Because of this, it is a great companion during brainstorming sessions or activities with like-minded friends.

After about an hour or two, the same light buzz oozes through the rest of the body. It releases tension from the muscles before blanketing users in deep-seated relaxation. Although intense, it does not immediately plant a heaviness in the limbs. Instead, it allows one to move freely like a well-oiled machine.

Sour Sunset emits a pungent scent due to its high THC levels. Opening a bag of its buds is enough to fill the room with a tropical overtone reminiscent of ripe lemon and citrus. Its tangy and fruity undertones are subtle at first but gradually intensify once the buds are either broken apart or combusted.

Sour Sunset’s tangy undertones take center stage in the palate. It entices the senses with its sweet tropical flavors as well as clear overtones of lemon and citrus. On the exhale, it leaves an equally strong aftertaste of fruit that lingers for hours even after the last puff of smoke.

Cannabinoids in marijuana are expected to dry the eyes and the mouth. Hence, most seasoned enthusiasts are not at all fazed by the subtle symptoms of dehydration taking effect. Both are mild and often go away with time. Still, beginners may down a few glasses of water throughout the day to manage any irritation. Greening out, a condition characterized by dizziness and anxiety, is also possible while smoking Sour Sunset. The keen awareness of one’s surroundings usually limits itself to a headache but users should remain cautious of the dosage.

Sour Sunset is presumably a recreational strain. However, it does provide significant therapeutic benefits to its users. Its therapeutic head-to-toe high is a reprieve against various mental and physical health afflictions. Meanwhile, cannabinoids such as CBD and terpenes assist in reinvigorating the whole body.

Stress relief is one of the best uses for Sour Sunset. It delivers an uplifting effect that raises dopamine, the happy hormone, and reduces cortisol which leads to various health complications if left at high levels. In doing so, its gentle euphoria calms down the fast-paced but overwhelming dread that stress brings. Similarly, it also manages symptoms of PTSD and other mental health issues like depression.

It induces a physically tranquilizing buzz that starts at the temples and appeases various types of aches as it oozes own to the toes. Soothing, it relieves pain while relaxing the muscles to prevent it from contracting. Its calming properties also stabilize turbulence in the gastrointestinal tract which can easily lead to vomiting. Hence, it is a source of comfort for many cancer patients dealing with the nauseating effects of chemotherapy.

The thorough relaxation eventually leads to drowsiness, signaled by heavy eyelids which continue to droop as its heavy-hitting effects persist. Its sedating properties eventually take users to bed while enhancing the quality and quantity of sleep.

The plant is the best candidate for the Sea of Green method. Its short and compact structure allows growers to cultivate more than a single seed of the strain in a single square meter. Not only does it maximize space, it also ensures that yields are higher.

It may need to be pruned often though. Its dense foliage can inhibit light and air in the lower nodes which can lead to nutrient deficiencies as well as humidity-related problems like mold or mildew. Thinning out the plant will encourage better aeration while distributing light in harder to reach areas. Strategically placing the grow lights, along with installing a proficient ventilation system, will also help.

Another way to increase yields is by using a hydroponics setup. It delivers nutrients directly to the roots. Because of this, plants experience explosive growth, doubling both bud and trichome production. However, it can be difficult for beginners to grow Sour Sunset in the medium. Hence, many prefer soil. It is not only less complicated; it is cheaper too. Not to mention, it boosts flavors.

Sour Sunset has a short flowering period of 7 to 9 weeks. It produces between 10 to 12 ounces of buds per square meter once fully ready for harvest. However, it is possible for growers to achieve more through plant training.

The northern hemisphere is kind to Sour Sunset. It blossoms between the last few days of September to the middle of October. Once it blooms, it yields at least 12 ounces of buds per plant.

Have you ever smoked or grown your own Sour Sunset? Please let me know what you think about this marijuana strain in the comments below.