How to start a commercial grow operation in Oregon 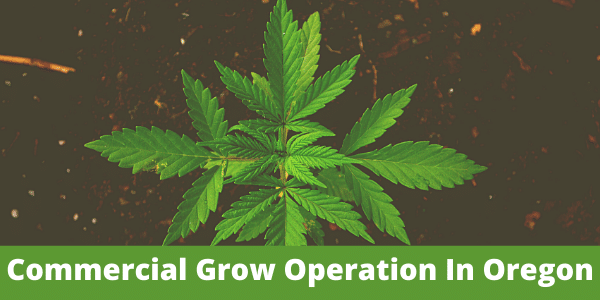 Aside from the numerous registration requirements, opening a marijuana growing operation in Oregon is similar to any other business with a few slight variations. Below is an in-depth look at the information needed to get a successful cannabis growing operation up and running in Oregon.

What kind of cannabis business can I open in Oregon?

Oregon’s marijuana market is quite popular. A February 2017 Oregon Liquor Control Commission report revealed that the state received considerably more applications for recreational cannabis businesses than expected. Instead of the estimated 800 to 1200, over 2000 applications have had already been submitted.

The state of Oregon provides a lot of useful resources for prospective marijuana business owners on its official website, including a handy eBook called “Business Readiness Guidebook for OLCC Marijuana Operations.”

Applicants are expected to submit a detailed record of their growing operation, including name, legal entity, state registration number, and contact information if they want to be considered for the initial stage of licensure.

Learn to harvest marijuana in Oregon and some tips and tricks of getting higher yields in my downloadable Harvest Guide!

Generally, the licensing process for growers is not very different from the one for retailers. There are quite a lot of restrictions regarding location. OLCC approved marijuana growing operations cannot be on federal property or share the same premises with another similar business.

Also, growers are prohibited from operating on public land or at the same physical location with another approved grow site.

Furthermore, the state requires proof that the business has adequate funding for its initial working period. During this stage, you are also expected to pay all the associated fees, which amount to a $3500 registration fee and a non-refundable $500 application fee. The application will not be processed unless payment has been received by the state.

Applicants will need to provide valid government documentation and undergo a criminal background check. A statement from local authorities and a map clearly showing the storefront location are also needed to verify that the proposed growing operation is not located in residential zones.

Authorities will also need a signed School/Dispensary Proximity Affirmation Form documenting that the proposed location of the growing operation is not within 1,000 feet of any educational facilities or other medical cannabis businesses.

The costs to start a marijuana growing operation in Oregon vary depending on a lot of factors including which county and city you are in. The registration fee amounts to $3500, and there is also a refundable $500 application fee.

Marijuana has been legalized for personal use in the state of Oregon. However, there are penalties for possessing more than the allowed amount for various situations. Read full article

On average, opening a growing operation will cost around $200,000 at a minimum, meaning that prospective owners should possess at least $400,000 in the budget to cover all unexpected and running costs.

It generally takes a while to get any business started, but plan on it taking even longer if you intend to start a marijuana business. Allow at least a year to satisfy licensing requirements, raise the necessary capital, set up your grow operation and hire employees.

Resources that can help you open a growing operation in Oregon

Looking to start an Oregon marijuana growing operation? These resources and consulting firms can help.

Faq about growing marijuana in Oregon

Is it legal to sell marijuana in Oregon?

Medical dispensaries can sell to people without medical conditions over the age of 21. However there are some conditions, For e.g. each adult may purchase no more than ¼ ounce per day, per visit.

Is it legal to grow and manufacture marijuana in Oregon

Yes, It is allowed to adults but you can only grow 4 plants of cannabis at home without fines or penalties. If you get caught for breaking this rule you can end up paying a fine up to $2,500 and/or up to 6 months in jail.

Is there any fine or plenty on delivering marijuana in Oregon?

There are no fines or penalties if you are delivering less than 1 Oz of homegrown marijuana without compensation. However, any amount over 1 Oz is subject to various fines and plenty’s.

What is a Marijuana Plant
1 Comments