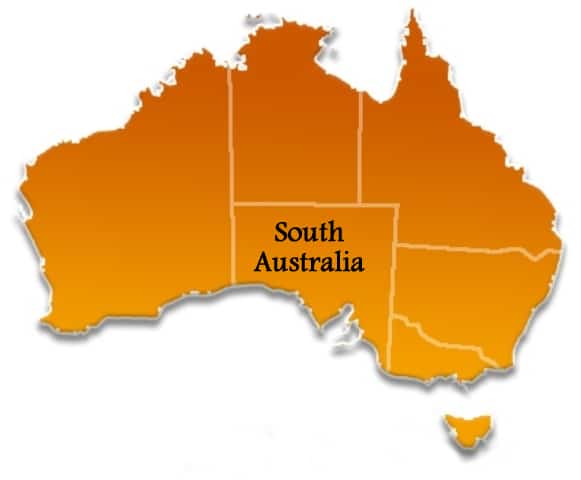 Unfortunately, due to restrictions, we are no longer able to ship to Australia. It truly pains us to not be able to help out our loyal Australian customers, and we hope this situation will change one day! Do feel free to sign up to our newsletter, download our Grow Bible, and join our community forum. That way you stay up to date for when the opportunity arises.

South Australia is in a logical location: the southern, central part of the state. It takes up the middle third of the southern coastline and borders all the other states in the middle of the country. It previously had pretty progressive marijuana laws, essentially decriminalizing possession and growing just one plant, and these laws are still in place now.

However, that could change, as the state government is discussing a “war on drugs,” which would include marijuana. Be sure to stay up-to-date with the current laws, as stricter policies could mean higher risks. Keep reading for some more information about growing and possessing marijuana in South Australia.

Australia has achieved some progress in the past few years when it comes to marijuana laws, but it still has a long way to go. In 2016 it changed its previous 1967 law so that medical marijuana is now legal under the new federal rules.

Certain people and places are having more trouble accessing medical marijuana, however, so the law didn’t immediately translate into people getting the medicine they need. However, at least the ball is rolling (even if it’s slow).

South Australia is a little bit different. The state government has apparently seen the 2016 changes as a threat, and they are therefore rolling the ball in the opposite direction, trying to tighten up on marijuana laws in general. See the bottom section for more details about that.

If you’re looking at a map of Australia, South Australia is the state in the very middle, including the southern, central coastline. It is large but not necessarily by comparison with the other states: it ranks merely fourth in land area. It ranks even lower in population size, with just 1.7 million people total. This makes it the fifth most populous state in Australia. The capital is Adelaide, and more than three-quarters of South Australia’s population lives there.

There are three types of climates within the state of South Australia. These climate types are Mediterranean, arid, and semi-arid. Parts of South Australia can get pretty hot, including the hottest temperature ever recorded in Australia (123 degrees Fahrenheit) in Oodnadatta. The southern coastline of this state is where the Mediterranean climate is, which is perfect for growing many different strains of marijuana. The arid and semi-arid climates could also work well, as long as you choose the right strain for it.

South Australia is, unfortunately, not very marijuana-friendly. While the country as a whole legalized medical marijuana in 2016, South Australia has more recently declared a “war on drugs” against marijuana and the people who use, grow, or distribute it. As of July 2018, the government was hoping to increase the penalties by quite a bit for any marijuana offenses. Two years in prison, as well as a maximum fine of $2000, would be possible under these new rules, making using marijuana a lot riskier than it was before.

These changes would basically be grouping marijuana under the same category and rules as other major illegal drugs, including heroin and ecstasy. Ironically, South Australia is where marijuana has been actually decriminalized since 1987, meaning people so far would get a mere $125 fine if they were caught possessing 25 grams or less. Now they seem to be going the opposite direction of much of the rest of the country.

Other new changes could include allowing dogs in schools to sniff out possible drugs. Lots of people oppose these new potential changes, including doctors, lawyers, and the Greens party, the party responsible for the 2016 legal changes. Let’s hope this is an example of things getting messier before they start clearing out and becoming better for everyone.

Until these changes do occur (and they might not after all), there are different laws in place. In South Australia, there is something called the Cannabis Expiation Notice. This is what police officers can decide to give offenders, and it requires them to pay an immediate (within 28 days) fine but avoid the legal prosecution process altogether. This is how marijuana has effectively been decriminalized in South Australia (for now).

This fee isn’t even considered an admission of guilt, so it is far better for the person to be able to pay this than to go through the court system. It also helps the legal bureaucracy keep their own workload and schedules clear since they have plenty of other things to worry about.

In terms of growing, there are specific limits before you can be considered for the Cannabis Expiation Notice instead of prosecution. In addition to possessing any marijuana paraphernalia, 20 grams or less of resin, 100 grams or less of cannabis, or smoking in private, you can cultivate merely one marijuana plant if you hope to fall under this rule instead of having to go to court (if you do get caught).

I’d recommend staying within this single plant limit just in case the worst should happen. And don’t worry — there are ways to really maximize your yield from a single plant. With the right amount of planning you could successfuly grow marijuana in South Australia. Happy Growing!

0 comments on “Growing in South Australia”