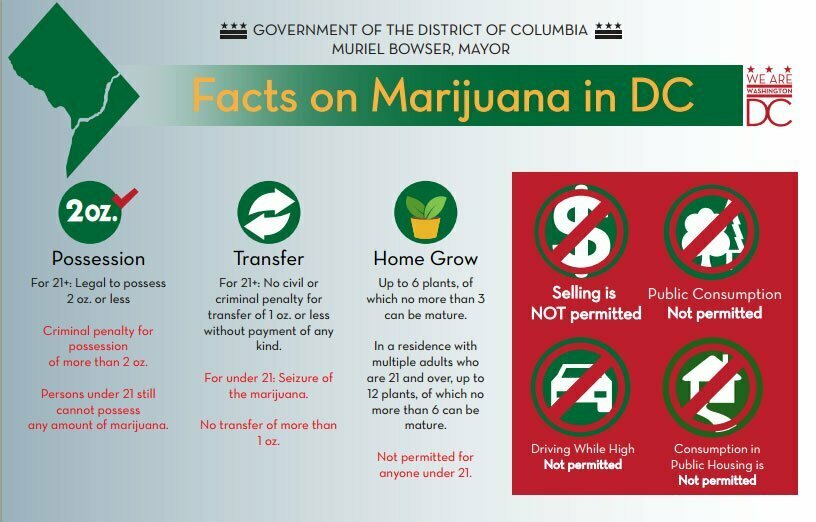 On February 26, 2015, Washington, D.C. enacted Initiative 71. It permits adults over the age of 21 to possess no more than two ounces of marijuana, without penalty in the primary residences. Gifting cannabis, without compensation, is allowed to persons over 21 years of age, as long as the gift is no more than one ounce.

Marijuana growing laws in the District of Columbia are a bit complex. Within a single home or single rental, all residents can combine their growing power. However, the total combination cannot contain more than 12 marijuana plants. No more than six of these plants can be flowering and mature.

Adults 21 years and older may possess no more than two ounces of cannabis at any given time in their primary residence. They may cultivate six plants or less at a time, but no more than three can be mature.

According to Ballot Initiative 71, marijuana must be obtained using a recommendation from a doctor if purchasing more than two ounces. Anyone who knowingly or intentionally possesses more than two ounces obtained any other way is subject to a penalty of up to $1,000 and 6 months of incarceration.

First-time offenders may give the court consent, without pleading guilty, to defer criminal proceedings. This allows the offender to be placed on probation for up to one year, as prescribed by the court. The court may or may not classify such conditions as convictions.

Washington, D.C. classifies hashish as a Schedule II drug. Possessing hashish in the District of Columbia is subject to conviction, which is punishable by up to $1,000 in fines and/or 180 days in jail.

Possessing cannabis within 1,000 feet of a private or public school of any kind, with the intent to distribute, is subject to double fines and penalties.

Any marijuana grower convicted of manufacturing or possessing cannabis products with intent to sell or distribute them is subject to a fine of up to $50,000, five years in jail or both. For first-time offenders caught with less than ½ pound of cannabis, the combination of penalties could be up to $1,000 in fines and 6 months in prison.

In Washington, D.C., first-time marijuana law offenders may opt for a deferred sentence, with the consent of the court. This allows the court to place the offender on probation, without the offender having to plead guilty to the offense. Generally, the probation period will exceed no more than one year.

Anyone over the age of 21 who enlists a minor to help distribute marijuana, or any controlled substance, faces a $10,000 fine and up to 10 years in a District of Columbia prison. Second-time offenders enlisting minors for distribution purposes face $20,000 fines and 20-year prison sentences. Any person over 21 years old who distributes cannabis or cannabis products to anyone under 18 years of age faces double penalties.

Possessing marijuana with the intent to distribute or distributing cannabis within 1,000 feet of an appropriately identified school or learning facility could lead to double penalties. These types of facilities include, but are not limited to: private and public schools, day care centers, colleges, universities, playgrounds, libraries, youth centers, video arcades, public swimming pools and public housing complexes.

Adults over the age of 21 may grow six cannabis plants or less, penalty-free, at their primary residence. However, these plants must be grown for personal use or not-for-profit transactions. If there are multiple growers in a single rental property or house, they cannot grow more than 12 marijuana plants combined. No more than six of these plants can be mature and flowering.

Those who go against these Washington, D.C. cannabis growing laws are subject to the following fines and jail sentences:

• Subsequent offense for same crime – Up to $5,000 fine and two years in prison

Some subsequent offenses are subject to up to $50,000 in fines and 5-year prison sentences for any amount of cannabis.

Medical marijuana dispensaries in Washington, D.C. may grow no more than 500 plants at any given time on site. Both for-profit and non-profit organizations may own and manage these dispensaries, which are mandated by the District itself.

Consuming cannabis is commonly done by using paraphernalia. In Washington, D.C., anyone over the age of 21 is permitted to possess, buy and use paraphernalia. Violating this paraphernalia possession law is subject to up to 30 days in jail and/or a fine of up to $100.

Anyone found violating the paraphernalia sales laws faces a penalty of up to $1,000, six months in jail or both. Subsequent violators face both 2-year sentences and fines up to $5,000.

Washington, D.C. classifies hashish as a Schedule II drug. Possessing these types of drugs could lead to drug convictions which carry penalties of up to $1,000 in fines and 180 days in prison.

The District of Columbia allows those facing first time prosecution to be given diverted sentences, and alternative and conditional releases. Such condition releases and sentencing allow the court to put the offender on probation, rather than having to face a trial. However, after the probation is completed, the person’s criminal record may or may not reflect the charge.

In Washington, D.C., a per se drugged driving law in strictly enforced. All laws attached to it forbid anyone from operating a motor vehicle with a detectable amount of marijuana, drug metabolite or other illicit drug in their systems. The disallowed threshold is imposed by the state.

Cannabis is legal for both personal and medical use in the District of Columbia. Caregivers are authorized to obtain medical marijuana from dispensaries, and legally possess it or administer it to qualified patients. These adults must be at least 18 years old, and be registered with the state as the patient’s qualifying caregivers.