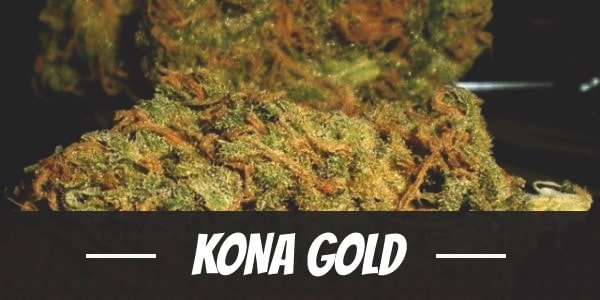 Getting ahold of Kona Gold is like striking gold in a mine. It is among Hawaii’s highly coveted strains for its tropically tantalizing smoke that lures almost anybody in for a puff. Moreover, enthusiasts are drawn to its the one-of-a-kind psychedelic effect it has on the mind and the body. Adding to its appeal is its place of origin, the archipelago’s Big Island where much of the soil is infused with volcanic minerals.

It is not uncommon to find replicas outside the wonderful island of Hawaii. After all, many find interest in how Big Island’s volcanic soil influences Kona Gold’s smoke. Moreover, it inherits the classic Sativa shape of its landrace parent.

Kona Gold is not at all overwhelming in spite of its quick onset. Its pleasant psychedelic effects are buildable as its potency ranges anywhere between 7% and 15%. As such, it is perfect for beginners and medical users alike. Still, it must be used with caution as its side effects can be quite a handful when too much of the bud is smoked.

A pure Sativa, Kona Gold hits users fast with a rush of energy after drawing in two to three puffs of its delicious smoke. Its effects are subtle though because of its moderate THC levels. Still, it intensifies with each hit until it invigorates the body through and through. The most notable effect during the initial onset, however, is its stimulating cerebral high similar to what one feels after drinking a cup of coffee.

The behavioral change is immediately obvious. Users radiate with a noticeable happiness. Some even find themselves giggling at almost anything and everything that grabs one’s attention. With inhibitions down, many turn talkative especially while reminiscing about joyful memories.

Flowing down from the temples is the same uplifting buzz. It relaxes the muscles with its gentle pressure while easing away tension. Though it plants a heaviness in the limbs, it does not at all lock users to their couches. If anything, the soothing body high keeps tiredness at bay and allows one to move freely.

Kona Gold’s tropical fragrance is enough to transport one to the tropical island of Hawai’i. Matching its zesty aroma is its astonishingly sweet notes of pineapple along with citric hints of oranges that becomes apparent once the buds are broken apart or combusted.

Suffice to say, Kona Gold is a fruity medley of sweet pineapples and mangoes. Accentuating it are citric overtones of oranges. On the exhale, it leaves a lingering tropical aftertaste.

With excessive use, Kona Gold can green users out – a condition mainly characterized by heightened awareness that either triggers a subtle feeling of anxiety or paranoia accompanied by a mild headache. This is a rare occurrence though and can be avoided through pacing and moderation.

An expected side effect of Kona Gold, and all other strains, is the unavoidable dehydration. This is because the cannabinoids in marijuana interfere with moisture production in the eyes and the mouth mainly. Both usually go away with time but, if symptoms persist, users may down a few glasses of water to stay hydrated.

Presumably, Pua Mana 1st Pakalolo Seed Bank created Kona Gold for recreation. Still, the Sativa is not without therapeutic value. Through the combined effects of its moderate THC levels, CBD, and cannabinoids like terpenes, it provides a reprieve against a plethora of medical conditions.

Chronic stress, if left unattended, can lead to the early onset of depression. In inducing a mood stabilizing high, Kona Gold calms the mind and uplifts spirits. Not only that, it helps users temporarily manage any existing mental health issues.

Apart from positively affecting behavior, Kona Gold also has soothing body effects that ease aches beginning from the temples. Its antiemetic properties also appease turbulence in the stomach and prevent users from vomiting. For this reason, it is a perfect choice for cancer patients experiencing the nauseating side effects of chemotherapy.

One of the best times to use Kona Gold is an hour or two before a meal. It encourages a hearty appetite even in people diagnosed with eating disorders similar to anorexia.

Climate and location are the top two factors that contribute to Kona Gold’s success. As a Sativa from Hawaii, it prefers the long summers of the Mediterranean and other equatorial regions where days almost equal nights in length. Under the sun for long hours, it thrives and blooms vigorously while a light breeze adds essential strength to its branches.

This is not to say the plant will not perform well in northern latitudes. On the contrary, it exhibits the same vigor as it does when in its place of origin. Rather, Kona Gold may take longer than usual to flower as days, as well as summers, are shorter. For this reason, many growers prefer cultivating their strain in more controllable environments.

Grown indoors, Pua Mana 1st Pakalolo Seed Bank recommends exposing Kona Gold to a photoperiod of 11/13 to bring out its full potential. Still, growers may use the traditional 12/12 day to night ratio recommended for almost all strains. Like a true Sativa, it grows tall. It even exceeds the average height of a man and, for this reason, necessitates early topping to keep it short. Applying the Screen of Green method while bending the plant will evenly circulate both light and air. Meanwhile, occasionally trimming dead parts will help distribute nutrients to healthier budding sites.

Pua Mana 1st Pakalolo Seed Bank has made Kona Gold available in both regular and feminized form. The latter is recommended for beginners as it assures a full female batch while the former is for more seasoned green thumbs. Clippings are also an option.

Typically, a tropical strain like Kona Gold takes a long 10 to 11 weeks to flower. Once mature, it produces an average of 12 to 16 ounces of buds per square meter. Under the expert care of an experienced grower, however, it can yield even more.

As alluded to earlier, Kona Gold prefers a Mediterranean climate similar to countries in equatorial regions. Thus, it is not surprising for the tropical herb to blossom late in the northern hemisphere – usually around the last week of October to the first week of November. It is a vigorous producer though with growers harvesting at least 16 ounces of buds per plant.

Have you ever smoked or grown your own Kona Gold? Please let me know what you think about this marijuana strain in the comments below.