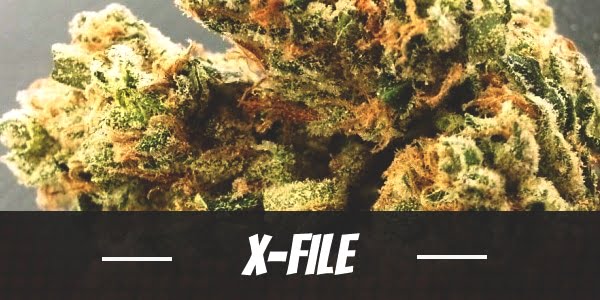 Most hybrids in the industry today are usually the result of crossing two parent strains. However, X-File breaks this norm by being a cross of three unique cannabis plants that lean toward Indica genes. Not only that, it is quite potent with THC levels of up to 22%.

Kosher Tangie lends it fruity citrus flavors along with its calming euphoria. Meanwhile, Girl Scout Cookies or GSC adds to X-File’s ability to induce a recreational high with great therapeutic value. White Fire Alien OG sews all these traits together and improves its offspring’s performance in the grow room as well as its trichome production.

X-File, therefore, is a strain that embodies the most coveted traits of its parents. It has a recreational high that takes the mind to a state of bliss. Meanwhile, its soothing body buzz calms various aches in the body while reducing swelling in inflamed areas. Finally, it is a great beginner’s grow as it is a sturdy strain that yields high regardless of where it is cultivated.

It should serve as a warning that X-File’s effects do not start until 15 minutes have gone by after the first two to three puffs. Accidentally over consuming the strain at the beginning may turn the otherwise pleasant effects into an intense psychedelic high that can be overwhelming to both beginners and veterans.

During the initial onset, a tingling sensation swarms the mind. It is marked by a rush of euphoria that brings out happy thoughts. If anything, the effects leave users feeling upbeat throughout the day. At the same time, it also sets one in the mood for a deeply relaxing backend.

The same tingling pressure trickles down from the temples to the rest of the body. It soothes each muscle in its wake. Planting itself in the limbs is a heaviness that weighs the body down into deep relaxation. In all likelihood, users eventually fall asleep either on the couch or the bed if one can make it far enough.

Typical of Indica-dominant strains, X-File is best used in the evening. Although it has significant wake-and-bake qualities such as a rush of euphoria and an uplifting head high, its comedown is heavily sedating.

X-File has the scent of crushed grapes being fermented into wine. There is a subtle sourness from its fruity overtones and hints of diesel. Broken apart or combusted, an undertone of wet soil permeates throughout the room.

Drawn in, X-File washes the mouth with the delicious taste of wine. It has notes of grape with the subtle sourness of citrus. On the exhale, a mix of diesel and earth leave an interesting aftertaste.

It is not uncommon for users to experience a little dryness in the eyes and the mouth. This is typical as all marijuana strains, including X-File, have cannabinoids that inhibit moisture production. Although mild, beginners who experience discomfort can still manage the dry spell by downing a few glasses of water throughout the day.

X-File may cause a spike in paranoia and anxiety depending on the dosage. However, it is important to note that users who have are prone to such issues will likely experience the adverse reactions regardless of the amount consumed. In such cases, it is best to stay away from taking a puff of the strain.

Through its cannabinoids, X-File provides a variety of patients relief from both mental and physical maladies. Among its best uses is temporarily managing symptoms of mental health issues like depression, PTSD, and anxiety through its happy head high.

It reduces stress while getting rid of the overwhelming dread that often accompanies it by inducing mood-enhancing and emotionally-stabilizing buzz. The mental clarity also helps patients with ADD or ADHD concentrate on tasks for longer periods of time. The sense of fulfillment is also quite beneficial as it raises morale among users feeling down.

In stimulating the mind, X-File also revives the appetite. As such, one of the best times to use the strain is a few hours before a meal. It encourages users to eat heartily by reducing any painful stomach cramps that prevent one from ingesting any food. At the same time, it has anti-inflammatory effects that reduce swelling in the stomach that often result in agonizing cramps. For this reason, too, the Indica-dominant bud is a source of relief to cancer patients experiencing nausea after chemotherapy treatments.

The tranquility eventually trickles down to the rest of the body through a soothing body high that gets rid of pain in the muscles. Feeling deeply relaxed, users eventually start to feel drowsy. Subtle at first, it later intensifies until a full night’s rest is all one longs for.

X-File is a slightly Indica-dominant strain that exhibits perfectly balanced growing traits. For example, it is relatively tall with bushy foliage. Its buds also exhibit the same structure in that it tapers on one end but is denser than the typical airy buds of plants that stretch. As such, employing a variety of methods to suit its various needs is necessary.

Among the techniques that growers must rely on is topping the plant early and pruning its side branches. Because of its height, shortening the vegetative phase will keep the plant short and manageable. Meanwhile, trimming away certain branches, as well as dead foliage, will improve nutrient, air, and light distribution among the lower nodes. This method also encourages plant health in that it lowers the possibility of moisture developing into mold or mildew.

TIP: Find seeds similar to X-File at my seed shop

A cool and dry climate is arguably best for a strain like X-File. After all, it can sometimes harbor moisture in between the crevices of its leaves. However, for growers in tropical areas with high levels of humidity, trimming the plant often is encouraged. At the same time, one may also opt to propagate it indoors where such a factor can be easily remedied by an effective exhaust or ventilation system.

During the flowering period, X-File produces chunky buds with the signature density of Indicas. It is covered thickly in sparkling trichomes and dripping resin. Each nug also smells sweetly of peach and citrus.

X-File, despite being predominantly Indica, has a long flowering period of 10 to 12 weeks. However, under the expert care of a seasoned grower, it can flower by a week or two earlier. Regardless, it will produce exceptionally with an average yield of 10 to 12 ounces of buds per square meter.

OutdoorsOutdoors, X-File blossoms from the middle of October to the earlier part of November. Each plant usually leads at least 12 ounces of buds at harvest time.

Have you ever smoked or grown your own X-File? Please let me know what you think about this marijuana strain in the comments below.