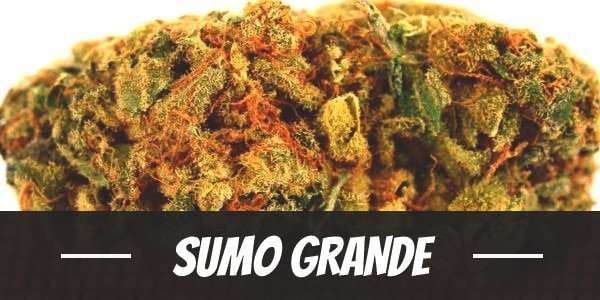 Sumo Grande is not the 1994 mid-sized SUV from Tata Motors. Rather, it is a 90% Sativa bud that could pass off as one of the most potent strains in the world.

It has a distinctly sour aroma reminiscent of citrus, diesel, and copper. However, upon consumption, its fruity flavors take center stage. It rejuvenates the palate while kick-starting the mind’s gears with its cerebral clarity. At the same time, it uplifts the mood with its smooth euphoria. During the comedown, it does not lock users to the couch with a heaviness in the limbs. Instead, it supplies a seemingly endless supply of energy so the day remains productive.

It traces its roots back to Hong Kong, a Sativa hybrid with impressive wake and bake qualities. Used in the morning, it delivers an energizing buzz that quickly eliminates negativity, so users stay positive all throughout the day. It is also notorious for inducing hunger.

The other parent is the famous Nina Limone. Another true-blue Sativa, it has a heavily tropical scent and flavor that makes the mouth water even before taking a swig of its smoke. However, that is only the tip of the iceberg. Its effects are highly stimulating both to the mind and the body.

Download my free Grow Bible and grow your own Sumo Grande!

At 24% to 31% THC, Sumo Grande could very well be one of the strongest contenders for the world’s most potent cannabis strain. While that may be up for debate, what is not is that it is better off used by seasoned users who are accustomed to the effects of high levels of THC. Beginners who smoke the bud are likely to green out, a condition characterized by anxiety and paranoia. Thus, being able to gauge and stay within one’s personal limits to THC is important.

With that said, the onset is swift – taking only a few minutes to begin. It induces a clearheaded high that sweeps away cobwebs in the mind. Improving the mood is a rush of euphoria that also inspires an innate sense of confidence. In all likelihood, recreational enthusiasts will notice a change in disposition as one turns more talkative.

Casual users, on the other hand, can take advantage of the upbeat mood to tackle challenges with high spirits. Along with the mental clarity, it creates a space for thoughts to ebb, flow, and form into ideas that resurges creativity. With sharpened focus, blazing through tasks becomes easier to do.

At the comedown, users feel tensions ease from the body as the muscles slacken. The freedom from physical inhibition will likely help enthusiasts finish more tasks. But for the contented, it opens the doors to pursuing personal projects, watching Netflix, or listening to ambient music as a means of relaxation.

Sumo Grande enthralls the senses with its aromatic blend of citrus and pine. Its sweetness is accentuated hints of copper and diesel which intensify after combusting the buds.

Notes of copper introduce itself to the palate first before it is eventually taken over by Sumo Grande’s fruity flavors. It coats the tongue in the sweet taste of citrus before introducing a diesel tang at the end of the swig. On the exhale, it leaves a woodsy pine aftertaste that counteracts the sourness.

A cottonmouth is to be expected from Sumo Grande’s moisture-inhibiting cannabinoids that interfere with saliva production. Along with it is a slight chance of red, arid eyes and a possible dizziness. Although unavoidable, users can still manage the side effects by staying hydrated and avoiding caffeinated or alcoholic drinks.

Many users turn to cannabis use for relief against stress. To this end, Sumo Grande could offer a reprieve. It has a mood-enhancing head high that pushes back negativity, melts away worries, and instills a sense of peace and calm.

Long-sufferers of depression, and other psychologically distress issues such as anxiety or PTSD, will find it to be an ally as well. Its uplifting qualities soothe the spirit and stabilize turbulent emotions. It clears the mind, fortifying one’s ability to think clearly to create better strategies that tackle problems.

Apart from managing cerebral effects, it is also an important source of reprieve against fatigue. It induces a soothing buzz with notable painkilling properties that help ease various aches and pains all over the body regardless of source, intensity, and frequency. At the same time, it eases tensions, relieves cramps, and relaxes the muscles to prevent any further contraction.

Its muscle-relaxing trait, along with its stimulating onset, entice patients with anorexia to eat heartily – without fear of the stomach suddenly contracting due to food being reintroduced.

Sumo Grande stays true to its Sativa genes. It grows at least 6 feet and has long internodal spaces. In spite of its height, it is not at all thin. On the contrary, it has a well-developed structure comprised of strong stems and equally hardy branches. Even better, it has impressive resistance against many common pests and diseases.

Some growers prefer cultivating the plant indoors where it is easier to control factors like lighting, temperature, and humidity. 600-watt HID lights, for instance, aids in better bud production per square meter especially when paired with a 12/12 light schedule. Installing fans and situating it toward the top, where the heat emitted by the light can be too intense, will keep the plant cool. Meanwhile, a proficient ventilation system enhanced by a carbon filter will diminish the pungent odor that Sumo Grande produces.

The plant must be topped early to control height. Advanced growing techniques such as the Screen of Green also helps keep the plant short by encouraging lateral growth.  This is done by weaving the branches to the net and bringing up the lower nodes. Coaxing the bud will help it produce multiple budding sites that will, undoubtedly, boost yields.

It grows vigorously outdoors. In fact, its branches might even need extra support. Its buds are larger and heavier than its indoors counterparts. If left unattended, the plant could droop, or its branches could snap. A trellis is an excellent way to provide support for its thin branches, without inhibiting light absorption and air circulation.

After flowering for 10 to 12 weeks, Sumo Grande yields between 12 to 16 ounces of buds per square meter.

It takes Sumo Grande quite a while to fully flower in the northern hemisphere. But the long wait is worth it since a single plant can produce at least 16 ounces of buds even after drying and manicuring.

What is the Sumo Grande strain yield?

Sumo Grande yields 12 to 16 ounces per square meter indoors and 16 ounces or more per plant outdoors.

How much THC does Sumo Grande have?

What are the origins of the Sumo Grande strain?

Sumo Grande was created from a cross between the Hong Kong and Nina Limone strains.

Have you ever smoked or grown your own Sumo Grande? Please let me know what you think about this marijuana strain in the comments below.