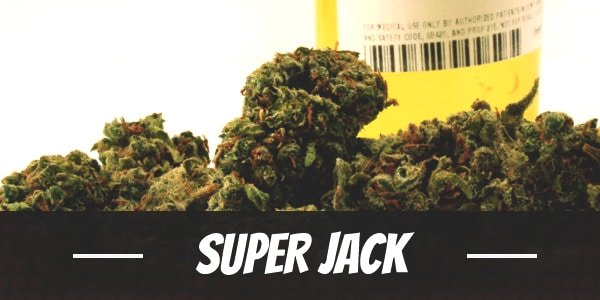 Every stoner has their own personal preference when it comes to the type of high that they want to experience with their chosen strains. This is one reason why cannabis breeders develop different levels of tolerance to the common effects of marijuana.

While some prefer a kind of high that is heavier on the body, others find more satisfaction in strains that offer a great deal of mental stimulation. Consequently, these effects can also vary in their intensity. Some users, especially those new to the game, oftentimes stay away from strains with overwhelming effects.Seasoned users, however, love to bask in the consuming high of some varieties.

Speaking of strains with overwhelming high, there is one particular variety that offers a strong cerebral stimulation yet maintains a very functional high. This strain is called Super Jack. If one needs a little boost to start the day, Super Jack can certainly guide the way.

Super Jack or Super Jack Haze is the child strain of two of the most recognized cannabis varieties in the market, the Super Silver Haze, and Jack Herer. The strain has no known breeder. Hence, there are certain details about its profile that are pretty vague and inconsistent.

Nonetheless, Super Jack maintains a reputation of being one of the most sought after strains among seasoned users who enjoy a potent cerebral high.

First of all, there is a varying set information regarding the strain’s genetic profile particularly in terms of its exact Sativa to Indica ratio. Since the original breeder of the strain remains unknown, no one can really verify the said information.

However, judging by the strain’s most commonly reported effects, it appears that the strain is 100% Sativa. Either way, without a doubt, Super Jack is indeed a Dzsuper sativadz due to its highly potent mentally stimulating properties.

Users of Super Jack can expect to experience a great deal of head buzz that is mostly characterized by an uplifting and energetic mood. This effect helps improve focus and can easily induce social behaviors such being talkative, giggly and whatnot. Consequently, the strain offers its users an upbeat and happy sensation that is greatly beneficial in social gatherings.

Now, the good thing about the strain’s mental high is the fact that it may be a bit overwhelming but it will not likely leave one immobilized. On that note, users of Super Jack can collectively agree that the strain is an ideal wake and bake strain due to its stimulating and motivating effects.

Unfortunately, novice users may have to gain more experience before they can enjoy Super Jack as the strain is quite a force to be reckoned with given its 23%maximum THC level.

Super Jack mostly smells like a sweet and rich butter. When burnt, the strain gives off a somewhat spiced citrus scent with a distinct hint of pungent earth and herbs. If one loves the classic pungent aroma of weed with a kick of butter, Super Jack is certainly one to satisfy that preference.

With regards to Super Jack’s flavors, users will notice an interesting yet delightful mix of sweet tropical fruits coupled with the richness of butter and a slight tinge of pine and spice. The sweetness of the strain is especially prominent upon exhale.

Aside from the Super Jack’s THC level, prospective users should also be watchful for any signs of adverse reactions from smoking the strain.

To wit, Super Jack has a great potential of inducing anxiety. Hence, it is best for users who are susceptible to the condition to avoid this strain. Aside from anxiety, Super Jack may also cause users to experience dry mouth that is often accompanied by drying of the eyes.

In rare occasions, some users may feel dizzy and paranoid after smoking the strain. Hence, users with low tolerance should pass on this strain and avoidoverindulging.

On top of the uplifting euphoria brought by Super Jack, it is also known as amedically valuable strain.

Due to the strain’s ability to instantly improve a user’s mood, it can be beneficial to patients dealing with stress and depression. At the same time, Super Jack has also been reported to help ease symptoms of fatigue and mild pain, including headaches.

In terms of Super Jack’s cultivation, some of the data available on the web can be a little vague and inconsistent. Nonetheless, the widely accepted information about the strain’s growing behavior is that it can thrive in either an indoor or outdoor setting with soil as its preferred growing medium.

Also, the plant is not the easiest type to grow, so it is not the best choice for novice growers who are yet to learn the techniques of cultivating cannabis. However, with sufficient attention and care, Super Jack can reward its growers with an abundant yield.

Indoors
Indoors, it may take 65 days for the buds of Super Jack to fully mature. Once they are ready for harvest, growers can expect a total yield of about 16 to 20 ounces per square meter.

Outdoors
Most growers claim that the plant can thrive better outdoors. Hence, by early October, the overall outdoor yield of Super Jack can reach as much as 21 ounces or more per plant.

Have you ever smoked or grown your own Super Jack? Please let me know what you think about this marijuana strain in the comments below.