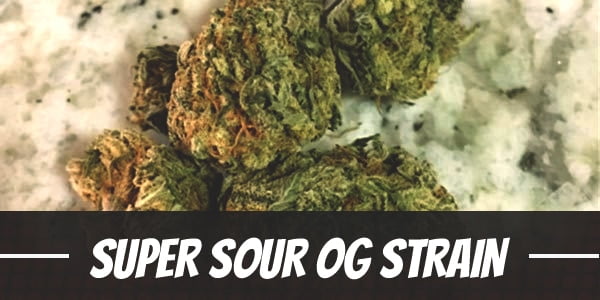 Perfectly balanced hybrids are a rare breed in the industry and Super Sour OG is among them. It delivers a perfect combination of head to body effects beginning with a rush of euphoria. It later tapers into a relaxing high that crushes stress beginning from the temples.

In creating the strain, breeders at the Emerald Triangle first crossed three legendary strains – Blueberry, Sour Diesel, and OG Kush. The result was a fruity strain with strong overtones of citrus and diesel. Hence, its name Super Sour OG. Not to mention, Lost Coast OG was later added which only further enhanced its terpene profile as well as its revitalizing effects.

Apart from being an impressive recreational strain, Super Sour OG also contains various therapeutic benefits many patients appreciate. It not only crushes but also reduces different types of pain while reducing inflammations. For this reason, it can be a reprieve against a myriad of conditions.

Super Sour OG delivers an uplifting high that starts almost immediately after the first two to three puffs. Because of this, users should pace consumption of the bud by starting with low dosages. Gradually building it up will keep the experience light and pleasant.

A change in behavior is immediately noticeable during the onset. Users seem happier as smiles broaden from ear to ear. Cheerful thoughts rush in the mind and instill a deep sense of happiness that lasts for hours.

It is best to prepare snacks ahead of time before smoking Super Sour OG. Once its stimulating effects settle, it also invigorates the appetite. Hence, having food nearby or about an arm’s length away will make it more convenient for users who want to bask in the head-to-toe effects of the hybrid.

In about an hour or two, a light pressure oozes down from the temples. It envelops the body in a soothing sensation as it surges through the muscles. Subtle at first, it gradually intensifies until users are fully relaxed.

Super Sour OG has a sour fragrance that is reminiscent of freshly squeezed lemon with crushed blueberries. It reinvigorates the senses with its citric scent and acrid diesel that intensify once the buds are broken apart. Combusting it, on the other hand, produces a sweet berry aftertaste.

Bursting in the palate is a sour overtone that makes the lips smack. It has a citric overtone complemented by hints of diesel. Enhancing it is a delicious blend of berries and blueberries. On the exhale, it leaves a fruity aftertaste with a hint of sweet honey.

Dry eyes and a cottonmouth are common reactions to marijuana smoking, especially once the cannabinoids begin to interfere with moisture production. It is sometimes accompanied by dizziness. However, it is easily manageable by drinking a few glasses of water throughout the day.

Presumably, Super Sour OG is a recreational strain. After all, that has been the predominant outlook on cannabis for the longest time. Still, it provides patients with a reprieve against a myriad of afflictions through the same cannabinoids.

Its psychoactive compounds deliver a happy high that improves mood. IT clears the mind of negativity as well as overwhelming feelings of hopelessness. Meanwhile, the soothing euphoria that its up to 1% CBD delivers is enough to ease the anxiety and stress that come with life. Because of this, it can also manage symptoms of depression and other mental health issues like PTSD.

One of the best times to use Super Sour OG is right before a meal. It stimulates the appetite so users can eat heartily. Before anything else, however, it first soothes the gastrointestinal tract along with the rest of the body through its analgesic properties. Its anti-inflammatory effects on the other hand, reduce redness and swelling.

The freedom from physical and mental inhibition is a source of relief to patients. Drowsiness eventually follows as it continues to persist. With its sedating effects, it enhances the quality and quantity of sleep.

Super Sour OG has an impressive growth profile. It is short with very few fan leaves that inhibit light and air circulation around the lower nodes. Not to mention, it is quite compact due to its tight intermodal spacing. This makes it the perfect strain to grow indoors.

It will need to be pruned when cultivated inside controllable environments though. In spite of its few fan leaves, Super Sour OG still produces dense buds and foliage that can harbor moisture. If left unattended, it can develop into mold or mildew which may stunt its own growth. However, it rarely needs to be topped early.

Utilizing the Sea of Green method maximizes space by planting more seeds in a single square meter. Meanwhile, the Screen of Green method improves light distribution to produce more budding sites. It requires installing a screen above the current canopy during the vegetation period and weaving the branches through the net. Either way, both will significantly improve yields.

The high-yielding strain produces at least 64 ounces of buds per square meter. Indoor harvest usually comes within 8 to 10 weeks after initiating the flowering period.

Super Sour OG matures between the middle of October to the last week. At harvest, it yields up to 64 ounces of buds per plant.

Have you ever smoked or grown your own Super Sour OG? Please let me know what you think about this marijuana strain in the comments below.