Home › Medical › The Effects of Marijuana

Although it is now fairly well known that there are major pros of marijuana, many people looking to use medical marijuana for the first time have some serious questions about it. Is weed good for you? What are the effects of smoking weed? What are the benefits of weed? The most important of these questions is, of course: is marijuana good for you in the long term? The fact of the matter is that there are some long-term marijuana effects, some of which are good. Let’s look into the marijuana health benefits, the marijuana effects on the brain, as well as the bad effects of weed.

The effect of being high

In large part, marijuana acts as a psychoactive, or consciousness-altering, drug. It has definite therapeutic effects that alleviate a wide range of ailments while providing minimal physical side effects.

Marijuana uses chemicals known as cannabinoids to deliver its mind-altering messages to the brain. If you’ve heard of anything about marijuana, you probably know about the most psychoactive of those cannabinoids: THC (or, delta-9-tetrahydrocannabinol). THC works, in large part, at the higher centers of the brain that influence consciousness. Cannabinoid receptors are concentrated largely in the brain’s hippocampus—a section that oversees the higher functions of memory, feelings, and action. When marijuana is introduced to these higher brain systems, you’ll find some of its most effective medicinal benefits. It will affect the perception of pain, mood, hunger, and muscle control but might also produce secondary effects in bodily tissues like immune system cells.

The most common sensation that marijuana users report is pleasure, which is, of course, why it’s used recreationally as well. For some people, though, marijuana’s effects can be extremely discomforting. Indeed, just like any psychoactive drug, marijuana will have different effects on different people depending on physiology, mood, temperament, and Dr. Timothy Leary’s famous set and setting (i.e. “the initial mindset of the user and the surroundings in which the user gets high,”).

Some of the most common experiences of “being high” include: 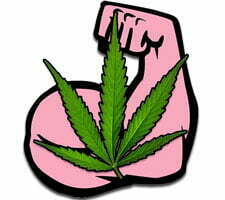 While many people talk about the feared negative effects of the long-term use of marijuana, what is less talked about in the news and media is the benefits of smoking weed over the course of a long period of time. There is plenty of research to support the numerous long-term health benefits of marijuana, as it has been studied for quite a long time now.

People who smoke marijuana long-term are actually known to have fewer muscular problems and pain in general than people who don’t, among other positive effects of marijuana. Part of this has to do with the fact that people who are using marijuana to handle any pain they might have don’t need to take any sort of pharmaceuticals that come with major side effects.

People have wondered if using marijuana will cause cancer, but there is no evidence to show that patients using marijuana long-term have any malignant disturbances. The same goes for any sort of brain deterioration or damage over a long period of time — according to studies, there is no such damage. Marijuana’s effect on the brain remains more or less short term.

The positive effects of weed can be massive, especially when considering the medical benefits of marijuana. In fact, marijuana can actually reduce the chance of people getting cancer or tumors to begin with. This includes head and neck cancer, lung cancer, testicular cancer, and glioma. This is because the specific cannabinoids in marijuana can actually serve as antitumor compounds.

In the short term, there are some useful benefits of medical marijuana. Not only does it make the user feel euphoric, but it also stimulates creativity and can relieve pain and relax muscles. Some kinds of marijuana do an excellent job with lowering stress or anxiety. The “marijuana drug” can be more effective than any anti-depressant.

The risks of marijuana 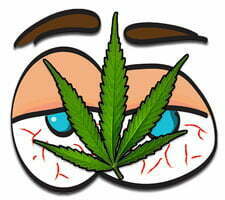 It would be unethical to talk about the marijuana benefits without also including the negative effects of marijuana as well. It’s been noted that central-nervous-system damage is possible, but it seems to be reversible. There are also indications of some subtle cognitive impairment.

Studies of animals have shown that large quantities of THC lead to the male producing less viable sperm, and the female having a disrupted ovulation cycle. It is unclear as to whether this is also true in humans or not, but is should be considered just in case.

If you are suffering from a mental illness, there are some marijuana health effects that could be extremely helpful to you. It could also have the opposite effect, exacerbating feelings of paranoia, depression, or anxiety (especially once you are no longer high). If you suffer from a mental illness, you will need to choose the strain of marijuana you smoke carefully so you can have the maximum beneficial effects of marijuana without the negative ones.

There is a small chance of dependency developing, which is not exactly the same as a drug addiction because it’s a want rather than a need for more. That being said, it is estimated that about 10% of people who smoke marijuana regularly over the course of a long period of time develop this dependency, or “marijuana addiction.” This is because THC gives the brain pleasure, and the desire for more pleasure is normal. Some consider this a weed addiction.

Smoking marijuana and your lungs 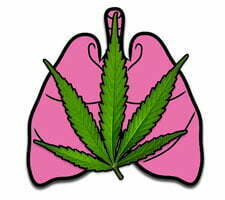 Everyone knows that inhaling smoke into your lungs isn’t good for you. But what are the marijuana effects on lungs? Most people associate it with a risk of lung cancer, even if it’s marijuana smoke instead of tobacco smoke. That being said, some interesting studies are showing that perhaps the smoking weed effects aren’t as bad for your lungs as you might expect. This could be because of THC effects, which have been known to possibly have some anti-tumor components. Of course, scientists aren’t exactly sure yet — the weed effects are still under major research.

According to recent studies, people who use marijuana regularly are actually just as likely as any other (non-smoking) person to get lung cancer. This may seem impossible, but another study done at Emory University in Atlanta showed that people who smoked regularly (daily) for 20 years didn’t even have any lung damage. According to some other studies, smoking marijuana does still leave that black tar on lungs, but this doesn’t correlate with a higher risk of lung cancer as it would with cigarette smoking.

That being said, there are certain risks or negative weed side effects you can expect if you are a regular, long-term smoker of marijuana. This includes some reduced capacity in making full exhalations (after 20 or more years of daily smoking), as well as some inflammation in the tubes that connect to your lungs. This can mean breathing trouble with symptoms similar to asthma. One way to combat these possible cannabis effects is to vaporize instead of smoke. This is considered the healthiest way to smoke weed. 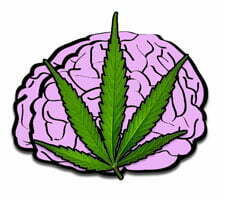 Many people ask, “can you overdose on weed?” The fact is, an overdose with marijuana, at least in the way we typically think of drug overdoses, simply doesn’t happen. You won’t die from smoking too much marijuana all at once. That being said, smoking too much marijuana certainly wouldn’t be pleasant. Side effects of an “overdose” would include panicking, loss of self-control, racing thoughts, disorientation, and sometimes even dizziness, headaches, and nausea. A person who has overdosed on marijuana could even go unconscious temporarily, but death from a marijuana overdose has never been reported.

Thanks for reading and don’t forget to download my free grow bible if you consider growing your own medicine.

BACK TO TOP
15 Comments