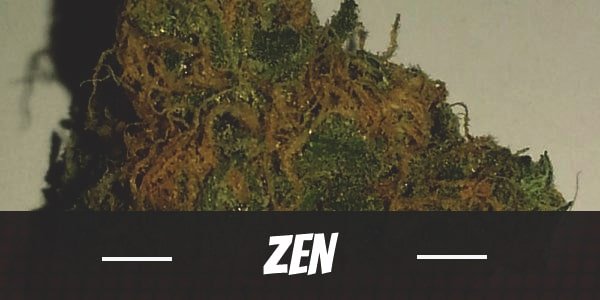 CBD Seeds picked its name for a reason, that is to breed high CBD strains for medical use. Even so, many recreational users have also found their hybrids pleasing to use. One of them is Zen.

Zen originated from the Japanese pronunciation of a Chinese word that refers to meditation. Because breeders often name their hybrids after traits, among others, it is a fair assumption for some that the strain can do that – to provoke deep thoughts. Of course, that is not true in the case of this hybrid. Instead, it promotes mild effects.

Zen comes with around 10% THC making it underwhelming with regards to psychoactive traits. However, it more than makes up by having up to a whopping 8.6% CBD. So, while it may not appeal to people who desire a stronger hit, it has its fair share of users, especially among the medical cannabis users.

To develop Zen, CBD Seeds first crossed a Mexican Sativa with an Afghani Indica. After, they paired the offspring with Lavender. The result is a balanced hybrid that has an almost 1:1 THC to CBD ratio. Besides its medicinal use, it should satisfy the needs of those who are looking for a mild strain and gentle hits.

About the closest that the strain comes to meditating is that it clears the mind. Often, following mental clarity as well as having a sharper focus, users also feel an uplifting sensation. Such trait can swing the mood and induce happiness. Soon, the reinvigorating feeling creeps into the body. Users, feeling energized and relaxed, are able to remain productive.

For the next couple of hours or more, people using Zen are often cheerful. There are none of the intense buzzing effects that can become overbearing. It is not likely to cause any sedating effects rendering users immobile or lethargic.

Because of its low THC and high CBD content, Zen is marketed as a medical cannabis and rightfully so. Unfortunately, this may also be a reason for some recreational users missing out. As alluded to earlier, some people are looking for gentle hits and may actually end up passing up on Zen thinking it is only for medical use.

Zen does not only come with mild effects but also with its aroma. It has a blend of herbal and earthy scent as well as a sweet and fruity note. In a sense, its pleasing smell aptly sets the tone for the gentle hit it provides.

The sweet taste that is reminiscent of its Afghani heritage is evident. Mixing with its refreshing, earthy tone is a delight that is made more pleasurable by a citrusy aftertaste.

One thing to note about using Zen is that it can cause some people to have a headache. While it does not pack a punch, that does not mean that it does not cause any adverse effects.

Typically, using cannabis can also cause other conditions. Among the most common ones are dry mouth and dry eyes. Others may include anxiousness or dizziness.

The exceptional thing about Zen is its high CBD content. Because of that, medical cannabis users may seek out this strain to help them deal with specific illnesses, the ones that respond to CBD and that includes epilepsy, seizures, and some tremors. There are many other illnesses. However, the effectivity of using high CBD cannabis remains anecdotal.

Meanwhile, most of the people who do use Zen benefits primarily from its uplifting and relaxing traits. In particular, people who are undergoing stress should find comfort with its use. Even those who are suffering from depression and related conditions will also benefit from its mood-enhancing properties.

Growers can cultivate Zen indoors or outdoors. Inside the house, while there is the choice of using hydroponics, it is best to use soil as a medium. That is not only to preserve its flavors, but also the potency of its CBD.

It is not the most difficult strain to cultivate, but it does require more attention. As such, the plant is best grown by people who have prior experience growing cannabis. That, of course, is not to say that beginners cannot start off with this plant. But because it does not produce a lot of buds, a better option for novice growers is to choose another strain.

It takes up to 10 weeks before the plant is ready for flowering. Once mature and ready, growers can pick up some 8 to 12 ounces per square meter.

Zen thrives in a warm climate where there is plenty of sunshine but has ample shading. It starts flowering late in October with each plant producing around 12 ounces of buds.

Have you ever smoked or grown your own Zen? Please let me know what you think about this marijuana strain in the comments below.