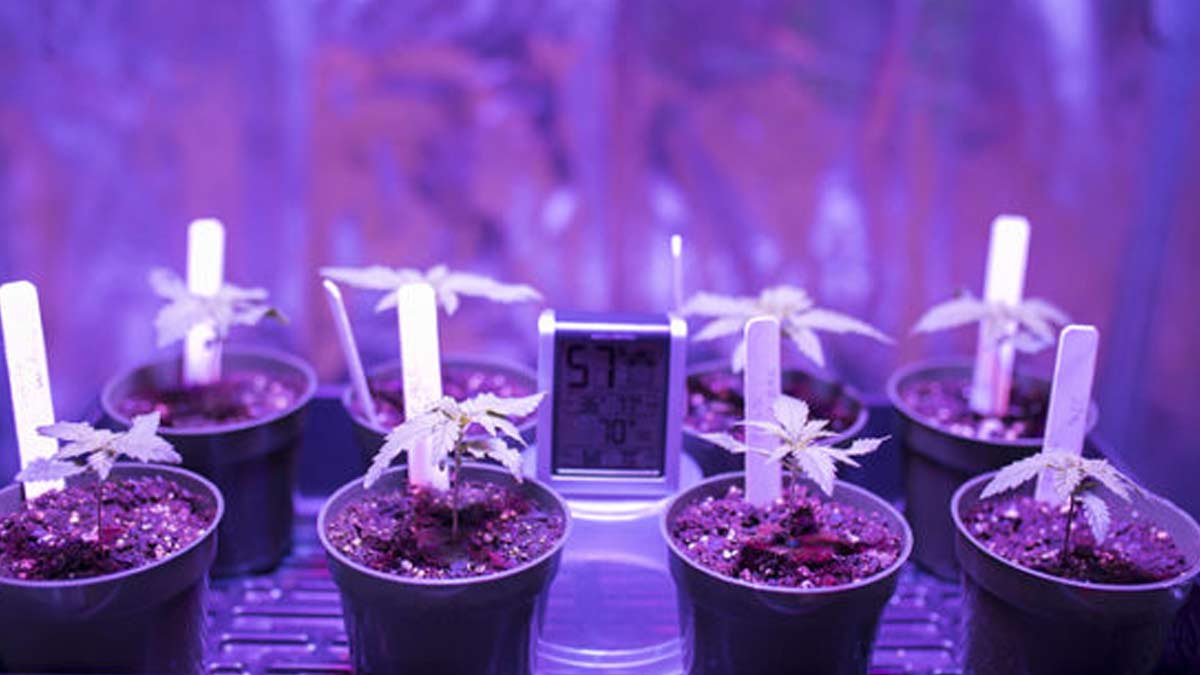 For first-time growers, marijuana tends to grow slower in soil than in hydroponics during the vegetative stage. Soil also usually gives lower yields of marijuana. For this reason, hydroponics are preferred. They also provide total control over nutrient levels!

This grow journal chronicles growing White Widow in a hydroponic system for the first time.

A 2x4x7 tent houses the system. 6 seedlings germinate in Rockwool to retain more moisture. Rockwool also allows air to circulate. A humidifier maintains dampness 30%. The set up also includes one L600 Kind LED lamp on a 20/4 light cycle. No fertilizer was used so far. The seeds are receiving water with pH 5.5 to 6.0.

These photos show 5 out of the 6 seedlings have already sprouted. This was taken a week after they were put in the Rockwool medium.

You can see a yellow tinge appearing on the leaves. The plants were continually sprayed with pH-balanced water containing 0.5mL/g of Thrive Alive red. The bottom of the tray is also filled with the same solution to promote root growth. Their light source is maintained at 27” above the seedlings.

For now, the seedlingswere transferred in the net cups with the hydroton and LECA at the bottom. They’ll continue to grow in the germination trays a bit longer. Temperature is maintained at 72° F and moisture is at 61%.

The girls are looking better today. There were some challenges along the way. The temperature for the reservoir water keeps rising to 74° F but it dropped to 70° F after adding ice packs. The pH also seems to play around 6.5-6.9 but it never went beyond 7.0.

It’s the second week of germination! Their nutrition was supplemented with pH balanced water with thrive alive at a PPM of 120.

The babies look good and you’ll notice they have taken on a darker hue of green. The root growth is good. Reservoir temperature is a lot lower at 67.5° F. The room temperature is kept at a perfect 71.7° F. Room humidity is at 51%. pH plays between 6.4 to 5.8. PPM slightly went up to 174.

The plants continue to grow and the roots seem clean. The system has a top water feature which is set to turn on for 15 mins. 4 times a day. They’re set near the edge so the Rockwool doesn’t get too soaked.

Two plants started to show brown spots at the bottom leaves. Hopefully, a reservoir and nutrient change can prevent any ill effects.

Their reservoir is now a solution of:

Changing the reservoir was such a pain because it just seemed so slimy after a week. The top feed has already been discontinued.

3 weeks from seeding, the bottom leaves with the brown spots have stayed the same. The purple stems from a few days ago have already turned green. More white roots are coming out now. Some of the roots submerged in water are slightly discolored and knotted but they’re looking better every day. You can’t see it but the plants are already giving off a scent!

The PPM is right on target at 665. We can add 50mL sugar daddy at this point because it’s a flavor terpene enhancer and isn’t really needed.

The reservoir underwent some rehabilitation. The plants’ top water feed system was removed. The holes where the top water lines used to be are now covered with tape. Even the air holes were taken out and cleaned because they were covered in brown gunk. 30mL of HydroGuard was added to the reservoir.

The plants are finally getting bigger so they’ve been spread out. One fan was added directly above the plants for better ventilation.

Adjustments on the nutrients brought the pH to the sweet spot of 5.8. Current PPM is 680.

You can see the brown spots progressing on the leaves. The plants are getting bigger though and seem to be in pre-flower stage.

The PPM and pH are maintained at 705 and 6.1 respectively but the brown spots are still progressing! They start as light spots in the middle of the leaves and spread, turning the leaves brown and crisp. The new growth looks good but the affected leaves look like they can crumble if you pinch them.

The one plant that doesn’t have problems looks like it’s dampening off. It has the whitest roots you’ve ever seen and the water is so clear.

Only four plants remain now. It’s a sad day because the “damp plant” had to be pulled out. They’re reservoir’s been changed too.

After 2 hours, the PPM showed 1125. PH is still 5.9. Water temperature seems to be an ideal 65.5° F, air temperature’s 79° F and room humidity is 38%. The plants look dense and moving leaves here and there helps expose new growth.

They look worse today! This may be a toxicity issue. Hopefully, taking out half of the water in the reservoir and replacing it with plain pH water will improve them. PPM is 670.

Things are finally looking up! It’s been a couple of days since they were treated for nutrient burn. New growth seems healthy. The babies are drinking a lot. A few gallons of plain water were added to their reservoir and the current PPM is 575 with pH 5.7.

There’s a lesson in all this: don’t be overzealous with the nutrients!

Added 4 more gallons of water tonight! The plants are looking so much better now.

Another reservoir change today and the plants look happy!

This isn’t really an emergency but the plants are getting so big, they’re starting to tip the net cups out of the unit! They’re all leaning a lot. As you can see, they’re taped to the lid as a temporary solution.

Plants have perked up. They’ve been receiving light from 110w CFL. A 300W LED side light is arriving next week. Hopefully, that will be enough to penetrate the forest.

Here are the ladies all tied up with the new side lights installed. Hopefully the new lights treat them well.

The reservoir water’s been replaced again. The plants are now sticky with resin and are starting to grow even more flowers!

After recalibrating the TDS meter, the PPM reads at 620. You can see some of the leaves seem burnt because the side light was too close. Moving it outside the tent should do the trick. All in all, things are on track! Onward ho!

Took the AK47 out today! It’s still drying but it already smells so bloody delicious!

The White Widows are progressing well! They received some pre-harvest flushing with Sugar Daddy and a little CalMag for 3 days. Afterwards, they’ve received pure water for 4 days.

Harvest of the White Widows! They’re hanging upside down to dry.

This growing cycle had its ups and downs. Being impatient for is understandable. Remember to not be overexcited with adding too many nutrients. Too much of something may do more harm than good!

You can learn from many resources online but growing marijuana also takes time, patience, and a little common sense. Make sure to download the free marijuana grow bible and learn to grow like a pro!